Thousands of dollars from outside groups have poured into Indiana's 5th Congressional District race, but it's more consequential for those here.

Voters line up to cast their ballots early voting at the City-County building in Indianapolis, Tuesday, Oct. 6, 2020. Indianapolis Star

Thousands of dollars from outside groups have poured into the Indiana 5th Congressional District race and Washington D.C. politicians, pundits and journalists have all weighed in on what could be one of the closest House races in the country.

The district, one that contains one of the richest suburban counties in Indiana, is a perfect case study on whether Democrats will continue to pull away suburban voters from Republicans, even in a district that President Donald Trump won by nearly 12 points during the 2016 election.

But for those who live in the 5th district, the race should be even more consequential: Whoever wins on Nov. 3 will represents this bloc of voters in D.C. for at least two years. The district stretches from the northern part of Marion County to the city of Marion on the north and contains all of Hamilton County.

Republican Victoria Spartz and Democrat Christina Hale are facing off in the heated battle to replace retiring Republican Susan Brooks, someone who branded herself as a moderate Republican. Libertarian Ken Tucker is also running.

Earlier this month, FiveThirtyEight rated the race a toss-up, becoming the last prominent ratings agency to do so. Its statistical analysis gave Spartz a slight edge over Hale. Plus CNN and FiveThirtyEight have labeled it one of the 10 most likely to flip House seats.

Here's what’s at stake in the 5th district during this election:

Perhaps the biggest difference between Spartz and Hale is how they view the government's role in people's lives.

Spartz's childhood in Soviet-controlled Ukraine at least in part instilled in her a belief that government involvement is inherently bad and ineffective and should only be used as a tool to incentivize society's betterment.

“I was born in a country that doesn't exist anymore, for good reason,” Spartz told IndyStar earlier this year. “Unfortunately there are a lot of socialistic trends in our country and it breaks my heart, because that's not what makes our country the greatest in the world.”

One of her primary goals during her time as a state senator was to reduce government regulation. For example, she pushed for a bill that gave property owners more rights when authorities condemn private property and wrote another that removed state oversight of certain wetlands near what are called regulated drains.

She also wanted to limit what she viewed as government infringement on second amendment rights, and touted that fact in ads during the primary. Plus, she thinks the government should largely stay out of health care.

Meanwhile, Hale thinks the government should be helping struggling people more. She often references her time as a single-mother in college when she didn't have health insurance and was juggling school and work.

"Your life doesn't always go as you planned it, but sometimes you just need little interventions to keep you on track," Hale told IndyStar, "to make sure you go ahead and finish and complete that degree."

Hale supports a government health care option for all who want it and supports expanding affordable childcare and early childhood education, an option that would likely need more government money. She also is pushing for universal background checks.

The major exception to this dynamic is the two candidates' views on abortion. Hale thinks women should have a choice, while Spartz told IndyStar last month that she is opposed to allowing abortions except for when the mother's life is at risk. Previously during the Republican primary, when asked in what situations, if any, should abortions be permitted, she did not list any exceptions.

Democrats could strengthen their majority

Regardless of if Hale or Spartz wins, Democrats will likely keep their majority in the House, according to political pundits.

As of Oct. 16, FiveThirtyEight gave Democrats a 96% chance of keeping the House majority. That means if Spartz wins she would likely join the minority in the House, whereas Hale would likely be a member of the majority.

According to FiveThirtyEight's analysis, there's also a 63% chance Democrats could win the House, presidency and Senate.

Instead of determining whether the House can flip, the 5th Congressional District election might determine how much control the Democrats have, and how easily the party can get their agenda passed.

"If you don’t want Democrats to push certain things through, then you want Spartz to win," said Chad Kinsella, a political science professor at Ball State. "If you like the Democratic agenda, especially if Joe Biden wins, you’d want Hale to keep that vote and push things through."

Hale, for the most part, is in line with other Democrats on the issues. She has, however, indicated her support for keeping a private health insurance option, instead of moving to Medicare for All. A Kaiser Family Foundation poll found from earlier this month found that 77% percent of Democrats either strongly or somewhat support Medicare for All.

Spartz, on the other hand, would likely join other Republicans in opposing certain Democrat-supported reforms.

Spartz might struggle more than Hale to get bills passed

If Democrats do control the House, Spartz would also likely have to work across the aisle more than Hale would to get any of her bills passed.

"It is hard but not impossible for representatives from the minority party to effectively pass their legislation," said Laura Merrifield Wilson, a political science professor at the University of Indianapolis. "Historically, we have seen minority representatives most effective when they are willing to work across the aisle and utilize their connections and networks strategically to leverage support for their legislation."

That's something Hale is used to doing, and something she often boasts about in her ads. She was in the minority during her time as a state representative, meaning if she wanted to get something passed, she had to team up with a Republican or two. She was only the lead author on one bill that passed during her time in the Statehouse, and that one bill was coauthored or sponsored by seven Republicans.

Her work in the Statehouse helped earn her the support of one current and one former Republican superintendent of public instruction, Suellen Reed, who is featured in a campaign ad for Hale, and Jennifer McCormick, who has endorsed other Democrats. 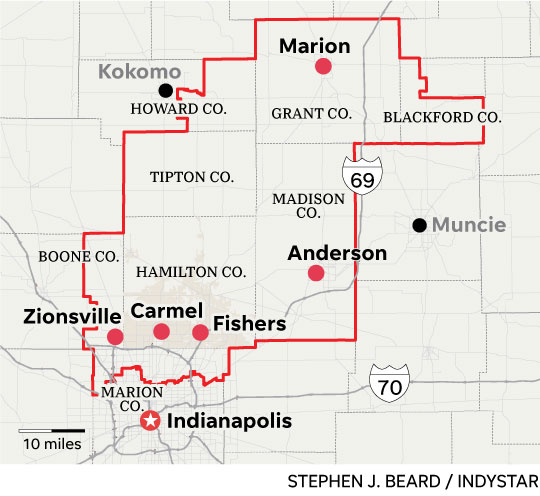 Spartz was in the majority in the Senate, so she did not need the support of any Democrats to get her bills across the finish line. However, of the eight bills she was the primary author on, at least one Democrat was listed on six.

In debates and interviews, Spartz has criticized Congress for not being more willing to collaborate to work toward solutions, and has boasted about what she saw as a good relationship between Republicans and Democrats in the Statehouse.

Of course, Kinsella pointed out that any freshman lawmaker is going to struggle to get legislation passed in Congress. In the 115th Congress, only 3% of bills even made it across the finish line.

By the time either gets much seniority enabling them to pass more bills, which party is in the majority could have already changed.

"Regardless who gets elected, getting a piece of legislation through Congress is extremely difficult and pretty rare," Kinsella said. "If Democrats, get control of the Senate, keep control of the House and win control of the White House, there's a better chance for Democrats. I think a Republican would have almost a zero chance of getting anything through."

Perhaps what matters more, he said, is how they would vote.

Spartz would likely side with Trump if he stays in office

As of Oct. 19, FiveThirtyEight gave Trump a 12% chance of winning in November, but that does not mean he should be counted out. So come January, he could be in the White House still, said Andy Downs, a political scientist at Purdue University Fort Wayne.

"Although the polls are very consistent," Downs said, "the nature of the electorate itself, who is going to show up, is a little more difficult to accurately predict this year than in other years."

Plus, with a paper ballot voters are more likely to mess up, causing their ballots to be tossed out, Downs said.

During the general election, both Hale and Spartz have avoided talking about Trump, whether it's intentional or not.

But during the primary that wasn't the case. Spartz, along with other Republicans, routinely name-dropped Trump. In one primary ad, a narrator said Spartz "will stand with Trump to bring jobs back from Communist China."

This summer, she was named Donald Trump Jr.’s MAGA Candidate of the Week.

During a primary debate she also praised Trump's handling of coronavirus and in answers to questions from IndyStar this September said he was "right" to confront China on trade with tariffs and commended his tax code changes.

Hale, on the other hand, criticized both. She praised Democratic Presidential candidate Joe Biden after earning his endorsement last month, but has not name dropped him often.

This might be Indiana Democrats' best shot at flipping a seat

Hoosier political scientists say Indiana's 5th Congressional District is one of the Hoosier Democrats' best chances of flipping a seat.

"From what I’ve seen I think this is Democrats' best shot for doing anything in Indiana at the federal level," Kinsella said, "maybe even at the state."

And at Indiana's Congressional level, only the 5th is making the national lists of most likely to flip. No U.S. Senate seats are in play this year.

In a state where Democrat victories have been few and far between of late, if Hale wins in the 5th it could be a moral booster, even if it flips back in two years after Republicans redistrict the state, assuming they keep the majority in the Statehouse.

"If there's a win that’s good all over (for the Democrats)," Downs said. "The state will of course use Christina Hale to try to raise support, probably try to convince her to help with candidate recruitment and basically building the party."

In the 5th District, local Democratic leaders will be able to point to a win or even a close race when trying to recruit for future elections.