Also take a look at which YAIAA wrestling teams are in position for the postseason, and who else is on 100 wins.

South Western’s Chase Mowery became the fourth YAIAA wrestler to reach 100 career wins this season after he picked up five wins at the Waynesboro duals this past weekend.

Mowery is the 11th wrestler in South Western history to reach the 100 win mark.

Here is a look around the YAIAA mats.

With one week remaining in the regular season, several YAIAA teams find themselves either in the District 3 team tournament field, or on the bubble. Here's a look at who is in and who is in contention, along with their current district rankings.

Spring Grove, Bermudian Springs, Gettysburg and Dallastown should all make the tournament with their current resumes.

Delone Catholic could be in trouble if it loses to Bermudian Springs on Thursday, but the Squires will also be able to improve their rating with matches next week against Camp Hill and Eastern York. South Western has three matches to go against Central York, Susquehannock and Dover, giving the Mustangs a chance to strengthen their hold on a district berth.

Among the bubble teams, Kennard-Dale can improve its rating with a victory Saturday when the Rams head to Solanco. New Oxford has one match left, against Spring Grove on Thursday to improve its chances. 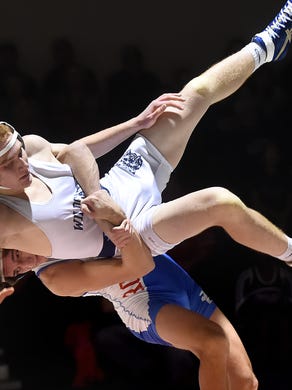 Dallastown's Drake Pew cries out due to knee pain as Spring Grove's Jared Barley takes him down in the 182 lb. class during the Rockets' 40-24 victory on Tuesday, Jan. 17, 2017. Jason Plotkin, York Daily Record
Fullscreen

Wrestlers to reach 100 wins so far this year:

Dallastown duals: Dallastown went 2-1 in the Wildcats' tournament-style duals, falling to Methacton, 35-30 in the finals. Kennard-Dale finished seventh at the duals, beating Hatboro-Horsham, 39-38 in the seventh-place match. Several wrestlers went 3-0 on the day for the Wildcats, led by Bryce Shields who recorded two falls and a tech fall. Andrew Barnett went 3-0 for the Rams.