Chatterton, Rohrbaugh battle back for bronze

Chatterton, Rohrbaugh battle back for bronze

Chandler Olson of Shippensburg gets up off the mat after suffering a pin by Altoona's Cole Manley in the 126-pound third-place bout at the PIAA Championships on Saturday. Chris Dunn, York Daily Record
Fullscreen

Hanover's Caleb Garland is comforted by his coach during his match against Line Mountain's Brian Earlston during the second day of PIAA AA wrestling championships at the Giant Center on Friday, March 11, 2016. Jeremy Long, GameTimePA.com
Fullscreen 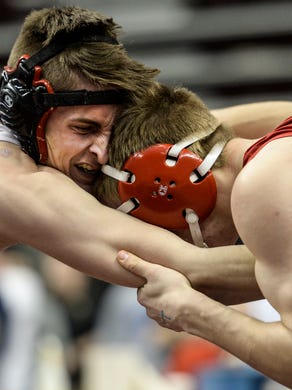 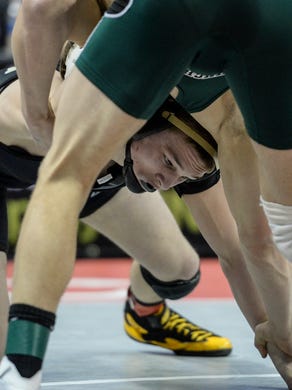 Northern Lebanon's Luke Funck reacts to his victory over Milton's Gage Heller during the quarterfinals of the PIAA AA wrestling championships at the Giant Center on Friday. Jeremy Long, GameTimePA.com
Fullscreen 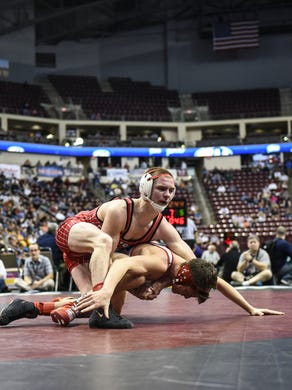 Shippensburg's Cameron Tinner is being taken down by Nathan Barcaskey of Moon during the PIAA Wrestling Championships at Giant Center in Hershey, Pa. on Thursday, March 10, 2016. Tinner defeats Barcaskey 9-7. Noelle Haro-Gomez/GameTImePA.com
Fullscreen

Chambersburg's Garrett Kyner pins Abraham Charles of Pennwood during a preliminary match at the PIAA Wrestling Championships inside Giant Center in Hershey, Pa. on Thursday, March 10, 2016. Kyner pinned Charles at 1:07 with a headlock. Noelle Haro-Gomez/GameTImePA.com
Fullscreen 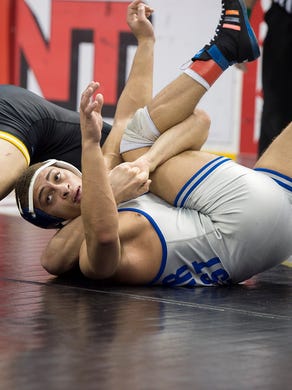 Chambersburg's Garrett Kyner tries to break away from a pin by Luke Pletcher of Latrobe during a match at the PIAA Wrestling Championships inside Giant Center in Hershey, Pa. on Thursday, March 10, 2016. Pletcher defeated Kyner by fall at 3:24. Noelle Haro-Gomez/GameTImePA.com
Fullscreen

Chambersburg's Aaron Rump is fighting off a take down shot by Cary Palmer of Council Rock South during a preliminary round match at PIAA Wrestling Championships inside Giant Center in Hershey, Pa. on Thursday, March 10, 2016. Palmer won 2-0. Noelle Haro-Gomez/GameTImePA.com
Fullscreen 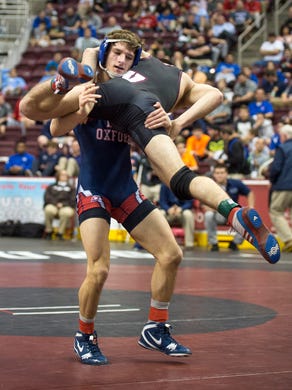 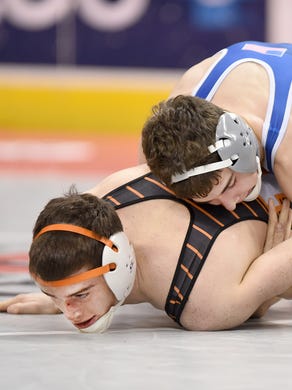 Northern Lebanon's Quinn Blatt defeated Brandyn Beaver of Chestnut Ridge in the preliminary round of the 170-pound bracket on Thursday during the first day of the PIAA Class AA Wrestling Championships. Michael K. Dakota, GametimePA
Fullscreen 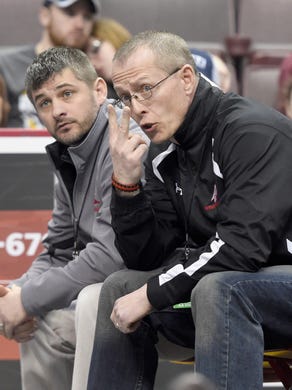 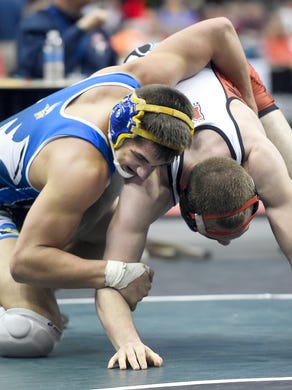 Luke Funck of Northern Lebanon is the only Lebanon County wrestler still alive for a state title after advancing to the 182-pound quarterfinals on Thursday at Giant Center. Michael K. Dakota, GametimePA
Fullscreen

Hershey - Dylan Chatterton accomplished a feat no wrestler has ever achieved at the PIAA wrestling championships.

The Central York senior, one of two York County wrestlers to place third in the Class AAA state tournament on Saturday, became the first wrestler to ever lose a preliminary-round match at states and then win out. The preliminary round was added to the tournament last year when the number of wrestlers qualifying for the state tournament was increased from 16 to 20 in each weight class.

“It’s all a blur now," Chatterton said. "I forget half the kids I even wrestled, it felt like so many. I just told myself, ‘one match at a time.’ First I made a goal to get on the podium, and then just kept trying to work my way up the podium. I’m glad I was able to come back strong and end my season on a good note.” Chatterton capped the streak, and his Central career, by beating Council Rock South's Lucas Marcoccio, 4-2, in the bronze-medal match. He scored the first points of the match on a first-period takedown, then he added a reversal with 15 seconds left in the second period.

Like most of his six victories, his final victory came amid several stoppages to treat a bloody nose. He continued to deal with the effects of a broken nose sustained during the District 3 tournament two weeks ago, and he also battled through a burst bursa sac in his knee.

“This is definitely the highest moment of my wrestling career," Chatterton said. "Being able to battle back was definitely huge. I beat some really good kids on the way back. I pretty much went through the whole bracket except the top two.”

Spring Grove sophomore Dalton Rohrbaugh also earned a third-place medal at the Giant Center, but he took a more conventional route to his place on the podium.

The 106-pounder reached the semifinals, where he lost, 7-4, to defending state champion Tyson Klump — who later repeated as champion — Saturday morning. But Rohrbaugh bounced back a couple hours later with an 11-1 defeat of Bethlehem Catholic's Zach Glenn in the consolation semifinals.

He followed that dominant performance up by beating Spring Ford's Brandon Meredith 10-3 in the bronze-medal match.

The win etched Rohrbaugh's name into the Spring Grove record books as the first sophomore to win a state medal.

“I can tell you honestly, from the end of last season I think he took two days off and started focusing on this season. Maybe he’ll take three days off this year, but I wouldn’t be surprised to see him rolling around Tuesday night. That just shows if you put the hard work and time in it pays off.”

While Rohrbaugh will have another shot at a state title next season, Chatterton's high school career ended with his bronze medal. He also won a fifth-place medal as a 106-pound freshman in 2013, and he will continue his wrestling career at Shorter University in Rome, Georgia, for coach Josh Henson, a 1997 state champion from Hanover.

“He was the biggest contributor to our success," first-year Central York coach Seth Beitz said of Chatterton's season. "He was such a great leader, he really, really took care of our freshmen. A lot of seniors will maybe blow them off and just focus on themselves, but he didn’t do that.”

Northern York's Jonathan Ross, who won a District 3 championship two weeks ago, earned a fifth-place medal for the second year in a row. The final match of his career culminated in his 130th career victory, and he plans to wrestle at Division I Lock Haven next year.

“I’m disappointed. I wanted to be in the state finals," Ross said. “I’m gonna take a long break. I pulled a nerve in my neck at the end of January and my (left) arm is about 20 percent as strong as it was before.”

Further down the podium stood South Western's Gage Thomas, who placed eighth in his first trip to states.

“It wasn’t quite what I wanted," Thomas said. "But I’m sure it will sink in that I did get a medal and did get on the podium.”

“Gage Thomas was the leader, he was one of the captains of the team and he would always step up when I needed him to," South Western coach Nate Murren said. "On and off the mat, Gage represents what South Western wrestling is. He’s a hard-nosed, go-get-’em, emotional wrestler and that’s what I always look for."