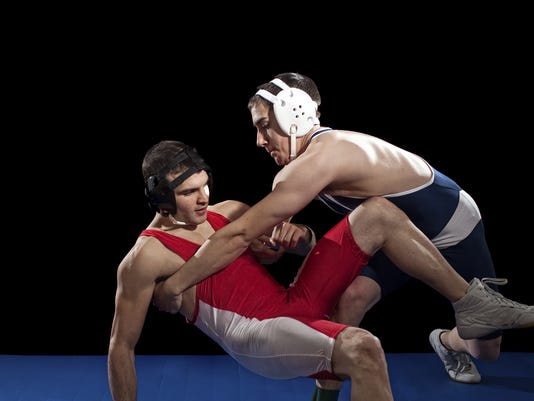 Mackley and Fleshman will face off in a 170-pound semifinal Saturday. The winner gets either Quinn Blatt, the District 3 champ from Northern Lebanon, or Camp Hill's Tita Nyambi, as the four District 3 wrestlers dominated the 170-pound field.

Four other YAIAA wrestlers advanced to the semifinals, which begin at 11 a.m. Saturday at Wilson.

Bermudian's Austin Clabaugh was the first local wrestler to punch his ticket to the semifinals after a tech fall in the first round and a fall in 2:36 in the quarters. He'll face District 11 champ Jack Hill of Saucon Valley in the semifinals in a battle of Top 5 wrestlers in the state, as ranked by papowerwrestling.com. Clabaugh enters the match ranked fourth and Hill fifth. Hill defeated Boiling Springs' Jalin Hankerson in the quarters.

The last semifinalist and current PIAA qualifier is Delone's Brady Repasky who qualified at 182 pounds after beating YAIAA foe Colton Sentz of Biglerville, 3-2, in the quarterfinals. The victory followed up a pin in 3:06 against Panther Valley's Dylan Moyer. Repasky will take on the District 3 champ, Northern Lebanon's Luke Funck, in the semifinals.

Hanover's Caleb Garland is one of several YAIAA wrestlers who need at least two wins in Saturday's wrestlebacks to qualify for the state tournament. Garland, the District 3 champ at 126, picked up a fall in the first round before dropping a 4-2 quarterfinal decision to Palisade's Nathan Haubert.