DUNCANNON - Of the four wrestlers who entered the District 3 Class AA Section I tournament as defending champions, three left as repeat champions. All three of those winners hail from the YAIAA.

Bermudian Springs heavyweight Brady Linebaugh, Hanover 126-pounder Caleb Garland and Biglerville 152-pounder Nate Newberry, who are all seniors, left Susquenita High School with gold medals draped around their necks for the second year in a row.

“You wrestle a lot of the same people," Linebaugh said of trying to defend a title. "I already know most of how they wrestle. Perkins and I have been at it four times in my high school career. I know they want to beat me, but I just have to keep working the way I have the last four years, and I know if I do I can keep winning.”

All three wrestlers went to the PIAA championships last season. Only Newberry, who committed to wrestle at Bloomsburg earlier this week, ended up on the podium in Hershey, taking seventh at 145 pounds.

“I feel more pressure to get back to states and do better than what I did last year,” Garland said of repeating as sectional champion. “I just get in the room, work hard and don’t really look back too much on the past, just keep pushing forward.”

Unlike last year, when all three entered districts as first-time sectional champions, these seniors certainly won't sneak up on anyone at next week's District 3 championships.

“Last year, I had to prove myself," Newberry said. "This year, I continue to want to prove myself and extend my lead this time and go in with a clear mind and just go after it.”

The only defending champion that couldn't defend his title at Susquenita was Boiling Springs junior 120-pounder Jalin Hankerson, who lost to Austin Clabaugh for the third time this season.

Hankerson, who placed sixth at states last year, and Clabaugh, a sectional champion at 106 pounds in 2014, have faced each other in three dramatic matches in the last three weeks. All three times, Clabaugh found a way to win. The Bermudian Springs junior won 7-4 at a regular-season dual meet in late January, then pinned Hankerson while trailing 4-0 in the final match of a district tournament dual meet. Clabaugh found himself behind again this time, trailing 6-3 early in the third period before taking down Hankerson to cut the lead to one point. After working to turn his opponent for close to a minute, Clabaugh finally turned Hankerson for several seconds before the referee slammed his hand on the mat for a pin with six seconds left.

“As I got the turn, I saw 11 (seconds on the clock)," Clabaugh said. "There was no way I was letting go of him at that point.

I would’ve liked to beat him the way I did the first time when I controlled the match and got takedowns throughout the whole thing. But knowing that once I get on top, I can really control him the way I have, I know I can control the match and figure out a way to get the win from there.”

Clabaugh wore his "100 win club" shirt after the victory, which coaches gave to him after he eclipsed the milestone with a pin in the tournament's quarterfinals. His goal is to top 150 wins by the end of his senior year.

“It was a long two weeks having 99 after team districts and not getting the chance to wrestle again at all," Clabaugh said. "But it was something to look forward to knowing as soon as I came out at sectionals I’d be able to get the 100th.”

“Being actually 106 this year, I felt good," West said. "I trained over the summer and just knowing that I was ranked No. 1 in the section gave me a lot of confidence.”

With only nine wrestlers, Littlestown's practice room doesn't have a whole lot of variety.

As the two heaviest Thunderbolts, 182-pounder Connor Geiman and 220-pounder Matt Guilday spend much of their practice time drilling with each other. But that time clearly paid off, as Geiman beat Boiling Springs' Austin Taylor 5-0 and Guilday pinned Delone Catholic's Damian Rodriguez in just more than a minute in their respective sectional finals.

“Matt’s more of a strength, I’ll-throw-you-around wrestler, he’s not much of a leg-rider," Geiman said. "It’s great because I’ll face stockier kids who are stronger, and I’m able to work with them better. When I wrestle him, I’m a quicker guy that rides legs and goes all over the place and that helps him.”

Added Guilday: “We come into the practice room like it’s match time, we wrestle each go like it’s a match. We just put ourselves in those scenarios so when we come to them, we’re ready.”

“Our numbers might be small, but our numbers are good," Guilday said. "Our guys are gonna fight to the end.” 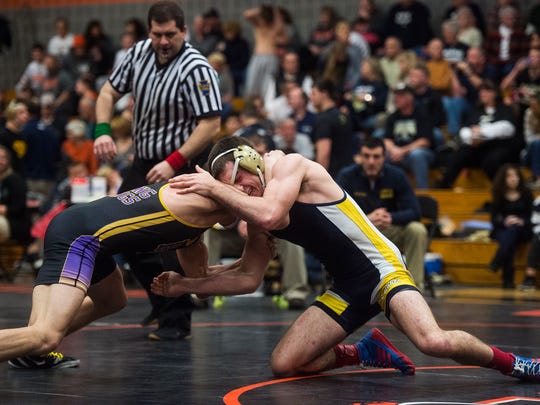 Dakota Mackley can say something neither of his two older brothers can say: he's a sectional champion.

The Eastern York 170-pounder, who comes from a family three-generations deep into high school wrestling, beat Bermudian Springs' Noah Fleshman in the final to secure the gold medal and a future "sectional champion" plaque that will go up inside his school.

Mackley trailed Fleshman, 2-1, before running an arm bar and locking Fleshman's other arm to force his legs into the air and his shoulder blades down to the mat long enough for the referee to call a pin.

Mackley qualified for the PIAA championships last year as a 152-pounder, and still weighs about six pounds lighter than his 170-pound opponents as he hopes to get back to Hershey for a second-straight season.

“Hopefully I’ll gain a little bit more weight by states," he said. "I’ll be working out twice a day.”