The most exciting match of the night ended with Brendan Quinn on top, and secured the Squires' win against Littlestown.

Delone's Brendan Quinn wins a match during a dual meet in December. At the Canner Duals, the Squires lost to J.P. McCaskey when the Red Tornado broke a tie by sending out two female wrestlers to earn forfeits. The Diocese of Harrisburg doesn't allow males to wrestle females. File, GameTimePA.com
Fullscreen

The Littlestown Bolts wrestling team warm up prior to their home match against the Delone Spires on December 16th, 2015. Delone won the match 48-31. Harrison Jones, for GameTimePA.com
Fullscreen

Littlestown's Corbin Brown attempts to get backpoints during a match at Littlestown High School on December 16th, 2015. Delone won the match 48-31. Harrison Jones, for GameTimePA.com
Fullscreen 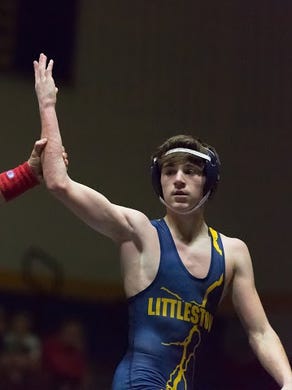 Littlestown's Corbin Brown is declared the winner after a December bout. Despite Littlestown's losing record, the Thunderbolts have a talented group. File, GameTimePA.com
Fullscreen 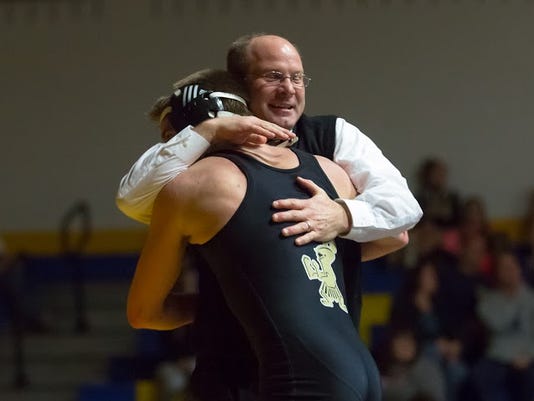 The first match of Brendan Quinn's varsity dual meet career couldn't have gone much better than it did on Wednesday night.

The Delone Catholic 152-pound junior, who transferred to the school last summer after three years of wrestling in the South Western School District, pinned Littlestown freshman Carl Harris in what proved to be the decisive match of the Squires' 48-31 win.

In what fittingly turned out to be the most action-packed match of the dual, Quinn and Harris spent close to three minutes going back and forth trading places on top and bottom, nearly pinning each other several times. The noise in the Littlestown gymnasium, split almost evenly between dozens of Squires and Thunderbolts fans, grew with each toss and turn, building like lava in a volcano ready to erupt.

“I make it exciting," Quinn said with a smile. "It’s just the way I learned how to wrestle. I always wrestled better kids, and I’d have to find a way to score. I could never really do it by the books.”

The noise volcano erupted halfway through the second period when Quinn locked Harris up in a cradle, and the referee slammed his arm on the mat to signal a pin. The sound level reached its highest point of the night as all the wrestlers on Delone Catholic's bench leaped out of their seats in celebration and coach Frank Sneeringer, red in the face, jumped up and down and pumped his fist several times.

The dual meet lead had changed hands after each of the previous two matches, and Quinn's win put Delone Catholic ahead 36-27 with three bouts remaining. With at least one more win guaranteed for the Squires from a forfeit at 170 pounds, Quinn's pin assured that Delone Catholic would move to 1-0 on the season.

“That was the match," Sneeringer said of Quinn's pin. "Once that happened, we knew how the rest would fall out. Brenden wrestled a great match, gave us what we needed.”

Bryce Perkins (heavyweight), Cody Pfaff (145) and Brian Shermeyer (160) also scored pins for Delone Catholic, and the Squires benefited from four forfeits at Littlestown's empty weight classes while only giving away one forfeit for the same reason.

“It’s tough to win when you’re giving away four forfeits," Littlestown coach Kerry Ferguson said. "I told them at the end of the match, I thought we wrestled well. I knew the 152-pound match was gonna be a tight one, our guy ended up getting caught on his back.

"It is what it is at this point in the season. I told (Harris), ‘Hey, it’s the beginning of the year, it’s just one match. Just get over it and build from it.’"

For the Squires, who went 5-1 in YAIAA Division III last year but lost several wrestlers to graduation, the win proved they're still a force to be reckoned with in the division.

“They performed, and the kids I needed to really perform got the pins like I needed,” Sneeringer said. "It's a start."