Red Lion and Spring Grove wrestlers are headed to a tournament in Tennessee this weekend to start their seasons.

South Western, Spring Grove expected to be top contenders for Division I crown

Spring Grove wrestling coach Tony Miller made a bit of an understatement when discussing his team’s trip to Tennessee this weekend.

“We were looking for something not in the area,” said the veteran coach. “It’s always more exciting seeing different teams.”

The Rockets made an eight-hour drive to Kingsport, Tennessee, for the U.S. Air Force Indian Classic, which features teams from eight different states.

However, Miller’s squad will see at least one set of familiar faces as Red Lion is also making the trip.

Lions coach Chris Schell agrees with Miller regarding the appeal of the 35-team event.

“It’s nice to get away from Pennsylvania sometimes,” he said. “The kids won’t know who they are wrestling, so they can just go out and wrestle their best.”

What they will know is some of the teams participating in Kingsport are among the best in their respective states. Five of the squads won team state titles last season.

The growth of the sport in the Southeast has been steady and, while the depth of states like North Carolina or Virginia, doesn’t compare to Pennsylvania, outstanding individual wrestlers can be found in the region.

Archer High School from Georgia is probably the strongest team in the field. The Tigers are winners of 89 consecutive dual matches and are currently ranked 13th in Intermat Wrestling’s Fab 50 high school team rankings.

The Lawrenceville, Georgia, team has four nationally-ranked individuals, led by the Bullard brothers, Thomas (No. 2 at 160) and Daniel (No. 3 at 170). Both will continue their careers next year at North Carolina State University.

The tournament will run on nine mats, making it even larger than the PIAA championships, which uses six mats.

“This will be new for most of our kids," Miller said. "Jake Meyer and Dalton (Rohrbaugh) went to Super 32 which would be similar," he added, mentioning the premier preseason tournament held in North Carolina. “For the other kids, this will be a whole different experience.”

Schell believes the competition is only half the reason why the trip is worth the trouble.

“This is a great way to build team chemistry,” he said. “Once we get down there, we’re going to practice and then go back to the hotel for a movie night.”

Another season starts, but the contenders remain the same.

Division I: South Western and Spring Grove look to battle it out for the top spot while Red Lion and New Oxford are hoping to be factors along the way.

South Western returns the best one-two lightweight punch in the league in Derek Wilson (120) and Owen Wherley (126). The seniors each won more than 35 matches last season, earning spots in the PIAA championships. They will be joined in the lineup by four-year starter Gage Thomas, a District 3 qualifier last season at 152.

However, the Mustangs will be short one outstanding wrestler. Seth Janney, who reached the state final at 220 last season as a sophomore, has transferred to Malvern Prep, a private Catholic boys school ranked 26th in the nation.

The junior, who went 41-3 and won the District 3 title last season, is ranked 10th among 220-pounders in the country. That’s a lot of team points that need to be picked up somewhere else in the Mustang lineup.

Meanwhile, Marcus Kehr (160) and Dalton Rohrbaugh (106) are a pair of PIAA qualifiers back for the Rockets. Rohrbaugh was the first freshman in program history to qualify for the state tournament, ending up with 32 wins in his first varsity campaign.

Division II: Kennard-Dale returns four District 3 qualifiers to lead the Rams’ effort to repeat atop the division. Senior Michael Bracey finished last season 28-3 at 126 while teammate junior Andrew Barnett missed out on a state tournament berth by one match. Sophomore Justin Miller (106) and junior Austin McNamee (145) will be counted on for team points.

A pair of senior big men — Ryan Narber (160) and Jake Cicchoski (195) — will by key to West York’s challenge of the Rams’ divisional supremecy. A 30+ match winner last season, Narber reached the District 3 semifinals before falling just short of a PIAA ticket.

Biglerville, the Eagles’ next-door-neighbor rival, will again present the biggest threat to claim the crown. The Canner will need big performances from its tough middleweight duo of Scott Cooper (138) and Nate Newberry (145).

Cooper missed most of the season with a broken foot suffered in football, but Newberry had a breakout season. The senior claimed District 3 and Southeast Regional championships on his way to Hershey where he finished seventh in the PIAA championships. 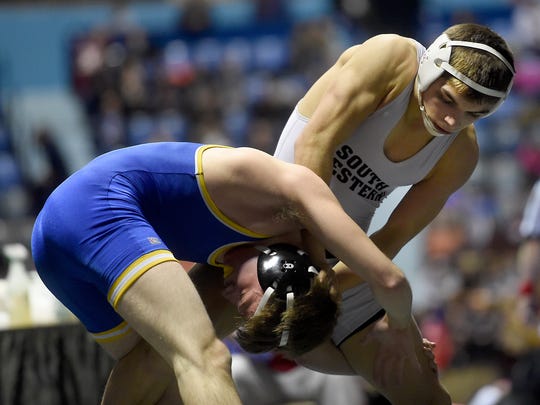 Dylan Chatterton of Central York returns for his fourth year in the Panthers lineup. The senior reached the Class AAA state quarterfinals at 138 last season before running into the eventual state champion, ending his season with a 33-3 mark.

New Oxford lightweight Zurich Storm (113) earned his first spot in the state tournament with a third-place finish in a 36-6 sophomore season.

In Class AA, Caleb Garland (120) of Hanover and Dakota Mackley (152) of Eastern York are seeking a return trip to the state tournament. 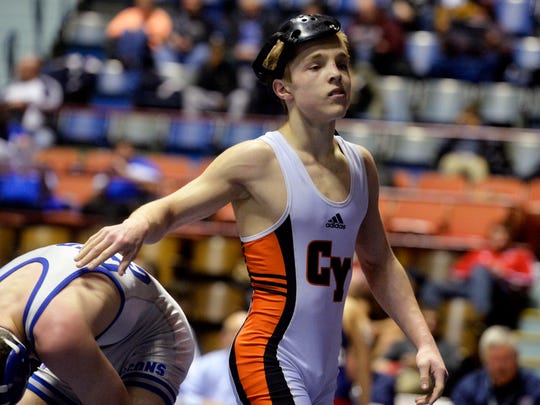