Can William Penn sustain the addition of 7 sports?

The sports landscape at William Penn High School is beginning to change, as the school looks to add sports.

Can William Penn sustain the addition of 7 sports?

The Bearcats are hoping to bring back programs just a few years after dropping them. 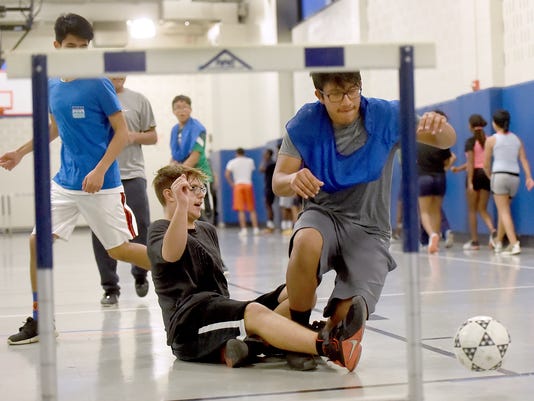 William Penn high school soccer player Leighton Mercado, slide tackles teammate Pedro Giron during a recent practice inside the school. The duo are framed by hurdles placed together as makeshift goals, while the track team shares the space in the upper area of the gym at rear.(Photo: Jason Plotkin, York Daily Record)

The sports landscape at William Penn High School could be on the verge of a major overhaul.

Five sports were reinstated this fall and several more could be coming in the near future, school athletic director Ron Coursey said.

Boys' and girls' cross country, boys’ soccer and girls’ soccer, and competitive cheer all returned during the fall academic semester on either a club or junior varsity level. Coursey said the school is aiming to add softball and baseball this spring in a similar capacity.

Talks of a full-fledged return to varsity athletics for the seven sports is preliminary, district spokeswoman Erin James said. The school board must approve of such a move for each sport, James said. She added that each sport has a separate budget that must be "sustainable and funded."

A look at how much it costs other area schools to run those sports gives you an idea of William Penn's challenge.

During the 2014-15 academic year, Spring Grove Area High School spent $10,432.83 to run its junior varsity baseball program, according to the 2014-15 Athletic Opportunities Report, which is filed every year by Pennsylvania public high schools to the state's Department of Education. The Rockets' baseball program in its entirety — all expenses surrounding their varsity and junior varsity programs — cost nearly $31,000 that season.

Money spent on specific sports programs varies depending on different factors on a year-to-year basis. Such circumstances can lead to fluctuations in how much a program spends in a given year.

"It's dependent on a lot of different things," said Eastern York Athletic Director Don Knaub. "Your postseason success, your transportation costs, if you had new uniforms. Every school and every year is going to be different."

William Penn's approach to generating funds will be two-fold, Coursey said, with the school board allocating money to the programs and William Penn reaching out to the community for assistance. York city's 2016-17 academic budget is $128 million.

"Because we are a district currently in a recovery plan, part of my job has been to reach out to community members," Coursey said. "Local businesses, local nonprofits and see who is willing to partner with us to help. Whether it be financially or through volunteer efforts or anything that's going to help us rebuild these programs." 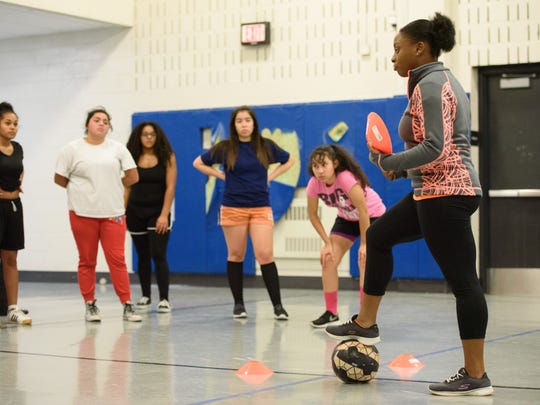 Coach Alexis Lindo, right, gives directions for a passing drill to girls during a workout for the William Penn High School soccer team on Wednesday, Dec. 14, 2016. The school is planning to reintroduce several sports, including boys and girls soccer. (Photo: Jeff Lautenberger/For GameTimePA.com)

Coursey said the "poster child" for community involvement with William Penn athletics is the York Revolution, who offered PeoplesBank Park as an occasional home field for Bearcats baseball.

Revs president Eric Menzer wrote in an email that William Penn could use the field on an “as-available” basis if the school “can get (the baseball program) up and running.”

Coursey said the Bearcats would have access to the field and dugouts on gameday. He added that Menzer will grant the team access to batting cages and pitching mounds underneath PeoplesBank Park if those facilities aren’t in use by the minor league team.

"He's a baseball guy,” Coursey said of Menzer. "He wants to see baseball back at York High and York city."

"We've prepared kids to play baseball. But then they have no outlets outside of  American Legion," Woods said.

He then asked rhetorically, from a player's perspective: "'Why am I putting everything into playing this when I can't showcase myself past the age of 15?'"

For the soccer programs, both coaches — Soji Otuyelu for the boys and Alexis Lindo for the girls — are volunteer coaches from the community.

Soji, who lives in the York Suburban school district, said he's been working with the boys' program since May. He said the need for quality volunteer coaches are vital for a startup program, and that he wants to help the kids cultivate a love for soccer. 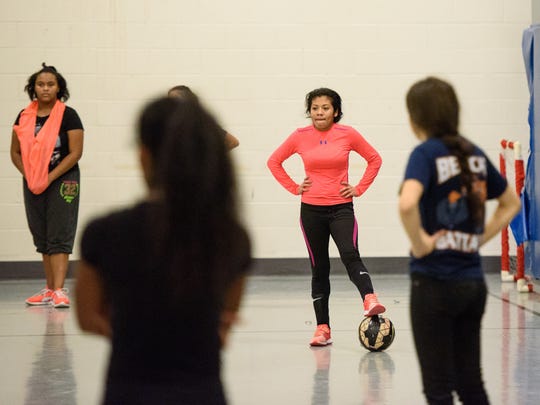 Junior Michelle Molina rests her foot on a ball during a break in a team passing exercise at William Penn High School on Dec. 14. Girls' soccer was re-introduced to the school this fall on the junior varsity level. (Photo: Jeff Lautenberger/For GameTimePA.com)

All the aforementioned programs were part of Bearcats athletics. But the school dropped them over the past 10 years as it cut its budget.

Coursey said all the programs will be reintroduced initially as club or junior varsity sports so the school can gauge interest, talent level, and teach athletes the fundamentals of the game.

There were 45 players in the two soccer programs this past fall — 23 boys and 18 girls — according to Coursey. There were five cross country runners total and 17 female student-athletes in the competitive cheer program, Coursey said.

Coursey said that during a recent softball meeting, 45 prospective players attended. He added that William Penn softball would play its home games at Hannah Penn Middle School in York city.

While boys' and girls' soccer would play at Small Field, the cross country team would call portions of the Heritage Rail Trail Park its home course.

"The kids are hungry for it," Coursey said.

Three programs the school considered resurrecting but didn't receive enough interest for were wrestling and boys' and girls' tennis. Instead, co-ops are in place with other schools for William Penn student-athletes interested in participating yet can't at their own school: wrestling with York County Tech, tennis with York Country Day.

Victoria Jean-Baptiste, a member of the competitive cheer team at William Penn, said she's never been part of a competitive sports team, making this year a new experience for her.

"I was hesitant at first," she said. "But now that you see it all coming together...It’s just an amazing thing to do. It’s a good place for you to meet new people, make friends.”

How do they stack up?

Total costs for these programs include travel, uniforms, supplies and equipment, facilities, coaches compensation and other expenditures.

Below is a breakdown of the annual expenditures from each school for the nine sports William Penn is looking to add. The information was compiled from the 2014-15 School Year Athletic Opportunities Report, which is an annual report that schools submit to the department of education with participation numbers and athletic program costs.