The GameTimePA.com YAIAA baseball all-stars are led by Player of the Year Cash Gladfelter of West York. 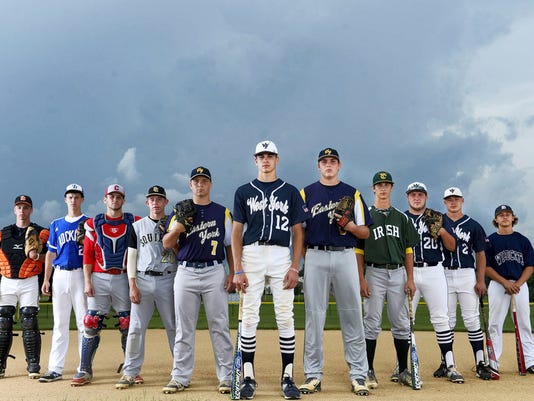 Player of the Year

Cash Gladfelter, West York, sr.: A threat on the mound and at the plate, the senior spearheaded the Bulldogs attack. Gladfelter was 4-3 and struck out 42 batters in 27 innings. He finished the season with a 1.56 ERA. At the plate, he hit .381 with 16 runs batted in. He scored 19 runs and hit six doubles and a triple. In the YAIAA tournament title game, Gladfelter provided the game-winning walk-off bunt that secured West York's third league championship in four years.

Vote for GameTimePA.com Spring Athlete of the Year

Matt Brooks, Spring Grove, jr.: The junior led the Rockets to the District 3 Class AAA finals behind an 11-strikeout performance against Twin Valley. Brooks, a two time all-star, was a workhorse for the Division I champions, pitching 18 of 29 innings of their district run.

Tye Golden, Dallastown, so.: A two-time all-star, Golden hit .365 for the season. He hit a pair of two-run homers in an April victory against Northeastern. Golden finished with 27 hits and 21 RBIs. He also scored 17 runs for the Wildcats.

Brett Kinneman, West York, sr.: The N.C. State recruit finished his senior season with three home runs and 26 runs scored. He finished with a perfect fielding percentage and stole 19 bases. Kinneman was also 5-0 on the mound with a 2.33 ERA and 42 strikeouts.

Brandon Knarr, Eastern York, so.: The Golden Knights pitcher finished the season with a 2.29 ERA and an astounding 94 strikeouts. The sophomore struck out 18 in a YAIAA tournament semifinal victory against Delone Catholic for the league tournament finalists.

Jake Krevetski, York Catholic, sr.: The senior pitcher went 5-1 for the Irish with 41 strikeouts. He also hit .372 with 15 RBIs. Krevetski scored 15 runs to lead the Irish to the District 3 Class AA semifinals.

Austin Kuntz, Delone Catholic, jr.: Kuntz led the Division IV champions with a .327 average. He also recorded 19 steals. One of his standout games was against York County Tech, when he hit a triple and scored three runs.

Thomas Merkle, York Suburban, sr.: Merkle led the Trojans with a .458 average and a .487 on-base percentage. The Trojans leadoff hitter was perfect in that role, striking out just three times in 72 at-bats. On the mound, he recorded 32 strikeouts in 33 innings.

Keegan Romanoff, New Oxford, sr.: The Colonials catcher set the school's single-season hits record. Romanoff had 35 hits in 20 games and batted .522. The previous Colonials record was 34 hits over 23 games. The senior leadoff hitter is off to Alderson Broaddus University in Philippi, West Virginia, in the fall to play football.

Colby Shimmel, Eastern York, jr.: The junior right-hander was 5-2 with one save for the Golden Knights. Shimmel finished with 44 strikeouts and a stellar 1.11 ERA. He also hit .484 for the season. His two-run single provided the lone runs of a win against Delone Catholic in a YAIAA tournament semifinal.

Logan Stover, West York, sr.: The Bulldogs senior hit .350 for the Division II champions. A two-time baseball all-star who also earned a spot on the GameTimePA.com football all-star team, Stover recorded 21 hits, including four doubles. He finished with 24 RBIs and a .444 on-base percentage.

Coach of the Year

Kevin Stiffler, Spring Grove: The longtime assistant had quite the first year as the Rockets' head man. Spring Grove went 12-3 to win Division I. Working with a young team, Stiffler guided the Rockets to the program's first appearance in the District 3 Class AAA championship game. Spring Grove finished 18-8 with only two varsity players back from the 2014 season.