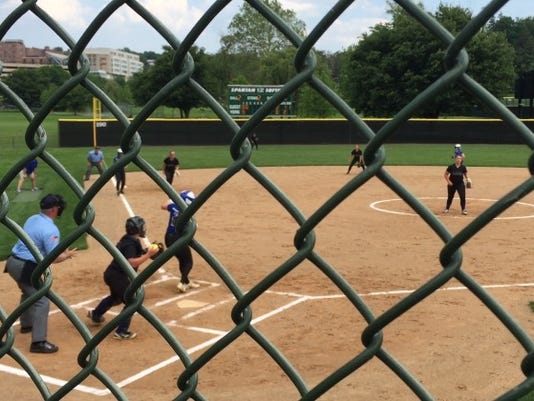 Kennard-Dale fell to the Garden Spot in the second round the District 3 Class AAA playoffs.(Photo: Christian Arnold)

When the winning run crossed the plate Thursday, Garden Spot second baseman Camryn Focht leaped into the arms of a teammate in celebration.

Focht had just had what she called a “life-changing” hit in the bottom of the ninth inning to give Garden Spot the 1-0 win against Kennard-Dale, sending her team to the semifinals of the District 3 Class AAA softball tournament.

Focht still had a smile on her face as she walked off the field toward the team bus.

“For me, I just had my timing down, and I was just ready for it,” she said about the winning hit. “I knew I could do this and I wouldn’t have been able to do it without (my teammates). They were giving me so much encouragement. It was great.”

Garden Spot wins it 1-0 off a base hit up the gut to drive in winning run in the bottom of the 9th. pic.twitter.com/PFHYJ8uD3d

Up to that point, Thursday’s second-round matchup been a defensive battle. Rams starter Alexis Valentine and Spartans pitcher Taylor Martin threw complete games and battled through some tough spots early in the game.

Valentine worked her way out of a jam in the bottom of the second with runners on the corners with two outs. The Kennard-Dale pitcher struck out the next batter, Focht, to end the inning. She found herself in a similar spot in the third, but she forced Garden Spot shortstop Sydney Nicholas to fly out.

“I love having her in there,” Rams third baseman Kayla Beach said. “I know that when she goes in there she puts in her heart. Her arm may be hurting, but … we know that when we go to a game she’s going to give everything she’s got.”

Not to be outdone, @KDHS_Athletics Alexis Valentine works out of a jam in the second pic.twitter.com/YYWwBnyXkA

Martin kept the Rams at bay while she was on the mound. In the fifth inning, Kennard-Dale had two runners on with only one out, threatening to finally snap the scoreless tie. However, Martin struck out center fielder Crystal Mullins and forced Megan Gereny to fly out.

After the top of the sixth, Martin retired the next nine Kennard-Dale batters she faced. Valentine sat the next 11 Garden Spot batters she saw before the Spartans cracked three straight hits in the bottom of the ninth.

“I would definitely say, because they were the 14th seed and they beat the two seed, it was clear that they knew how to bring game,” Martin said of the Rams. “Defensively, I’d say both sides it was one, two, three. One, two, three, so both sides' defense was so strong.”

The loss was a disappointing one for Valentine and the rest of the Rams, but she said she was proud of what her team accomplished this year.

“Towards the end of the season I had so much confidence in our team,” Valentine said. “It’s just been really amazing for my senior year.”