Two weeks into the YAIAA softball season, we've seen some surprises, some expectations met and some scores that made our jaws drop.

Two weeks into the YAIAA softball season, we've seen some surprises, some expectations met and some scores that made our jaws drop.

There's still plenty of games to be played, but so far most of the teams at the top of the standings are the ones that entered the season looking like contenders. Still, fans should have some good division races to look forward to the rest of the season.

With that in mind, here's four observations from around the league:

After going 10-8 and finishing second in Division II last season, the Warriors were expected to contend with Dover for the division title in 2016. But early on, Susquehannock looks like it may be one of the favorites to win the league tournament.

Not only are the Warriors 5-0, they've already beaten two of the best teams in the league in Dallastown and Delone Catholic. Pitchers Maddy Staub and Megan Green have limited opponents to three runs or fewer in every contest and fellow seniors Lily Yoakum and Mallory Lebo lead a deep lineup that is averaging more than 11 runs a game.

The Warriors currently lead Division II over Dover, which is 2-1 so far. The two teams will square off for the first time this season on April 20 at Susquehannock.

Not only does Susquehannock have the opportunity to make some serious noise in the YAIAA, it could also make a run in the District 3 Class AAA playoffs after losing in the first round last season.

Central, Dallastown battling in Division I

Central York was the class of the YAIAA last season, going 20-3 and winning the league tournament. But after losing six seniors to graduation, the Panthers entered 2016 facing questions about how they would perform with a much younger lineup.

So far, the Panthers are 4-0 and still look like a force in Division I. But in order to win another division title they'll have to get past a very talented Dallastown squad that is already 5-1.

Dallastown's Harbold excels on the diamond

With several key players back from a team that went 13-6 last season, the Wildcats have big expectations of their own this season. And with star senior Jaelynn Harbold proving to be one of the league's best pitchers and hitters, Dallastown is not an easy team to beat.

The Panthers and Wildcats play each other on April 20 and May 9. Both games could play a big part in deciding which team wins the division and has a shot at winning the YAIAA title. 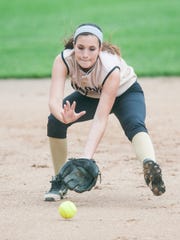 With the bulk of their rosters intact from last season's division-winning squads, the Thunderbolts and Squirettes were expected to be just as good if not better in 2016. And right now both teams are living up to those expectations.

Littlestown is currently 3-0 and Delone Catholic is 3-1 after losing to Susquehannock on Monday. The Thunderbolts have some competition in Division III from York Suburban (3-0) and Eastern York (2-0), but the Squirettes seem to have a firm grasp on Division IV.

But both squads likely have aspirations to not only win their divisions but also make a run in the league and district playoffs. Delone Catholic won District 3 Class AA last season while Littlestown lost in the quarterfinals in Class AAA.