After six years of work, Dover is on the verge of launching full varsity girls' and boys' lacrosse programs.

Minutes before pulling up to the team bus and departing for their first school-sanctioned lacrosse game Dover head coach Bryan Gamble and his daughter/starting goalie Shaely pulled over and soaked the monumental moment in.

The journey to that bus two weeks ago had been a long one. Eight years ago, Gamble had never even seen a lacrosse game. And five years ago, Dover had no trace of a lacrosse program. Now, after years of Gamble instilling a blueprint for a new program, they were about to get on a bus full of eager Dover Eagles ready to start season one.

"How far we had come and what we had accomplished hadn't really hit us until we saw that school bus," Gamble said. "We had a moment there where we realized what we had done."

On the drive to Harrisburg, Gamble delivered a message to his team, which is on its way to becoming the 13th girls' varsity lacrosse program in York County: "I told them it was all about making history," he said. "We let them know that this was their opportunity to make their stamp at Dover."

Maybe the speech worked, or maybe it was the five years of prepping for that day, but Dover won easily, 9-3, over Central Dauphin East, then followed it up days later with a win against Mechanicsburg. 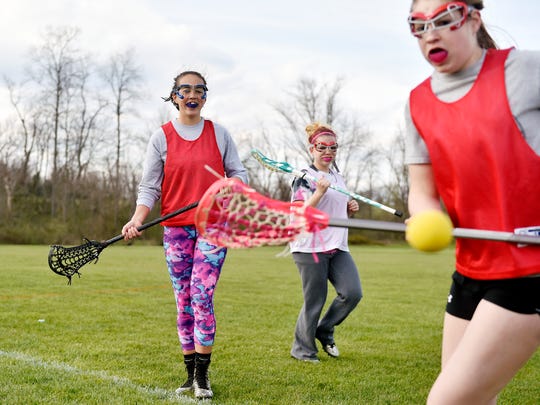 The smiles after the game made the six-year process all worth it, Gamble said, and it gave the players a sense of accomplishment.

"We were ecstatic and still talking about it the next day in school," Shaely Gamble said. "It made us hopeful."

Gamble is well aware that not every game will result in a win for Dover this season. He has starters who have been playing the game for only few months. And even if they did pile up seven or eight wins (which he sees as best-case scenario), the Eagles can't play in the league or district postseason until next year when they play a full 18-game schedule.

But for now, at least, it's not about wins and losses. It's about building a foundation for the program's future and for a few moments before that first road trip, it was about taking pride in the journey to this point.

"It's not necessarily about winning every game," senior Sarah Kistner said. "It's about having more people coming out and having the community support us. It's about us coming together as a team so in two or three years they still have a solid foundation here. I'm proud just to put on the Dover uniform."

Just seven years ago, Gamble was watching his son start to play lacrosse, which at that point was making its move into York County, but his background was baseball-heavy. Still, he started talking with another lacrosse dad at a barbecue about bringing the sport to Dover and two years later, they fielded their first team. Gamble, his wife Dana, and his friend Pete Anstadt built a youth program, then organized a budget to present to the Dover school board.

"We figured it could take four, five, six years before we had a high school team," Gamble said. "But we wanted to get it done before our kids graduated and were out of school."

Then materialized a "perfect storm," as Gamble called it. First a new, more pro-lacrosse superintendent was introduced at Dover. Then came a new trainer, who just happened to be the former Temple lacrosse trainer, who encouraged athletic director Rich Leathery to give lacrosse a chance like nearly every other York County school was doing.

When it came time for the school board to vote on instituting an official, school-sponsored program, several players from 10 club and high school teams around the region showed up outside the doors in their full lacrosse uniforms.

"It was a real 'We are Marshall' type moment," Gamble said with a smile.

"I don't think the board and other people realized how big the sport is getting," added Kistner, who is a University of Findlay commit. "Having them recognize that was huge."

After the board approval, the biggest challenges were cost and infrastructure, Gamble said.

Initial startup costs for a lacrosse program can top $50,000 by the time a school purchases player gear, goals, uniforms and equipment for junior varsity and varsity boys' and girls' teams. Then it's roughly $25,000 for a yearly operating cost, which is close to what many other sports require for gas, buses and referee fees. The coaches had to find a way to fund the startup fee and half of the first year's operating costs, and then the school district would pick up the tab for everything thereafter.

"Fortunately for us, Eagle Lacrosse donated the majority of the funds to get us started," said Dover boys' lacrosse coach Jeff Barker. "Otherwise I don't believe the board would have voted so easily to ratify our program's start."

Barker credits Gamble and Anstadt with helping get the boys' program off the ground. He said it was a bittersweet moment to step onto the field for the first time to coach Dover. The boys' team has had its share of struggles in its first two weeks, losing by double-digits to South Western and Mechanicsburg.

How long until the Dover teams are contending at the top of the YAIAA? Both coaches agreed it could be roughly three years.

"We're working on a culture here to play year round and be successful," Gamble said. "I see us giving the Susquehannocks and Kennard-Dales good games in three years. Whether we'll be able to win those games, I don't know. But we'll be competing at a high level."

It takes time to build a youth program and gain experience against varsity talent.

"I'm hoping we can grow our club program to continue our success at the high school level," Barker said. "The sport of lacrosse is a brotherhood that stays with you forever. The love for the game never goes away."

Five YAIAA players break down the basics of shooting and goaltending with our Brandon Stoneburg.