Dallastown's Grant Wertz celebrates at the wall after winning the 100-yard breaststroke for a pool, meet and league record during the YAIAA league swimming championship on Friday, Feb. 12, 2016. Jeff Lautenberger, For GameTimePA.com
Fullscreen

Dallastown's Jena Woods swims during the 100-yard breaststroke, where she placed second during the YAIAA league swimming championship on Friday, Feb. 12, 2016. Jeff Lautenberger, For GameTimePA.com
Fullscreen

Dallastown's Kacey Oberlander follows through as she wins the 100-yard backstroke during the YAIAA league swimming championship in February. Jeff Lautenberger, For GameTimePA.com
Fullscreen

Dallastown's Grant Wertz breaks through the water on the final stretch of the 100-yard breaststroke which he won during the YAIAA league swimming championship on Friday, Feb. 12, 2016. Jeff Lautenberger, For GameTimePA.com
Fullscreen

Teammates and other league swimmers sign the chest of New Oxford's Aaron Pecher, who was collecting a "scrapbook" of signatures during the YAIAA league swimming championship on Friday, Feb. 12, 2016. Jeff Lautenberger, For GameTimePA.com
Fullscreen

Red Lion's Dylan North breaks the water after a turn in the 100-yard backstroke during the YAIAA league swimming championship on Friday, Feb. 12, 2016. Jeff Lautenberger, For GameTimePA.com
Fullscreen

When she looked up at the Central York scoreboard at the end of the YAIAA girls’ swimming championship 100-yard freestyle event, Dover’s Maddi Hetrick thought something didn’t seem right.

“I didn’t think it was my time. I thought it had to be from another lane,” Hetrick said.

The sophomore was seeded seventh entering the race and thought she couldn’t have clocked a time of 56.02. She did and because of it became a YAIAA champion.

“It was my only event I had today, so I figured put everything I have into it,” Hetrick added. “I had no clue where I was until the last turn. I don’t kick a lot, so I had to make sure I kicked at the end.”

It was a great way to start the second night of a great meet for the Eagles.

Dover coach Rich Janosky added, “We had life-time best swims from every girl.”

The meet finished on a high note, too, as Dallastown and West York staged a duel in the 400 free relay. The race was tight throughout, and the crowd noise grew louder and louder.

When it was over, neither team was disappointed.

Seeded third coming in, Dallastown edged the Bulldogs, behind Sydney Hoover, Emma Balderson, Jena Woods and Kacey Oberlander. With Oberlander taking only 53.31 seconds to swim the final 100 yards, the Wildcats posted a 3:41.67.

Oberlander, who earlier in the night won the 100 backstroke by five seconds with her time of 56.70, was thrilled with her relay team.

“It’s more of a team race … It’s nice to have your teammates yelling on the blocks,” she said. “I knew we were seeded third. I told the girls, ‘Let’s go have fun.’ It was by far the most fun swim of the two days.”

West York was also happy with the 3:42.45 swam by the combination of Taylor Hoover, Maelyn Elder, Meghan French and Stoner. Taylor Hoover blazed to a 54.77 start.

The Bulldogs also have their sights set on the upcoming District 3 Class AA meet, where they figure to battle defending district champ York Suburban for team supremacy.

“We are probably going to amp it up the next two weeks, then take it easy the week of districts,” said hoarse-voiced West York coach Nicole Flowers. “We haven’t tapered at all. We are so excited to start the postseason, and here it is.”

Earlier in the meet, French was impressive while winning the 500 free with her time of 5:13.07. The freshman managed to stave off Dover’s Lindsay Brenneman, who dropped more than 11 seconds from her seed time. Abigayle Keating of Spring Grove was third.

Claudia Keller was second in the backstroke for the Bulldogs, and the Dallastown duo of Balderson and Lindsay O’Rourke tied for bronze. 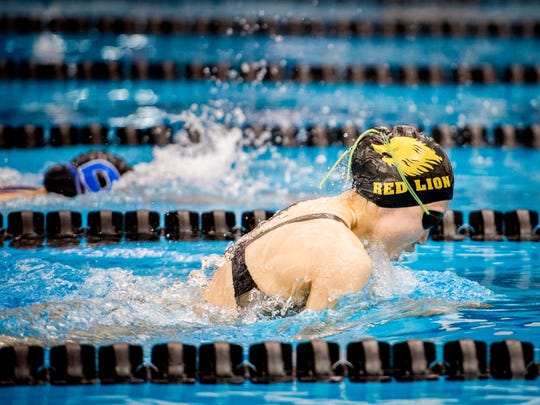 “I am pleased with my swim. I had good competition, so that helped me go even faster,” said Jessica after her 1:09.60.

A little sibling rivalry did hurt either as she added: “I am proud of him. I didn’t want to put pressure on myself, but I thought it would be nice to win, too.”

Woods and fellow Wildcat Isabella Wise placed second and third in the breaststroke.