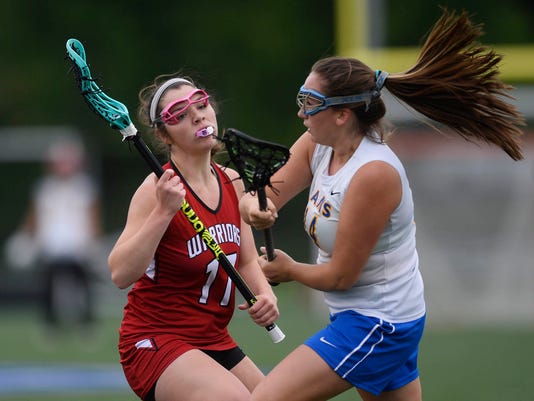 It’s easy to imagine that there might have been some added pressure for Maddie Day when the 2016 season opened.

Last year her older sister, Morgan, had set a national record in scoring, and helped lead Kennard-Dale girls’ lacrosse to a league title and a District 3 semifinals appearance. Morgan Day graduated — along with Brooke Davis and Lyndsey Duty — so the focus shifted to the younger Day sister.

But the expectations haven’t shaken Maddie Day one bit as she’s helped the Rams to a 10-0 overall record.

“I was really working hard to try to achieve what (Morgan) did because she was such a big role model for me,” Maddie Day said. “So I was trying to do what she did. Try to follow in her footsteps, and I guess it just kind of happened like that.”

Day’s scoring contributions have been a big asset for an already potent Kennard-Dale offense. The sophomore is the Rams leading scorer, with 41 goals and 11 assists. Day is also second in the league in goals scored.

The Kennard-Dale attacker credited the players she has around her as a big reason for her success.

“I feel like my team has really helped me out this season,” Day said. “Helping me to progress and step up. Everyone also stepped up, even though we lost some really good players like my sister. We’re all really working hard this season.”

Working hard is an idea that Kennard-Dale head coach Kelly Wetzel instils in his team. He wants the players to be “laxaholics” and to be students of the game.

It is an ideal that Day, along with the rest of the team, has bought into.

“She works hard. There are times when after practice she’ll go home and shoot another 50, 100, 200 shots,” Wetzel said. “I mean she works. So she’s put in the work to have the skills that she does have.”

Day and the Rams are getting down to the end of the season, and they still have two tough games ahead of them. Kennard-Dale will face undefeated York Catholic on Tuesday and battle Susquehannock to end the regular season on May 5.

Sandwiched in between those games is a matchup with another top team in the YAIAA, New Oxford, on May 2.

The Rams have not lost a regular season game against a YAIAA opponent since 2011. Day may anchor the scoring, but Emmie Dressel and Morgan Bowings are both 20-plus goal scorers for the Rams.

Stellar goaltending from Clare Boone has helped Kennard-Dale in the defensive end as well.

Wetzel understands that the end of the season schedule is tough, but he doesn’t want his team getting caught up looking forward to games too far ahead in the future.

“We figure one game at a time and it will take care of itself in the end,” he said. “But our tail end of our schedule is very difficult to be honest. It’s motivating because they know where they have to peak, so it’s pushing them I think.