Dover's resurgence based on defense

After several years of missing the girls' basketball postseason, the Eagles are back in the hunt.

Dover's resurgence based on defense

Rayah and Rajah Fink team up, lead Dover to top.

Dover's Rayah Fink dribbles up the court during a game in December. The seventh-seeded Eagles open the District 3 Class 5A tournament Tuesday when they host No. 10 Fleetwood.(Photo: Dan Rainville, GameTimePA.com)Buy Photo

There was a time, not long ago, that the Dover girls' basketball team was a fixture in the postseason.

The Eagles' 2013-14 squad was the District 3 Class 4A runner-up and advanced to the PIAA quarterfinals. That team also claimed the YAIAA Division II title and tournament championship.

Those hard times ended this season.

Kevin Glover took over the head coaching job after last season, making him the fourth Dover boss in as many years. The team responded to the change with a return to the postseason.

"All summer I would just point up at the wall (in the gym) and you see a county championship (banner) you see district basketball appearances. So you knew it was within reach," Glover said.

Troy Lokhaiser led the Eagles from the 2011-12 season through the 2013-14 campaign and went 71-15. Dover won Division II in each of Lokhaiser's last two years. In 2012-13, Dover was the top seed in the District 3 Class 4A tournament and finished fourth after losing in the semifinal round. The Eagles also got to the quarterfinal round of the PIAA tournament. 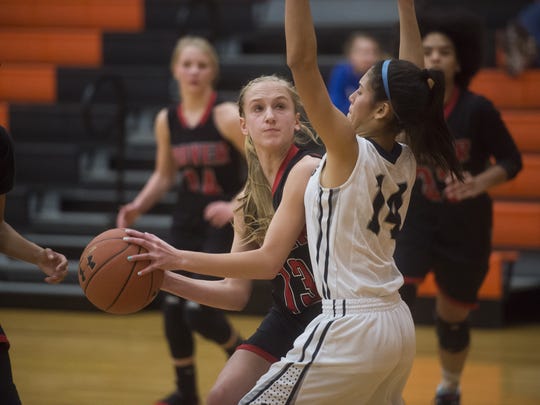 Marley Klunk and Bill Garrison then led the Eagles for one season apiece, setting the stage for Glover.

The big change he made was on defense.

"They gave up 50-some points per game last year and that's not going to happen for a county playoff team," Glover said. "We needed to get that down into the 30s and 40s. The girls put in a lot of work and things started to develop at team camp over the summer."

He felt that by tightening up its defense, Dover had a "realistic shot to win our division, if not, at least qualify for a county playoff spot."

The Eagles proved him right. They surrendered 37.7 points per game in the regular season, which propelled them to a 17-5 record for third place in the division and a spot in the YAIAA tournament.

The Eagles faced Division I champion Central York in the quarterfinal round on Friday and held the lead through the first 2 1/2 quarters.

"Our plan was to be aggressive with them because if you don't try to equal their aggression, you will be down by a lot early," Glover said following the game.

Dover led 15-11 after the first quarter and held a four-point lead at halftime, but the Panthers scored 40 second-half points to complete the comeback and eliminate the Eagles.

"Execution defensively wasn't where it should have been, but it was good enough for a lead," Glover said. "I told our players at halftime, to not get too comfortable. Central is Central, and we knew they were going to come out working extra hard. Once they made that run in the third quarter, we just never really recovered."

But, all is not lost for the Eagles, who qualified as the No. 7 seed for the District 3 Class 5A playoffs.

"We are blessed enough to host a district game," Glover said of the Eagles' game against No. 10 Fleetwood on Tuesday, Feb. 21.

"That was one of the goals. We wanted to bring something for our fans and community, they have been behind us. It's been a rough two years, but the community and school deserve a good first-round game at home."

Dover is led by Rajah and Rayah Fink, but there is more to the Eagles than that dynamic duo.

"The whole development aspect has been great," Glover said. "Alaina Reaver has become our best defender. She has worked her butt off and is having great season for us. Gabby Coley is getting better each game."

Even after suffering through back-to-back losing seasons and being a new head coach, Glover didn't shy away from challenging his team.

"We realistically thought we could accomplish these goals and once they started to believe in themselves (it started to come together)," Glover said. "We expected to be in the (county) playoffs. We put a lot of work in."