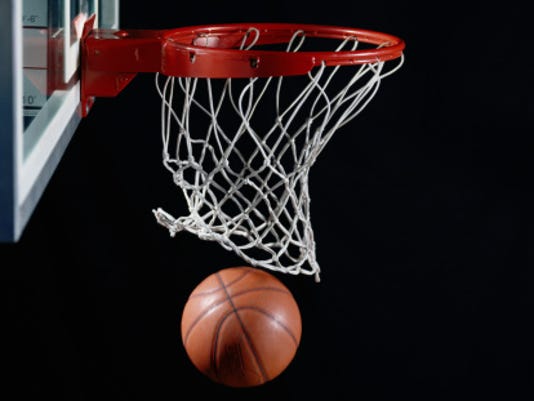 A stock image of a basketball going through a hoop.(Photo: Ryan McVay, Getty Images)

Now, they have a new emotion to replace it with: Unbridled joy.

York Suburban surged in the fourth quarter to down ELCO, 36-32, in Tuesday's District 3 Class AAA consolation round, securing a berth in the PIAA championship bracket for the first time since 2005-06.

After the game at Manheim Township High School, the emotion sank in for Suburban head coach Jess Barley.

"They're a great group of girls," Barley said as she held off tears of joy. "Any coach would be lucky to have the extra planned practices in March, but I'm especially lucky because of who I get to go to work with."

Suburban advances to the fifth-place game against Northern Lebanon. That matchup will determine the teams' seeding for the state tournament and is set for Thursday at a site and time to be determined.

The run isn't over for ELCO, either. The Raiders can clinch a state berth with a win in the seventh-place game Thursday against Bishop McDevitt with the final PIAA berth on the line.

"We play three freshman and one sophomore. All of this is a bonus for us with a young team, but it would be nice to get them one more win to get the experience," ELCO head coach Ashley Shay said.

It didn't always look as if Suburban would get its happy ending.

A 3-pointer by Taylor Bossert gave the Raiders a seven-point lead entering the final quarter.

But in the final frame, Suburban played like a team on a mission.

"The first three quarters were not great basketball," Barley said. "I told them at halftime, 'Let's not play not to lose.' In the fourth quarter, we cut loose."

A Suburban free throw cut ELCO's lead to 25-19 a minute into the fourth. Molly Day stole the inbound pass and swooped in for a Trojans layup.

Another bucket pulled Suburban to within 26-23. Gettle executed a spin move for a layup, and the whistle blew. The players and staff on the Suburban bench sprang to their feet, thinking Gettle would go to the line for the potentially tying free throw.

Instead, traveling was called.

A possession later, the Trojans missed a layup, but Gettle dove to the floor and won the loose ball. She sat up and found Parker Faircloth-Henise for a layup and one.

A minute later, the Trojans battled to keep possession behind two offensive rebounds by Molly Day and one by Gettle, who swooped in the back door for the go-ahead layup.

"We had poise in the fourth quarter," Gettle said. "We were just like, 'Let's go after it, this is what we worked so hard for.'"

Day stopped the next two ELCO possessions with a block and two defensive rebounds.

From then on, it was a free-throw shooting contest.

"Molly has always been clutch," Gettle said. "She's one of my best friends, and I've played with her since the third grade. I didn't want it to end (like last year)."