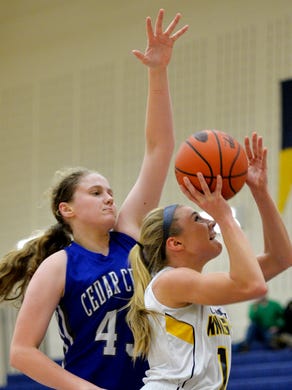 Eastern York's Hannah Myers puts up a shot while being defended by Cedar Crest's Alyssa Austin in the first half of Wednesday's tournament championship at Eastern York. Cedar Crest defeated The Golden Knights, 60-41. Chris Dunn/GameTimePA.com
Fullscreen 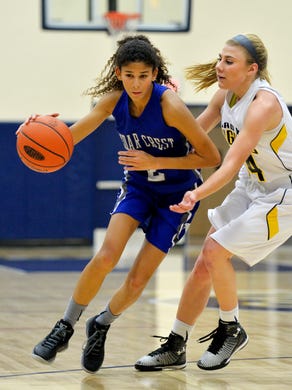 Cedar Crest's Alyssa Austin slapped together a triple-double by early in the third quarter to lead the Falcons to a 60-41 victory over Eastern York in the 26th Annual Eastern York Rotary Club girls basketball tournament Wednesday night in Wrightsville.

The 6-foot-1 junior center finished the night with 16 points, 14 rebounds and 11 blocked shots, while sitting out the fourth quarter due to her squad's large lead.

"She rebounds and blocks shots very well," Cedar Crest head coach Jim Donmoyer said of Austin. "She usually averages around 17 points and 12 rebounds and blocks about four shots per game. Tonight, they didn't have anyone big enough to guard her. We could've gone to her almost anytime we wanted to."

Austin had seven points, eight rebounds and six blocks in the first half and completed her triple-double with a layup at the 6:09 mark of the third quarter to make the score 40-23.

Cedar Crest (9-1) increased the lead to 55-34 after three quarters and Donmoyer played his bench the entire fourth quarter. 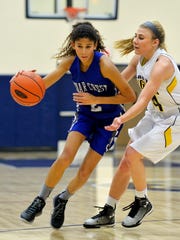 "We tried a couple of different defenses against her and none of them really worked," Eastern head coach Cheryl Land said. "Our girls don't quit, though. They play from beginning to end every game."

Early on, the Golden Knights stayed in the game and trailed 12-8 midway through the opening stanza when Hannah Myers scored.

Unfortunately for the hosts, they didn't score again until Myers' free throws with 4:09 left in the second quarter. By that point, the Falcons had built a 28-8 advantage.

Tournament MVP Ariel Jones was all over the floor for Crest in the first half and she finished the night with 14 points, four boards, three assists and five steals to earn the hardware.

"Ariel is a very good defender," Donmoyer said. "She's quick and she's a good scorer, too. Her and Alyssa make our team go, but they have help from the role players, as well."

One such role player is Skyanne Yancey who connected on four trifectas in the contest and finished with a game-high 16 points.

Eastern (3-7) was paced by Myers' 14 points and she earned an All-Tournament selection, while Brooke LeCasa put in 12 points for the Knights.

"We're encouraged by the growth of our team," Land said. "We're chipping away at things that we need to improve on and we're getting better as a team. We get back into (YAIAA II) play next week with Kennard-Dale and then start the second half. Hopefully we can play some of the teams that beat us closer and maybe win a few of those games."