A search for scorers in YAIAA girls' D-III

A search for scorers in YAIAA girls' D-III

A knee injury will sideline Hanover senior Soukaina Tracy for the season. She averaged 19.8 points per game last year and was on pace to break Hanover's career scoring mark in girls' basketball.(Photo: File/GameTimePA.com)

Get ready to see a lot of new names totaling up big points in the box scores of YAIAA Division III girls' basketball games this season.

It's a division-wide phenomenon that will happen for last year's top-four teams out of necessity. That's because York Catholic, Delone Catholic, Biglerville and Hanover all need to replace their leading scorers.

Other than Hanover — which expected to have Tracy back this season — the loss of a leading scorer is something coaches kept in the back of their minds last season.

“We’re not a year-to-year program, so we have in mind that kids are gonna graduate, it’s inevitable," York Catholic coach Kevin Bankos said.“We try to look two or three years down the road. That way you know you constantly have people in the funnel, or if you have to re-do it every year.”

The process of encouraging role players to feel comfortable taking more shots is something that the coaches started working on as soon as practice started in mid-November.

“I tell them, ‘if you don’t want to shoot it, then I’ll find somebody who does,’” Delone Catholic coach Gerry Eckenrode said. “We’re gonna score points. The shots (Comly) took last year, somebody else is gonna take this year. That’s just a natural progression.” 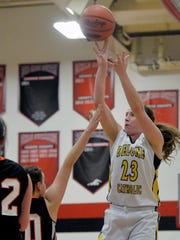 Ally Shipley will be asked to shoot early and often for Delone Catholic this year, which must replace top scorer -- and current college basketball player -- Maddie Comply. (Photo: File/GameTimePA.com)

York Catholic benefits from the return of sophomore Kate Bauhof, who scored 10.6 points per game in her first season. She's expected by many coaches to become a household name this year while leading the Fighting Irish offense and potentially flourishing as the team's lone returning starter. Bankos will fill out the rest of the starting lineup with players who gained experience off the bench a season ago.

Biglerville will have a new look as it embarks on a new quest without Issac, and with a new coach in Mark Silko.

Hanover fields a team dominated by juniors, and coach Denny Garman expects to have a more balanced attack.

"We have a much deeper team this year, we probably have 11 girls who can get varsity playing time," Garman said. "I think we're a team that will have a different leading scorer every night. We have six or seven girls who can go out and score 10 points."