The group of offensive linemen at Red Lion are like a band of brothers.

Here are the top football performers from Week 7 of the YAIAA season.

The group of offensive linemen at Red Lion are like a band of brothers.

Seniors Nick Argento, Stephen Tierney, Dakota Cleary, Jeff Lucas and Bronson Warner are in their second season of starting across the front for the Lions. And they're a big part of the reason Red Lion is off to a 7-0 start, poised at  No. 3 in the District 3 Class 6A power rankings with three weeks left in the regular season.

"They have done a fantastic job," said Red Lion coach Jesse Shay. "And everything you're seeing is because they worked hard and paid their dues. What's great is the young guys on the team seeing all this hard work and that it does pay off. In a world of instant gratification, football doesn't work like that. It's great for this program for everybody to see this happen."

They've come up through the junior high ranks together. The others got to see Argento start on the varsity level as a freshman. Then, some of them got to see playing time and starts as sophomores.

"For some of us, it has been since fourth grade," Tierney said. "We've been together forever, it seems like."

Then came last year, when all of them started on a 7-4 team that qualified for the District 3 Class 4A playoffs. The Lions lost in the first round to eventual district champ Cumberland Valley.

This year, through its first seven games, Red Lion has averaged a league-high 42.9 points and 381.9 yards of offense.

Now, all that stands between the Lions and an unbeaten regular season are three games: at Central York, at Spring Grove and against rival Dallastown. The last time the Lions went unbeaten was in 1974, when coach Don Dyke led Red Lion to a third-consecutive undefeated campaign.

Shay credited the line with anchoring this year's team.

"They come in together year round, and they will stay late together to work with Coach (Tom) Bell, the offensive line coach who has done a tremendous job with this group," Shay said. "He has really molded them and worked with them since they were freshmen."

"Everybody has put so much work in the past few years," Argento said. "Everybody was always there for the workouts, in-season or off-season. We've stuck together as a group and gotten the job done."

Last week's 63-14 YAIAA Division I win against New Oxford on homecoming was another example of how good this group has been this season. Red Lion scored four touchdowns on the ground and amassed 262 first-half rushing yards on just 16 carries.

"I think I'd say I love run blocking better (than pass blocking)," Argento said. "It's just better to try and dominate the defense and put them in the ground." 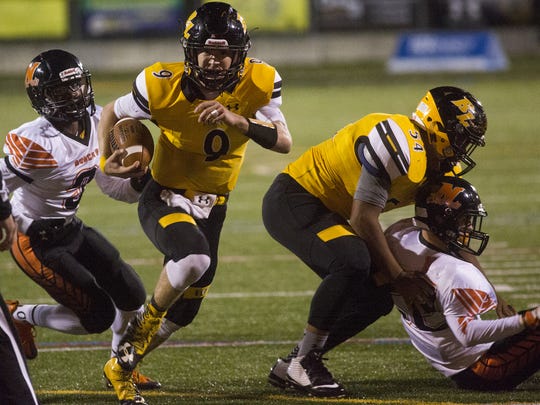 Red Lion quarterback Sam Emig, center, has rushed for a league-high 14 touchdowns this season, a testament to the work done by a seasoned offensive line. (Photo: Paul Chaplin, For GameTimePA.com)

They've helped propel quarterback Sam Emig and running back Dylan Gurreri into top-10 rushers in the league. Emig has rushed for a YAIAA-best 14 touchdowns this season.

"We have such great chemistry," Tierney said. "I know the guys next to me have just as much passion as I do about the game. What we do is just go out there and do what we do best. Move people off the ball."

Emig said he cannot remember being sacked once this season.

"They have such a close bond with each other," Emig said. "They do one heck of a job, to say the least. I'm very comfortable out there with them. No doubt about that."

Just how much has the line meant to the Lions program this season? Shay dug up a vintage line from former New York Yankees slugger Reggie Jackson.

"They are the straw that stirs the drink," Shay said. "They are so dedicated to each other and this team."