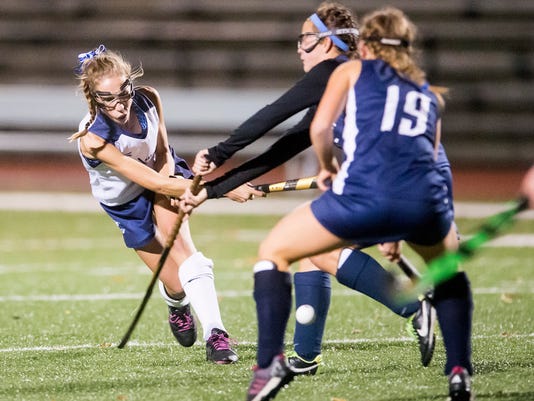 Trout will take the field for the program debut of the NCAA Division I LIU Brooklyn Blackbirds. She and District 3 foe Marisa Batista of Penn Manor signed their National Letters of Intent to play for the upstart program in downtown Brooklyn.

“It’s just going to be really fun just to be able to say that I get to start the first field hockey team,” said Trout, who will major in nursing. “And we’re going to be able to set all these bunch of first records. Like the first goal scored, our first win. All of these different things.”

Trout became aware of LIU Brooklyn when head coach Pat Kennedy reached out to her during a field hockey tournament in California. The senior has made several trips to New York and said she is excited about the chance to live just across the river from Manhattan.

“I’ve always loved visiting the city on bus trips. I’ve always dreamed of living there one day,” she said. “I’m just really excited for the whole big-city atmosphere and I’m really expecting a lot of fun. A lot of exploring to do.”

There will be a transition for the Dallastown captain off the field as well as on it. Trout has had plenty of success during her high school career, including capturing three YAIAA titles with her team in the last four years. The Wildcats made it to the District 3 tournament quarterfinals this past season, and Trout played in the senior all-star game this season.

However, she expects to face some challenges playing for an upstart program such as LIU Brooklyn since the team will be composed of a large number of freshmen.

“It’s going to be difficult the first year,” Trout said. “Because it’s a group of 18-year-olds going up against 21-, 22-year-olds basically. But by our senior year, we’re gonna be ready, and we’re gonna just kill everyone cause we’ve been playing with the same group of people for four years.

“It will be a hard transition from just winning every single game, but it’s OK cause it will just be fun just to play.”

Trout said she hopes she can take the lessons she’s learned over her four years at Dallastown and apply them as life moves forward, especially when it comes to working with other people.

“Just trust other people and you can’t do everything yourself,” she said. “You win as a team and you lose as a team. It helped me deal with having to work with other people.”