The Panthers earned a 3-2 win in the YAIAA volleyball tournament quarterfinals.

Central York's Zak Kakos celebrates after a point during the Panthers' 3-2 victory against Dallastown in the YAIAA boys' volleyball tournament quarterfinals at Dallastown Area High School, Monday, May 16, 2016. Paul Chaplin, For GameTimePA.com
Fullscreen

Every time Central York thought it had Dallastown put away, the Wildcats came right back during Monday’s YAIAA boys’ volleyball tournament quarterfinal.

The Panthers won the first two games, only to have Dallastown come back and even the match. In the deciding fifth set, Central led by four, only two points away from taking the match. But once again the Wildcats evened things up.

“I just thought about where I wanted to put the serve,” Wagner said of his final point. “For me, it’s fun. I love matches like this.”

Central will move on to face rival Northeastern in Tuesday’s 6 p.m. semifinal, back at Dallastown High School.

There was no such suspense in the other quarterfinal as York Suburban swept Susquehannock, 25-15, 25-10, 25-14. The Trojans will face Red Lion on Tuesday at the Dallastown Middle School at 6 p.m, with the two winners playing at the high school for the championship after the semis.

(Note: You can watch the YAIAA championship match live at GameTimePA.com.)

Wagner, who finished with 27 kills to go along with 3.5 blocks, three aces and four digs on the night, notched three kills during the Panthers’ 5-1 run that put them up 14-10 in the final game.

However, Dallastown took advantage of a hitting error and a lift, followed by a kill and block from Ben Ward (8 kills, 3 blocks, 2 digs) tied the game.

Sophomore Cole Johnson (10 kills, 8 digs) gave his team the lead, only to see the game tied at 15 on a hitting error. Finally, Wagner got his shot to end it, although neither he nor Central coach Todd Goodling was surprised the Wildcats kept fighting back.

“This was their championship. You knew they were going to come out stronger. They had nothing to lose,” Wagner said of the Wildcats, whose season came to an end.

“For them it was win or hang up the uniforms,” Goodling said. “We could never get any separation during the third game and after.”

With the scored tied at 16, the Panthers scored six straight points in the first set, grabbing the lead for good. A seven-point run early, followed later by a five-point blitz keyed the second game, which also ended on a Wagner ace. 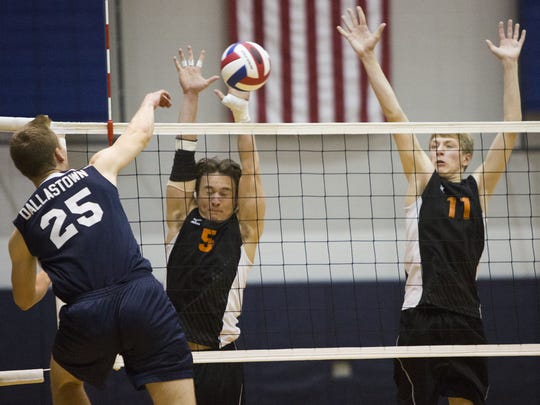 The Wildcats were in danger of being swept when Central took a 21-20 lead in Game 3, but Dallastown rallied to score four of the final five points. Avery Terroso had three of his eight kills late in the fourth game, which led to a deciding fifth.

“This was a great match for them to play, with districts and potential states ahead,” Goodling said. “I am really happy for this team. When we get out of our own way, we are going to be really good.”

Waiting for the long match to end might have hurt York Suburban, which found itself tied at 8-all during the opening set against the Warriors when Trojans coach Jamie Evans called an early timeout.

“We started a little slow. It’s like at a tournament when we wait around it happens,” Evans said. “It was a little sluggish. I knew we could pass the ball better.”