Boys' track and field: YAIAA races look to be tight

Don't expect to see much change at the top of the standings in York-Adams Division I boys' track and field this spring.

Boys' track and field: YAIAA races look to be tight

Check out some of the top returning boys' track and field athletes in the York-Adams league in 2017.

Don't expect to see much change at the top of the standings in York-Adams Division I boys' track and field this spring.

The top three teams from last season — Dallastown, Red Lion and South Western — appear to be the top squads once again. All three are established programs that bring back plenty of talented and experienced athletes.

After going 6-0 last season and claiming the division title, Dallastown might be the favorite once again. The Wildcats have some of the league's best athletes in the hurdles (Justin Atwood), distance events (Patrick Jacobson, Bryce Gable) and throws (Tony Nelo, Jack Kehr, Landon Firestone). While Dallastown has some holes to fill in other events, it should be able to compete with every team in the division.

But don't count out Red Lion or South Western, which are both strong in the sprints and hurdles. The Lions went 5-1 last season and have the best pole vaulter in the area in Greg Potter, who placed second at last year's Penn Relays. Red Lion also brings back strong returnees Paul Jones (sprints, triple jump), Noah Pillsbury (hurdles) and Dom Eyler (hurdles).

After going 4-2 a year ago, South Western returns plenty, including the league's returning 100-meter dash gold medalist in DeLunche Shaw. St. Mary's commit Dhane Schmelyun should continue to improve in the hurdles, while Drew Hartlaub could join Shaw as one of the league's top sprinters now that he's a year removed from a torn ACL.

Another team to keep an eye on is William Penn. The Bearcats boys' squad went 0-4 last season but have some exciting young sprinters and a strong 400 relay.

Going into his 31st season leading the York Suburban track program, Dave Wickenheiser is looking to go out on top.

The longtime coach is planning to retire at the end of this season, and he'll look to bring the Trojans one more division title before he leaves. York Suburban looks like the favorite in Division II after splitting the crown with Gettysburg and Eastern York a year ago. 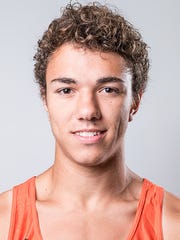 The top returnee for York Suburban is junior Bodhi Wilson, who captured a district title in the high jump last season and is also a capable sprinter. But the Trojans are also a deep team with talent in the distance events (Peter Wagner, Jarrett Raudensky) and throws (Ralph Casper).

If any teams are going to challenge Suburban, it will likely be Gettysburg and Eastern York. The Golden Knights have one of the league's best pole vaulters in Brady Gladfelter, while the Warriors expect to be competitive despite losing state champion triple jumper Ravaughn Dillard, who transferred to North Hagerstown in Maryland this past summer. Sprinter Edby Celius figures to be Gettysburg's top competitor.

West York might not factor into the division race, but the Bulldogs have some athletes who will be competitive in the league and the district. Senior discus thrower Luke Hoffman won the league title last season and qualified for the state tournament. 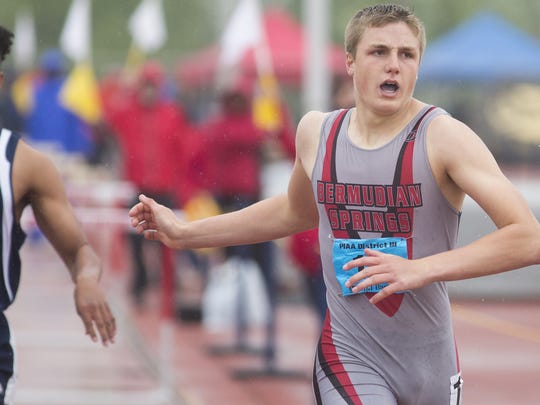 The teams to keep an eye on are Bermudian Springs and Littlestown. While Bolts split the division title with York County Tech last season, both graduated key athletes.

The Eagles, however, bring plenty back and could contend for the division title. Senior hurdler Trevor Grim returns after qualifying for the state championships the past two seasons in Class 3A. Other athletes including junior Chad Long (distance), senior Devon Hodgen (sprints) and junior Darren Beall (pole vault) give the Eagles depth and versatility.

While Littlestown has an established program and brings back district-qualifying sprinter Wes Storey, head coach Corey Bittle said the Bolts have a number of voids to fill. So does York County Tech, which graduated top sprinter Bry'quan Sweeney and middle-distance runner David Porter. Spartans coach Bradley Snell said senior newcomer Jordan Ray could make an impact in a few events right away.

Biglerville is coming off a 4-2 dual meet season, but it loses top distance runner Daniel Wood and the league's best javelin thrower in Ben Hurda. Senior Fisher Taylor gives the team a strong presence in the triple jump.