The Wildcats picked up five golds and three silvers at the YAIAA track and field championships. 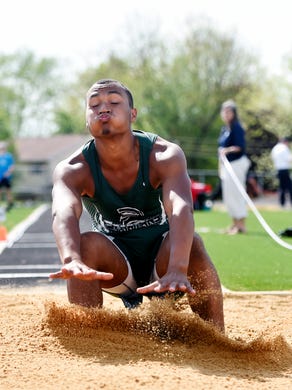 Delone Catholic girls greet each other after placing second in the 3200-meter relay during the YAIAA Track and Field Championships Friday, May 13, 2015, at Dallastown. Chris Dunn, York Daily Record
Fullscreen

Eastern York's Nathan Lopez takes the baton from Zach Falk for the anchor lap of the 3200-meter relay during the YAIAA Track and Field Championships Friday, May 13, 2015, at Dallastown. Chris Dunn, York Daily Record
Fullscreen 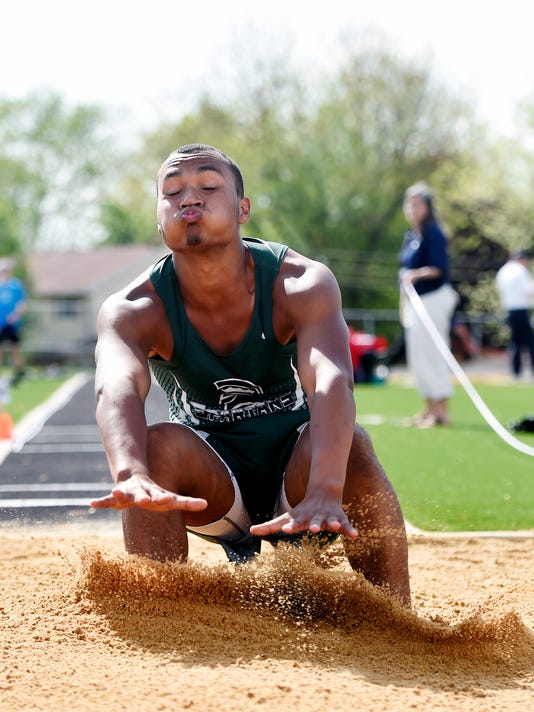 Here are more boys' highlights from the YAIAA track and field championships held Friday at Dallastown.

Shaw steps in for Hartlaub

When Drew Hartlaub, the top qualifier for the 100-meter dash, tweaked his groin in prelims and missed the finals, it seemed South Western might concede an event without the Mustangs'  top runner.

But that’s when Delunche Shaw stepped in. The sophomore, who had the ninth-best qualifying time, ran next to Hartlaub’s empty lane and won with a time of 11.08 — his best run of the season.

“It’s nice to have Delunche step up,” South Western head coach Bruce Lee said. “Hats off to him, he’s looking strong today and that was a great thing for him.”

Shaw first turned heads when he won the 100 at the Arctic Blast Invitational earlier in the season. Now with a YAIAA gold medal under his belt as a sophomore, his future is bright.

Full results from the YAIAA track and field championships

One of the most dominating performances came in the jumping area where Gettysburg’s Ravaughn Dillard, the defending state champion in the triple jump, put on a show.

Friday, Dillard won the triple jump, long jump and high jump. His triple jump distance of 46 feet, 8.50 inches was five feet farther than the next-best competitor. His long jump cleared 22 feet, and in his first year competing in the high jump, he won with a height of 6-5.

“We knew he’s very tall but doesn’t have much arch,” Gettysburg jump coach Mary Stewart said of Dillard’s first season in the high jump. “But he has amazing knee drive. He doesn’t need to arch because he sits over the bar and still makes it over.”

Gettysburg's Ravaughn Dillard going for medal #3 on the day @GameTimePA_SCpic.twitter.com/QiFmbYQnxF

Eastern York's Nathan Lopez takes the baton from Zach Falk for the anchor lap of the 3200-meter relay during the YAIAA Track and Field Championships Friday, May 13, 2015, at Dallastown. (Photo: Chris Dunn, York Daily Record)

South Western’s Josh Zeroth reached 51 feet in the shot put, which was more than enough to win gold. Eastern York took home gold in the 3,200 relay, Littlestown’s Jackson Hornbrook won the 400 meter dash, West York brothers Luke and Kyle Hoffman finished No. 1 and 2 in the discus throw, and Biglerville’s Ben Hurda blew away the competition in the javelin throw with a distance of 185-11.

“We tend to notice the guys who came in first, but not the guys who came in seventh but still had a PR,” Dallastown head coach Michael Schuler said. “From my perspective I’m just as excited for the guy who got fifth but got his first county medal as I am about the winners, and I think every other coach feels the same.”