Maybe it was fate or perhaps coincidence that spurred Andrew Radzik do a fourth-grade project on legendary runner Jesse Owens. It helped lay the foundation for the William Penn long jumper’s love affair with track and field.

RAVAUGHN DILLARD, Gettysburg, jr. | Last year's GameTimePA.com boys' track and field Athlete of the Year, Dillard returns to the Warriors to pick up where he left off. The only state champion in the YAIAA, Dillard took home PIAA Class AAA gold in the triple jump after leaping 47 feet, 11 inches to tie the school record. He also has a YAIAA title and finished fourth in districts. File, GameTimePA.com
Fullscreen 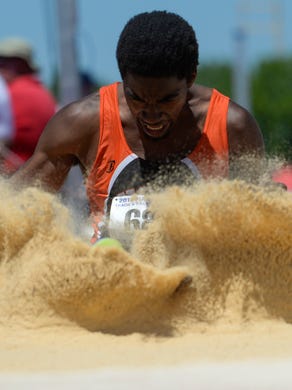 TONY NELO, Dallastown, jr. | As a sophomore, Nelo won a YAIAA title in the shot put and made it to the district championships. He also finished third in the event during the 22nd White Rose Invitational. Submitted
Fullscreen

JUSTIN TRACY, Dallastown, sr. | Tracy enters his senior season after winning a YAIAA title in the high jump last May and then finishing 20th in the same event in the AAU Junior Olympics in Norfolk, Virginia. File, GameTimePA.com
Fullscreen

TAVIAN DORSEY, Delone Catholic, sr. | Dorsey was a GameTimePA.com honorable mention selection last season and made a presence throughout the year. He finished the season ranked 15th in the state in the 100 meters and advanced to the semifinals in that event at the state championships. File, GameTimePA.com
Fullscreen

LUKE HOFFMAN, West York, jr. | Hoffman had a successful sophomore campaign, winning the discus throw – in front of his older brother Kyle – during every dual meet for the Bulldogs. Hoffman also placed second in the event in the YAIAA championships. File, GameTimePA.com
Fullscreen

Marquise Camel, Gettysburg, sr. -- Camel is another returnee for a Gettysburg team that had success in their first year in the YAIAA. He finished third in the high jump at the YAIAA championships. GameTimePA
Fullscreen

Bry'Quan Sweeney, York County Tech senior -- Sweeney is another honorable mention on last year's GameTimePA.com track and field all-star team. He finished sixth in the 100- and 200-meter dashes in the league championships and made it to the semifinals of the District 3 meet. GameTimePA
Fullscreen

Maybe it was fate or perhaps coincidence that spurred Andrew Radzik do a fourth-grade project on legendary runner Jesse Owens. It helped lay the foundation for the William Penn long jumper’s love affair with track and field.

“He was an inspiration,” the senior said before a recent track and field practice. And while that fourth-grade project set the stage for Radzik, the 2012 Olympics ignited his desire to participate in the sport.

“I remember watching it,” he said. “It looked fun. ... The (400 relay), that’s the most exciting race, and I remember seeing it, and you want to be part of it. Then when you’re actually part of (the team) it’s like, you wanna stay there.

“You want to stay on the team, so that’s the one thing that drove me.”

Now in his fourth year of track and field, Radzik is a rare commodity for William Penn head coach Tony Jones. The Bearcats enter the 2016 season with only three senior boys on the squad — Radzik being one of them. More than half the boys' team consists of freshman.

Jones said he knows his young team will have ups and downs this season. That’s what makes having an athlete like Radzik so important. 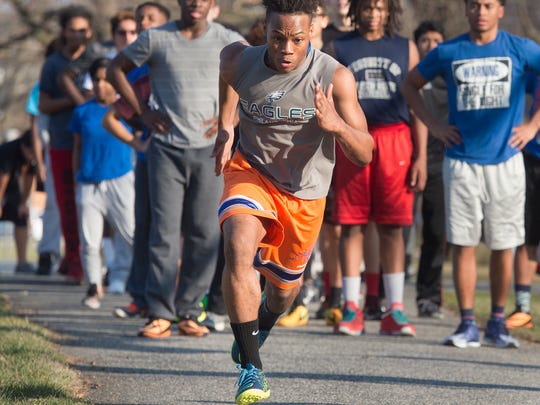 Andrew Radzik sprints during William Penn's track and field practice earlier this month. He's one of just three seniors on the Bearcats' boys' squad but said he's ready to step up as a leader.I’ve seen how the leaders last year led. "All I have to do is just encourage my team and provide whatever leadership I can,” he said. (Photo: Paul Kuehnel, GameTimePA.com)

“He’s one of those kind of guys that you look up to because he’s always there,” Jones said. “He’s always going to be in the mix of everything, good or bad. We’re going to go through some trouble at times. Kids running, kids not running, kids coming late to practice. … He’s not fastest kid on our team, but he’s the one I can look up to. I can know if I put him in an event, he’ll do what I ask him to do.”

Radzik didn’t appear nervous when he talked about taking a leadership role this season, although it goes against his personality. He described himself as an introvert who usually likes to be by himself.

Still, he is embracing the role.

“At first whenever I try something new I’m kind of apprehensive about it,” Radzik said. “But then I usually try to look at it optimistically, and it usually ends up turning out good. That’s what I’ve learned as a senior is don’t be afraid to try anything new.”

He added: “It’s just experience. I’ve seen how the leaders last year led. All I have to do is just encourage my team and provide whatever leadership I can.”