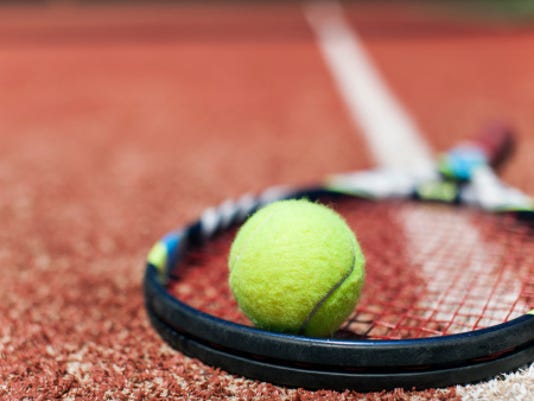 A stock image of a tennis ball and racquet.(Photo: iconarts, Getty Images/iStockphoto)

When Toby Good graduated Gettysburg High School, he left some unfinished business on the tennis court.

Now, he's getting an unexpected chance to take care of that as a first-year head coach at his alma mater.

"It definitely means a lot, it's very very cool to back at the school I went to" Good said. "When I played, we had a lot of fun with good players. A couple of years, we could have made some moves in the Mid-Penn, but we didn't."

Good can now add "division champion" to his resume, as the Warriors wrapped up at least a share of the YAIAA Division II tennis title with a 6-1 win over York Suburban on Thursday.

"Now seeing these guys come through, it's pretty special," Good said. "They worked hard to get here. It's a nice combination of efforts."

The Warriors (10-2, 7-1) have finished their league slate, and will now set their eyes on coming off the bubble and into the District 3 tennis bracket.

They currently sit in the eighth and final playoff spot, with a non-league date against Red Lion looming early next week.

"A lot of guys have been checking the District 3 power rankings daily. It's a hot topic of discussion every day," Warriors' No.-1 singles player Adam Yingling said. "Being prominent in the division and districts is nice."

Coming off a middle-of-the pack finish in YAIAA Division II in 2015, the Warriors were hoping just to be competitive this year.

"To be honest, I didn't think we'd be in this position," Yingling said. "I thought we'd get a lot of new guys in here and maybe be competitive like we were last year. I really didn't think this was possible until a couple of matches in, when we were beating teams we'd normally lose to."

Gettysburg fought for a 5-2 opening win against Spring Grove. None of its remaining season matches went deep enough into the evening to receive the bright spot light of the court lights.

"Our first match against Spring Grove was a tough one," Good said. "The next couple of matches, we steam-rolled. Never did I get to the point where I took anything for granted, and thought, 'Oh, we're big-time now', but as the season progressed, we kept beating people 7-0, and special things started to seem possible."

Led by four seniors, Gettysburg has gone 68-16 in individual matches this year.

First-year tennis player Bobby Weikert (11-1, 8-0) has the best winning percentage, and he worked his way up to No. 4 singles after starting the year at No. 5.

"Over the summer, any free time I had, I would come play with (my teammates)," Weikert said.

Weikert had the quickest match on Thursday, beating Drew Thompson 6-0, 6-0 in 30 minutes.

He blew a 0-30 lead in Jacob Arbetman's first service game and fell behind 1-0. However, he recovered well.

He ended the match, and sewed up the Division title with a forehand winner to the back corner, ending an exciting 9-stroke rally, which saw Arbetman stay alive on a short backhand that barely clipped the line.