Nate Newberry has never followed the spring routine that many football players and wrestlers stick to. 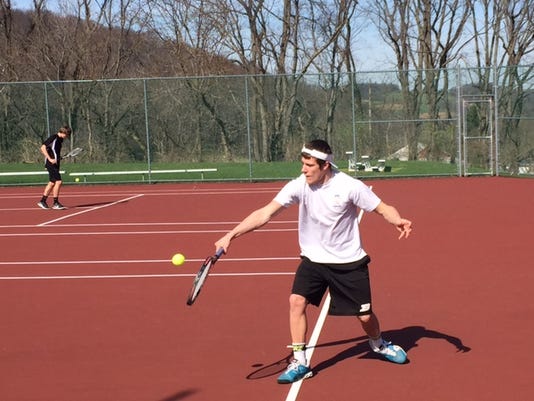 Nate Newberry has never followed the spring routine that many football players and wrestlers stick to.

While many of those athletes spend the last few months of the school year running track or lifting weights to prepare for football season, Newberry has always played tennis.

"(Biglerville football and track head coach Alex) Ramos jokes around with me whenever I don't score in football that I'm too slow because I don't do track because I play tennis," Newberry said.

Newberry's senior year has already featured some big athletic accomplishments. He started at defensive back and wide receiver as the Canners went 8-4 in football season. He captured sectional, district and regional titles at 152 pounds in wrestling. He capped his wrestling season by finishing fourth at the PIAA Class AA tournament.

Now that those sports are over, Newberry has taken on the role of No. 1 singles player on Biglerville's tennis team. After going through the physical grind of football and wrestling, he's happy to be playing a non-contact sport for a change.

"It’s a slower game so it’s a good transition," he said. "But it’s a fun sport. I don’t care about wins and losses in tennis. It’s just about getting out here and having fun.”

Prior to high school, Newberry had never picked up a racket and didn't plan on playing the sport. He decided to give it a shot his freshman year when his neighbor, tennis player Cole Herzing, encouraged him to join because the team was short on players.

It took some time for him to learn the basics, but Newberry's athleticism helped him catch on. Although he said he only practices in the spring, he's developed into the Canners' top player.

While Newberry enjoys playing tennis, he admits he'll never have the same passion for it that he does for wrestling. Still, his presence has been extremely vital for a program that struggles to find players.

Biglerville has only six players on its team this season, two more than when Newberry joined the program his freshman year. According to junior Gabe May, who also plays football and wrestles, the Canners would have "probably one" if it wasn't for Newberry.

"I started playing last year just because (Newberry) was playing," May said. "He came up to me one day and said it was pretty fun and we actually learn some stuff. I've enjoyed it."

Biglerville head coach Mark Silko said the Canners would probably have three players if Newberry didn't play, but agreed that the star wrestler has helped tennis become more popular around the school.

"We certainly wouldn’t have a full team,” Silko said. "He’s just a good kid, a fun kid, a winner. And he's an inspiration. While he was wrestling and school was in session, they would broadcast every time he won and you could hear the cheers going up through the whole school.”

A three-sport captain and Biglerville's only senior tennis player, Newberry enjoys being a leader and recruiting players to join the team. While he said some of his friends from football and wrestling joke with him about being a "tennis stud," he's never let it bother him.

Having committed to Bloomsburg University where he plans to wrestle and study business management, Newberry will soon be finished playing competitive tennis. But that doesn't mean he'll never pick up a racket again.

“If somebody asks me to play, yeah I’ll pick up a tennis racket," Newberry said. "If you put your time in you can definitely be good. We’re getting some freshman out here and a lot of kids are seeing that it's fun."