Gettysburg boys' soccer back on top of YAIAA

Gettysburg boys' soccer back on top of YAIAA 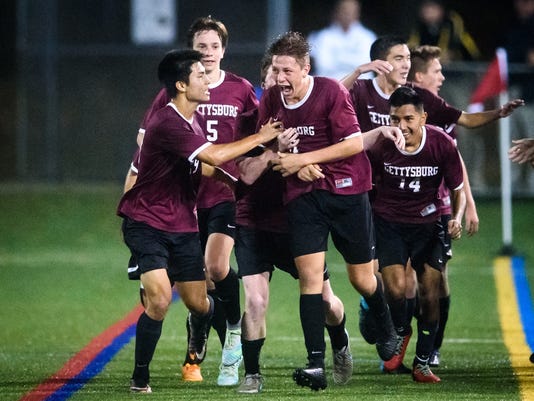 With five minutes to play, the YAIAA boys’ soccer championship game between Gettysburg and Central York looked destined for overtime.

That was until Drew Wivell sent a ball sailing into the box and a leaping Cade Wilhelm connected with the header, sending the ball into the Central net. The crafty play with 4:26 left in the game gave the Warriors a 2-1 lead, and eventually a win to secure their second consecutive county title.

“I knew Drew was going to put a brilliant ball in the box, cause he always does,” Wilhelm said. “I think all I had to do was put a head on it. I was basically standing in the goal.”

It was a fitting ending to a very hard fought game between Central York and Gettysburg. The contest saw a combined 15 shots on goal, numerous scoring chances and was a physical battle for most of the 80 minute affair.

“They had us pinned in our box a lot and our backs were kind of holding back. We just had to capitalize on our chances and that’s what helped us win the game,” Wilhelm said.

While the two teams traded the momentum and scoring chances, it was Gettysburg that quickly put itself on the scoreboard. Matt Yingling fired a shot from deep outside the penalty area and it found its way into the back of the net to give the Warriors a 1-0 lead roughly five minutes into the game. 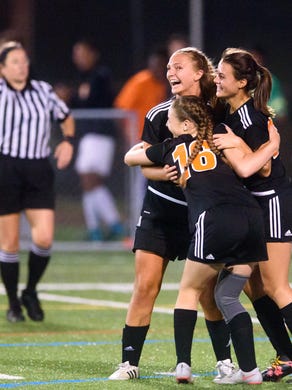 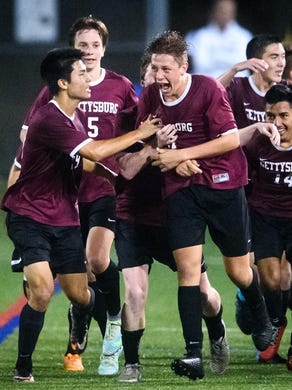 Central York's Danny Horner (10) reacts after a near miss of a shot on goal against Gettysburg during the YAIAA boys soccer championship game at Red Lion on Thursday, Oct. 20, 2016. Gettysburg won 2-1. Jeff Lautenberger/For GameTimePA.com
Fullscreen

That would be the only goal from either side until the second half, as both keepers went into shutdown mode. Warriors’ goalie Yanni Tassou and Panthers’ goalie Kameron Stoll finished the night with six saves each, which included several shots from up close and for Stoll, a breakaway opportunity for Yingling.

The Panthers finally evened the game up with 23:59 to play in the game off a goal from Nicholas Starr and moments later nearly found the net off a cross from Pierce Miller. However, Miller’s cross into the box couldn’t connect with another teammate.

Then in the closing seconds of the game, the Warriors found a way to pull out the win.

“Part of the mentality is, can we win some games that we’re not supposed to win. I think the last two games they’ve done that and we’ll see if we can keep doing that,” Warriors coach Scott Hancock said.

“I’m proud of my boys,” Leno said. “We had a great year and we’re going to look forward to Tuesday.”