Check out the top five plays from around GameTimePA.com from the week of April 10-16. 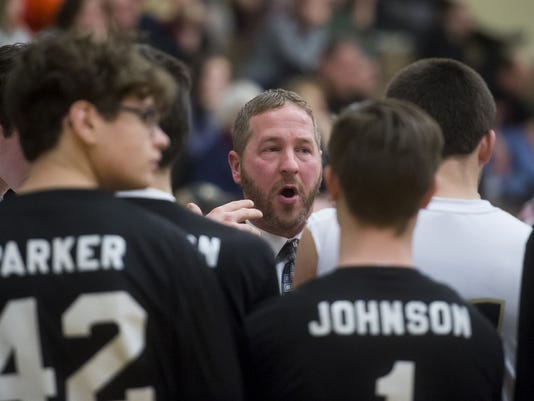 Biglerville boys' basketball coach Steve Elsier speaks to his team during a game against Hanover. Elsier stepped down as he and his family are moving to the Pittsburgh area.(Photo: Dan Rainville, GameTimePA.com)Buy Photo

Elsier, who has resigned as he and his family prepare to move to the Pittsburgh area, posted a career record of 48-129 with the Canners.

But his teams improved every year, and he never turned in a record that was worse than the previous season. Biglerville posted two wins in Elsier's first year at the helm, improving steadily to 13 wins this past season. He guided the Canners to the District 3 playoffs twice (2014 and 2017).

"I am proud that we were able to build a real program here, and we did this despite never having more than 15 players total on the JV and varsity teams," he said. "When I started at Biglerville, there was 12 cents in the bank account. No one played summer league and there were just a few practice jerseys."

Elsier said he he plans to continue his coaching career in western Pennsylvania.

"My wife got a great job offer from FedEx, and I have a great opportunity to start my own business through Horace Mann doing investments and insurance sales through the Pittsburgh Public School District," he said. "In terms of coaching basketball, I am a lifer. I love working with kids and running a program."

"There are two positions there that I will be interviewing for soon and they both larger schools with some basketball tradition."

Back in Biglerville, meanwhile, the team's next coaching hire will inherit a squad that returns three starters in Cody Shaffer (13.5 points per game), Gavin Parker (13.0) and Drew Riley (10.9), along with sixth man Noah Weaver.

"The program is in great shape with three of the five starters returning and four of the six guys that made up our main rotation last year," Elsier said. "The team will be very competitive the next two or three years.

"The key is going to be developing the young players in the middle school and that will determine how successful the new coach is down the road."