Spring Grove's Eli Brooks has been on the radar of Division I college programs and the recruiting season heats up in July with several AAU showcase tournaments.

Spring Grove senior Eli Brooks punctuated his final high school basketball season by earning a spot on the 2016-17 Pennsylvania Sports Writers All-State Boys' Basketball Team. Brooks, who has committed to play basketball at the University of Michigan next season, earned a first-team honor in Class 5A after a senior season where he led the YAIAA in scoring and led his team to a state quarterfinal appearance.

The girls' all-state teams are scheduled to be released Saturday.

Brooks averaged just under 30 points per game, scoring more than 900 points on the year and ending his career with the second-highest career point total for a boys' basketball player in the YAIAA. Yet, Brooks picked two playoff victories as the biggest accomplishment of his impressive season.

"I would think the state wins would have to be the biggest thing," Brooks said earlier this week. "That's what we were looking for at the beginning of the season. So I think it was good to get that over with and under our belt.

"It feels great knowing that we'll go down in history as the first (Spring Grove team) to win a state tournament game. It's something people won't forget."

It's the second consecutive season where Brooks earned all-state honors, after being named to the then largest classification, Class 4A, second team following his junior year.

Recruited by several NCAA powerhouse programs following his junior year, Brooks turned down a scholarship offer from the then-defending national champion Villanova Wildcats, among others, to sign with John Beilein's Wolverines.

"Being the all-time leading scorer at Spring Grove meant a lot to me," said Brooks, who scored more than 2,000 points. "Just as a little kid, I looked up at the banner. I would always check how many points I needed to average to see if I could beat it or not."

Rizzuto and Mulbah earned all-state honors after helping lead the Bobcats to several firsts in the program's history.

"It's a big confidence booster," Rizzuto said of the honor.

"All these years we've been projected to be this great team," Rizzuto said about Northeastern, "and then we lost early. This year, winning districts was huge and winning (the YAIAA) was huge."

The group, led by a pair of seniors and some outstanding underclassmen, advanced farther than any Northeastern squad had in the state tournament. After a thrilling double-overtime victory in a state quarterfinal, the Bobcats bowed out in a state semifinal. But Northeastern returns four of its top six players next season.

"We're going to be good next year, and you can quote me on that," Rizzuto said about the upcoming 2017-18 season. 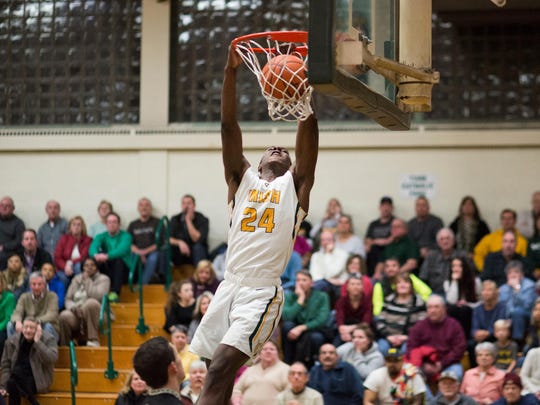 York Catholic's Martin was the area's only all-state selection in 3A. A 6-foot-5 center, Martin could score from the high post and low post. He helped the Irish reach the state tournament.

"I'm just surprised from where I've come," said Martin, who recalled being cut from his eighth-grade basketball team. "I just worked to get better. It paid off."

Martin is headed to Lincoln University next season.

The Greyhounds won their second consecutive District 3 tournament and reached the Class 1A state quarterfinal, falling in overtime to eventual state finalist Girard College. Brown earned a second-team nod for the second straight season. He was joined by classmate Jordan Ray on the second team. Gorham, in his first year with the Greyhounds, earned a third-team nod.

"This speaks volumes about the work we put in during the offseason," Ray said. "We worked hard.

"When all-state came out last season, I knew I had to get it done this year because it was my last chance."

Headed to Hampton to play football next season, Ray said he could still consider playing basketball depending how his freshman year of college unfolds.

Find a complete listing of this season's all-state selections here.