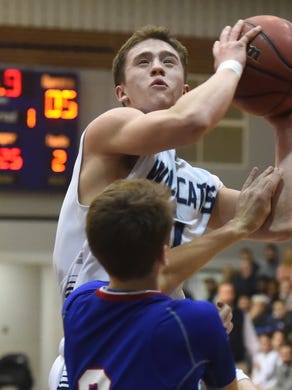 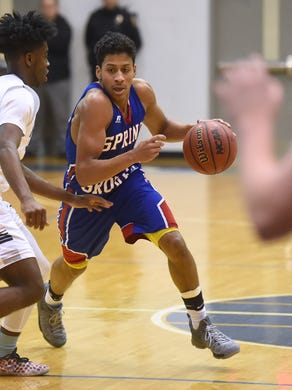 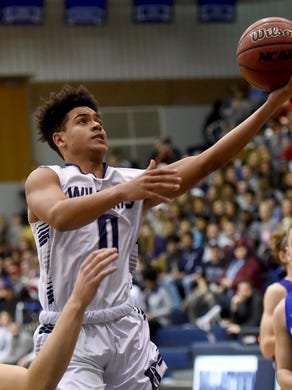 Instead, he found Drew Gordon in the paint, and Gordon banked in the winning shot with 2.1 seconds to go in Spring Grove's 62-58 win against Dallastown in YAIAA Division I boys' basketball action Tuesday night.

"They had three guys on Eli, so I was just trying to make myself available," Gordon said. "He found me and I was able to score."

Dallastown (13-7, 7-6) had a chance to tie but was whistled for stepping over the inbounds line and a pair of free throws from Brooks with 1.3 seconds to play iced it for the Rockets.

That finished Brooks' line at 20 points, 16 rebounds and six assists.

But it wasn't the Brooks show in the first half. He scored just four of the Rockets' first 22 points of the game and had six at the half as his team took a 26-23 lead to the break.

YAIAA power rankings: Make way for a new No. 1

Jake Messersmith and Gordon buoyed the Spring Grove offense in the opening half with eight points and six points before intermission.

"We tried to stick with what we do and play our game," Brooks said. "They got us off our game at times tonight, but we were able to get back to it." 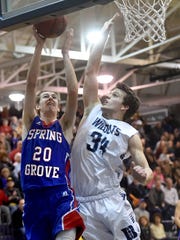 "The guys have really grown into their roles and they know what to do and how to do it successfully," James Brooks said. "I don't think we win this game had it been earlier in the season."

The win, along with Northeastern's 85-83 win over William Penn means that the Rockets and Bobcats are in line to finish in a tie atop Division I, assuming both teams win their YAIAA finales on Friday. The Rockets host Central York, and the Bobcats host New Oxford.

If both teams win, the Rockets would earn the top seed from the division going into the YAIAA tournament, according to coach Brooks.

Coupled with Central York's win against South Western on Tuesday, the loss for Dallastown eliminates the Wildcats from the possibility of qualifying for the league tournament. But they entered Tuesday in ninth place in the District 3 Class 6A rankings, where the top 12 qualify.