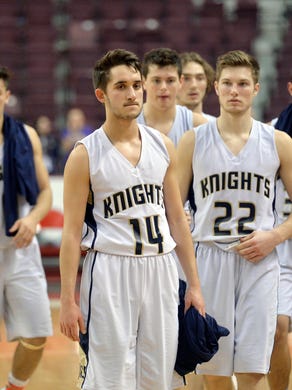 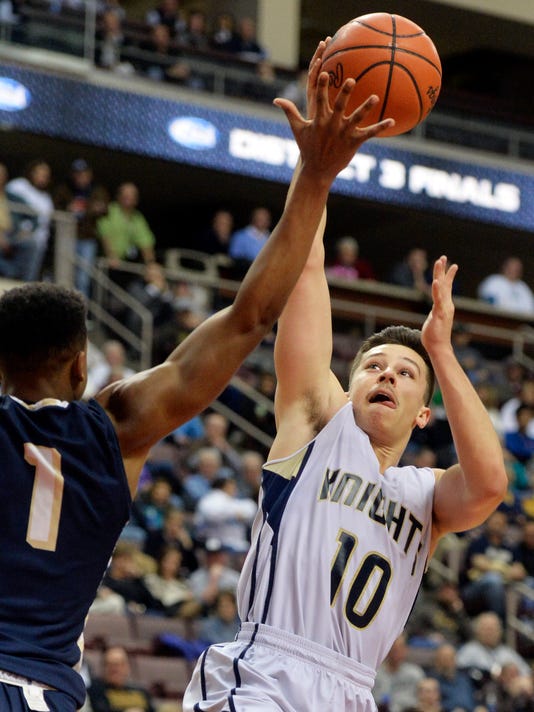 With a front line that resembled a football team more than a basketball squad, the Crusaders dominated Eastern York inside, blocking 14 shots, taking the Knights out of their game and eventually pulling away, 71-47.

Everything was made difficult for the Golden Knights, said head coach Jon Reichard, who compared the loss to "going to the dentist."

"That's an athletic team and that's the best team we've played all year, hands down," Reichard admitted. "They are very well coached and they played a great basketball game and we did not respond for the first time in a while."

The Crusaders sent a message early, forcing two turnovers, blocking three shots and altering another on Eastern's first six possessions. By the time the Golden Knights got on the board, they were down 11-0.

The first quarter ended with Bishop McDevitt leading 24-14 after the Crusaders blocked four shots and out-rebounded the Knights, 8-1. And at the other end, the majority of McDevitt's points were coming inside with forwards James Williams (6-foot-4) and Tim Kater (6-foot-3) combining for 31 points. Williams added nine blocks on the defensive end.

"We haven't played a kid as athletic as Williams," Reichard said of the Crusaders' forward, who finished with 21 points and 13 rebounds. "He stopped everything...We got some nice looks under the basket and he erased it." 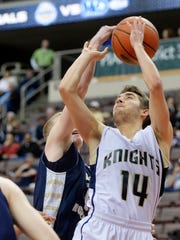 Two of Williams' blocks came in a crucial stretch early in the third. With Eastern trailing by 11 coming out of intermission, McDevitt grabbed five of the first six rebounds which led to eight second-chance points and a 9-3 run to start the second half.

"We talked about the first three minutes and we've been down a lot at halftime," Reichard said. "Third quarter has been our best quarter by far and I thought we would respond again. We didn't get a couple of shots and they got on a run....I think (Williams) had another block, then we ran a set play and he blocked it again."

When a team is dominating in the paint like that, it pushes the other team outside and forces them to settle for outside shots. Unfortunately for the Knights, the outside shot wasn't falling. Broguen Nicholas, Jarad Woods and Evan Springer — who combined for 59 points in the upset over top-seeded Milton Hershey — were held to 24 combined on Thursday.

"Nicholas was being hounded and double-teamed all night," Reichard said. "Woods had Williams on him as soon as he caught the ball so it was hard for him to dribble drive...They played good defense on Springer. They played good team defense all around."

Eastern isn't alone. The Crusaders beat their first three playoff opponents by 21, 23 and 19 points with the same stellar inside play. And the Knights, who entered the season projected to finish third or fourth in their own division, will still get a trip to states where they'll take on the fourth-place team from District 12. Wrightsville residents even lined the streets to wish the Golden Knights good luck on their way from Eastern to the Giant Center.

"This thing right here isn't a bad thing to hang around your neck," Reichard said holding up his silver medal. "There are a lot of teams who would've liked to be in this spot. It was one heck of a run."