Now the Greyhounds, who sit atop the District 3 Class A standings, are .17 power rating points ahead of second-place Millersburg – the same rating difference between the No. 2 and No. 14 teams in the rankings. Coach Corey Stiles’ squad has essentially been the Golden State Warriors of Class A this season, dominating the opponents in front of them.

The more impressive part is that the Greyhounds, who finished 5-11 last season, are doing this with a junior-heavy rotation while meshing in two key new pieces – D.J. Hamilton and DeAireus Brown – who both transferred from Northeastern before the start of the season.

"When I heard D.J. and DeAireus were coming, that was the No. 1 thing on my mind," junior Jordan Ray said of going undefeated. "I don't want to lose a game."

Now the Greyhounds have their sights set on a district title. And if Wednesday’s performance was any indication, a gold medal is well within reach. York Country Day got off to a slow start and trailed 17-16 after the first quarter but took over in the second.

"We (Brown and Ray) kind of looked at each other after the first quarter and said 'This isn't the way the game is supposed to go,'" Ray said. "We know we have a target on our backs from the beginning now that we're undefeated. Not a lot of people expected that. So we knew we had to come out and play the way we play."

The Greyhounds outscored High Point, 25-6, in the second quarter, using a strong defense that forced the Eagles to miss their first seven shots from the field. Luke Greisler provided a lift off the bench with 11 rebounds (five offensive) and Brown, who scored 22 of his game-high 26 points in the first half, dropped 11 in the second quarter. Ray and Brown combined for 34 of the Greyhounds' 41 first-half points and 50 total on the night. By the fourth quarter they were on the bench cheering on their teammates with the game well in hand.

"I know I have some players in there who would say yes they expected this, but for me, no absolutely not," Stiles added. "I know we're not supposed to look ahead but for me and a lot of those guys in there, an undefeated season would be incredible especially at this school. But right now we can't look ahead."

The win was crucial in starting off an exhausting stretch on a good note. The Greyhounds will play six more games over the next eight days – a result of winter postponements added on top of an already challenging back stretch of the schedule. York Country Day treats every game like a championship game, Stiles said, but there's no doubt that a district title and then a run in the state tournament is a realistic goal.

"The ceiling? A run in states," Stiles said. "I know there are a lot of good teams out there but as of right now I could see us running through districts. I think a loss in district would be us hurting ourselves." 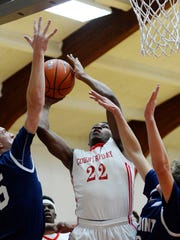 Brown and Ray agreed with Stiles.

"The sky's the limit for us," they said in unison.

"If we put a ceiling on it, then we get too comfortable," Ray said. "That's when we play like we did in the first quarter tonight. And if we do that, there's no way we'll be district champions."