Northeastern's Kobi Nwandu takes the ball to the basket against the defense of William Penn's Montrel Morgan, right. William Penn beat Northeastern 78-67 on Wednesday. It was the Bobcats' first loss of the season.(Photo: Kate Penn/GameTimePA.com)

Even when Kobi Nwandu isn’t playing at his peak, he still finds a way to help Northeastern on the court.

Thus was the case during Wednesday’s game against the William Penn Bearcats. The visiting Bobcats went into halftime trailing 40-27 and Nwandu didn’t have a point. By the end of the game Northeastern put up a spirited second half effort – although eventually falling 78-67 – and the senior guard finished with 16 points.

Nwandu wasn’t the team’s leading scorer, but it was another example of how effective he can be when he’s playing on all cylinders.

“He’s grown a lot in four years," said Northeastern head coach John Eyster.  “He’s a different player than he was as a freshman, but he’s capable of doing a lot. We need him to do a lot.”

In the second half, Nwandu’s athleticism was on display, playing strong underneath the basket and coming up with a big steal to start a rush the other way in the third quarter. He even put up a breakaway slam dunk early in the fourth period.

“He’s pretty versatile,” Eyster said. “His athleticism and his length. He can play a lot of different positions. He had to find himself tonight. He found it and came back out to play the second half well.”

Nwandu, who has 134 total points this season and is averaging about 16 points per game, said he focuses on improving different facets of his game when he is in the gym. Last season, he scored 406 points – good for the team lead in 2014-15 – and averaged 14 points per game. 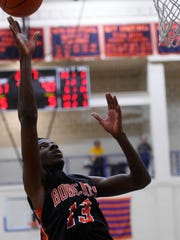 Down low, Nwandu’s size gives him a noticeable presence under the basket. Listed at 6-foot-5, he tries to use that size to be aggressive on the court.

“I just know that I have to go up strong,” he said. “Try to get position. Especially when I’m trying to attack the basket. Just go up, jump as high as I can, try to lay the ball up.”

Wednesday’s loss was the Bobcats' first of the season. They had taken down Division II foes Kennard-Dale, York Suburban, Dover, Susquehannock and Eastern York to kick off the year. They also beat Red Lion and Northern York, but William Penn was the toughest team they were scheduled to face in the month of December.

The Bearcats play an aggressive, uptempo style which is something Northeastern doesn’t see very often.

Nwandu echoed a similar sentiment as his head coach. Northeastern plans on evaluating the tape of Wednesday’s loss and pinpointing what set them off to the slow start that it had.

“At first they extended the lead like, 30-11,” he said. “We have to see what we did to cut the lead. Focus on that rather than what they did to extend the lead, so we can get back on defense and stuff like that. That’s what we have to do first.”