The Spring Grove Rockets defeated the William Penn Bearcats for the first time in over a decade. 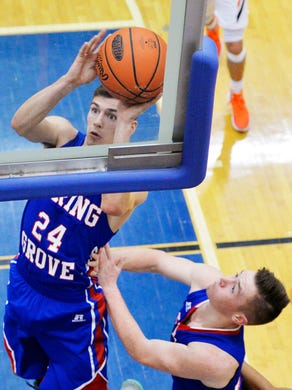 Spring Grove's Darin Gordon goes up for a shot during a December game against William Penn. Gordon excels in his supporting role for the Rockets, playing 'Robin' to Eli Brooks' 'Batman.' Chris Dunn, GameTimePA.com
Fullscreen 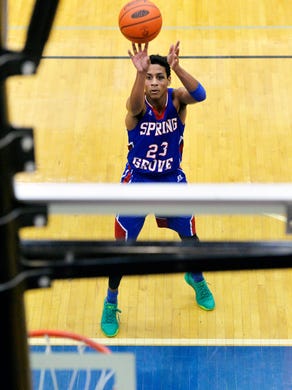 Entering Friday’s night’s contest against William Penn, Spring Grove had not beaten the Rockets' YAIAA Division I foe since the 2001-2002 season. But that changed when the night came to an end, and the Rockets left York with an 84-74 overtime win against the Bearcats.

“We’ve had this group together for a while so this is not unexpected,” Spring Grove head coach James Brooks said. “We took them to a hard game last year and then a back-to-back game, and lost combined both games by 15 points. We knew we could play with them and we capitalized in the overtime. And we came out with the win.”

The matchup went a back-and-forth for the entire game with neither team able to pull away. Through the first four quarters, the largest lead of the game came early in the second quarter after Darin Gordon hit a long-distance jumper to put the Rockets ahead 25-19. The six-point lead stood as the widest differential until the overtime period, when Spring Grove took a 10-point advantage.

By the final minute of regulation, the two teams were back to where they started when the game tipped off. Tied at 67, Gordon broke free in the back court and gave the Rockets a 69-67 lead. William Penn's Jacquez Casiano quickly answered with a bucket of his own to tie it back up at 69, and it went it overtime

From there, Spring Grove outscored the Bearcats by a 15-4 margin in the extra period to earn the win.

“It feels good, but we just have to keep moving on,” said Spring Grove's Eli Brooks, who finished with 34 points. “This isn’t our milestone of going 3-1 and beating (William Penn). We want to do bigger things and better things. Just keep getting better each and every day.”

The Rockets have already had several close games this season. They narrowly fell to Central York, 53-50, in their season opener and beat Dallastown 83-76 in their following game. Brooks said those close contests have helped his team's development.

“Games like this you just have to be locked in mentally for a whole game,” he said. “I just think we are now battle tested on what we’re going to go through and I think the whole is going to be like that all year long.”