For Hanover basketball coach Denny Garman, filling out an NCAA Men's Basketball Tournament bracket was tougher than usual this year.

Primrose, an adorable, adoptable dog from the ASPCA, made her picks for the 2017 NCAA Tournament. Is your bracket better than hers?

For Hanover basketball coach Denny Garman, filling out an NCAA Men's Basketball Tournament bracket was tougher than usual this year.

That's because despite what the experts are saying, Garman can't help but pencil in one team as his national champion pick: Creighton.

Yes, the Blue Jays are only a No. 6 seed. But there's a sentimental reason why Garman is picking them. His former player and close friend, Jordan Martz, is a member of Creighton's coaching staff as assistant video coordinator.

"Every year I pick a bracket, but I've never known someone coaching a team," Garman, who now coaches the Hanover girls' team after previously being a boys' assistant, said. "It's hard for me not to pick Creighton. I've become a converted Creighton fan."

A 2009 graduate of Hanover High School, Martz understands why people from home are in awe of what he's doing. That's because he is, too. After spending last season as an assistant at the Division II level, Martz still has trouble believing he's about to be a part of March Madness.

But when Creighton plays Rhode Island in the first round of the tournament at the Golden 1 Center in Sacramento, California, on Friday, Martz will be trying to help the Blue Jays advance.

"This has been a dream for me, and to live it out is surreal," Martz said. "I don't know what to think, because I'm not sure the Big East Tournament experience has hit me yet. There's some anxiousness, but we're all excited."

Martz's journey from Hanover to Creighton has been a fairly quick one. After a solid career with the Nighthawks, Martz played college basketball as a walk-on at York College. Knowing he wanted to get into coaching, he took a graduate assistant position at Division III Messiah College in 2013.

After two years at Messiah, Martz was able to land an assistant job at Trevecca University in Nashville, Tennessee. Last summer after his first season, Martz was volunteering at a basketball camp in Louisville, Kentucky, when he met Creighton video coordinator Tim MacAllister. He impressed MacAllister enough to be granted an interview for the assistant job, and days later was having lunch with Blue Jays head coach Greg McDermott. 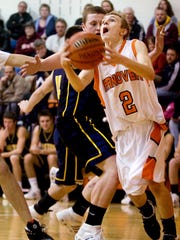 Martz would get the position, and over the past season he's been with the Blue Jays as they've gone 25-9, reached the Big East Tournament title game and made it back to the NCAA Tournament after a two-year absence.

"God has a crazy way of making things happen," Martz said. "I go to a camp with maybe 15 kids, and now I'm on an incredible staff with people that do stuff the right way and enjoy it. They make you feel such a part of everything. And we have the best fans in the country. I'm sure everyone says that but ours are so positive, even when we lose they're telling us to get them next time."

As assistant video coordinator, Martz is in charge of breaking down film of Creighton's opponents so the Blue Jays' scout team can imitate them in practice. He also keeps track of a team's situational tendencies for the Blue Jays to exploit, and helps put together a post-game report after every contest.

Hanover students excel on both field and stage

"I don't know if I've been starstruck, but there are some legendary guys," Martz said. "I think when we played Wisconsin (in the second game of the season), that was the moment I looked around and thought, 'I hope I get to do this the rest of my life.'"

While Martz is living far from home in Omaha, Nebraska, he's been able to see his family and friends, like Garman when Creighton has played at Villanova and in New York for the Big East Tournament. One of his favorite parts of the past year has been sharing the experience with his brother Hunter and sister Avery, who are both current Hanover High athletes.

Jordan Martz poses for a photo with his sister Avery and brother Hunter after Creighton's game at Villanova on Feb. 25. Both Avery and Hunter play basketball at Hanover High School. (Photo: Courtesy of Denny Garman)

For Garman, Martz's development as a coach has come as no surprise. The current Hanover girls' coach said his former player has always been determined in every aspect of his life.

"He stood out as someone who would be successful," Garman said. "When I was coaching with (Hanover boys' head coach) Nate Myers, we had some tough years and Jordan really helped turn that program around. Every year, any time I have an opportunity to make an impact on an individual, I talk about Jordan. It truly is a great story."

While Martz has always dreamed of being a college head coach, he's thankful for where he is right now. And he's hoping Creighton's run in the tournament won't be a short one.

"Every year you fill out a bracket, and to participate in the event is an incredible opportunity," Martz said. "One of the things Coach McDermott does really well is getting us to live in the moment. Not many get this opportunity so you've got to take a moment to smell the court and take everything in."