Delone Catholic was just one quarter away from the district finals and a berth in the state playoffs.

Delone Colleen Anderson watches the ball after she shoots as she is defended by Camp Hill's Passion Bragg in the District 3 Class AA semifinal at Dallastown High School on Feb. 22, 2016. Clare Becker, The Evening Sun
Fullscreen

Delone Catholic's Riley Vingsen drives for the basket as she is defended by Camp Hill's Anne Johnson in the District 3 Class AA semifinal at Dallastown High School on Feb. 22, 2016. Clare Becker, The Evening Sun
Fullscreen

Delone's Katie Laughman looks for a teammate to pass to during the team's game against Camp Hill in the District 3 Class AA semifinal at Dallastown High School on Feb. 22, 2016. Clare Becker, The Evening Sun
Fullscreen

The Squirettes were outscored by 11 in the fourth quarter 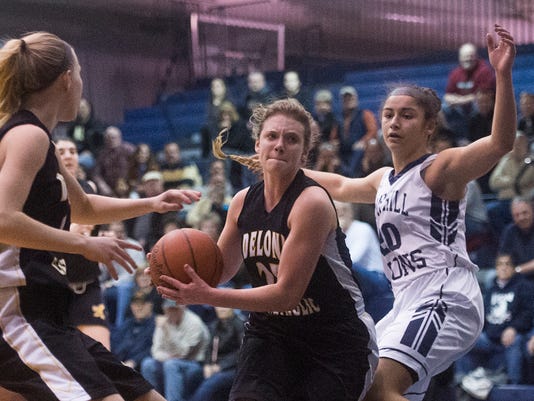 Delone Catholic was just one quarter away from the district finals and a berth in the state playoffs.

The Squirettes led top-seeded Camp Hill by one at the end of the third quarter in Monday's District 3 Class AA quarterfinal game at Dallastown High School. It was a back-and-forth game, but the Squirettes appeared to be in a good position to pull off the upset.

But then the fourth quarter began and everything seemed to fall apart for the Squirettes. The Lady Lions opened the quarter on a 11-2 run and held off Delone down the stretch for a 53-43 win.

While the Squirettes can still make the state tournament if they beat Wyomissing in the district third-place game on Thursday, Delone Catholic head coach Gerry Eckenrode was too disappointed by his team's play down the stretch Monday to even think about that possibility. 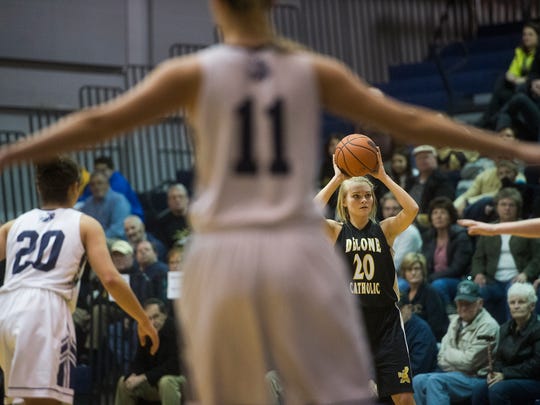 Delone's Katie Laughman looks for a teammate to pass to during the team's game against Camp Hill in a District 3 Class AA semifinal at Dallastown High School on Feb. 22, 2016. (Photo: Clare Becker, GameTimePA.com)

"I'm just very disappointed in our effort," Eckenrode said. "We had some golden opportunities to take advantage of some situations, and we didn't. Our shooting percentage had to be abysmal, our foul-shooting was atrocious and the amount of loose balls that we would usually pick up we didn't pick up tonight. We didn't deserve to win the game tonight."

The Squirettes (18-7) shot just 44 percent from the foul line all game and scored 10 points in the fourth quarter, with four of those coming with the game already out of reach.

But for most of the second quarter, it looked like an upset was very possible. The Squirettes finished the quarter on a 9-3 run and went into halftime up six. 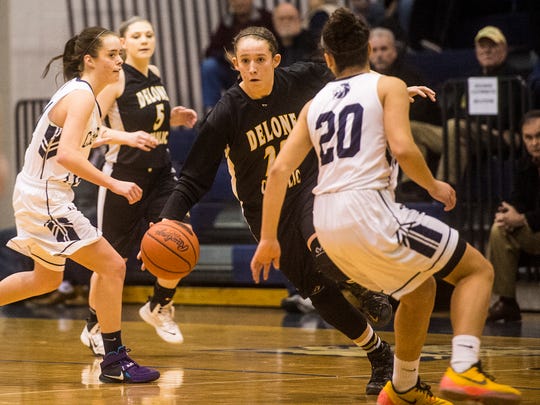 While Camp Hill (21-4) scored the first seven points off the third quarter to retake the lead, Delone fought back and was ahead going into the fourth quarter. But it was then that Camp Hill's Leah Springer and Diamond Bragg took control of the game.

The duo combined for 15 of Camp Hill's 21 fourth-quarter points and each finished the game in double digits. On the other hand, Delone Catholic got a combined 18 points from its three top seniors: Ally Shipley, Katie Laughman and Lilly Singleton.

"Bottom line, when the time came to take control of the game, their two best players stood up and said I'm taking the game," Eckenrode said. "You've got to have people who are willing to lay it on the line, and they had it, and we didn't. That's the way I look at it."

Despite the loss, Delone is still alive and can extend its season with a win on Thursday. The time and location of that game has not been determined.

The Squirettes season ended one game short of the state playoffs last year, and Eckenrode said it's up to the players to decide if they want their fate to be different this time around.

"It's a matter of whether you want to extend your season," Eckenrode said. "It's a gut-check time for them. I'm going to coach like it's the first game of the year because I want to extend my season into March."