When Jon DeFoe and Tom Flaherty became head coaches at Bermudian Springs, Bill Clinton was the U.S. president, Cal Ripken Jr. was manning third base for the Baltimore Orioles and the Ravens had yet to win their first Super Bowl.

There are 23 football coaches in the YAIAA, and 18 of them are in their fifth year or less in that position. 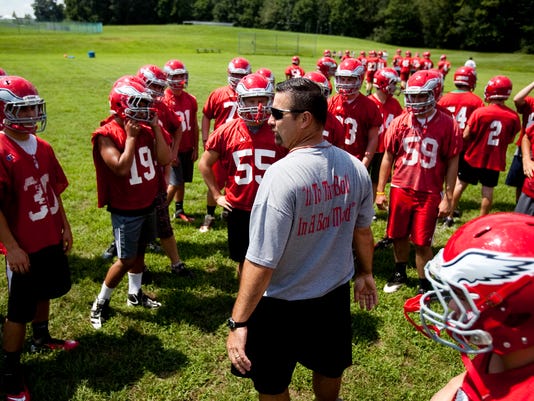 Bermudian Springs head coach Jon DeFoe has led the Eagles for 17 seasons. He's one of just a handful of YAIAA head football coaches who have led their current programs for more than a decade.(Photo: File/GameTimePA.com)Buy Photo

When Jon DeFoe and Tom Flaherty became head coaches at Bermudian Springs, Bill Clinton was the U.S. president, Cal Ripken Jr. was manning third base for the Baltimore Orioles and the Ravens had yet to win their first Super Bowl.

The school's current seniors were either just infants or hadn't been born yet.

DeFoe will be entering his 18th season as Bermudian's head football coach this fall and Flaherty will start his 19th leading the basketball program in the winter. With longtime Central York football coach Brad Livingston dismissed last fall and West York basketball coach Bill Ackerman resigning a few months later, DeFoe and Flaherty are now the longest-tenured coaches in their respective sports.

A decade ago, coaches staying close to 20 years at one school was more common. But that doesn't seem to be the case anymore.

The YAIAA currently has just three football coaches (DeFoe, Mike Lippy of Littlestown and Kevin Myers of Dallastown) who have been at the same school for at least a decade, and there will be 12 coaches starting the first or second season of their tenure this fall. The numbers are pretty similar in boys' basketball, where there are just three coaches (Flaherty, Jeff Bair of Gettysburg and Brian Schmoyer of Dover) who have been at their current job for a decade.

How have DeFoe and Flaherty been able to stick around in a time of constant change?

"I think it's their consistent message," Bermudian Springs athletic director Dave Orwig said. "The comparison I make is to a compass. It always points true north. It can waiver east or west a little bit, but not much. That doesn't mean change can't take place but there has to be consistency going in the right direction. And those two are always consistent with the message they are giving to the parents and the kids."

"Every year, you know (the Eagles) are going to be good defensively and have a bunch of hard-nosed kids," Lippy said. "You never hear anything bad about the program. Jon's one of those old-school guys: fair, honest and upfront. He brings out the best in his kids."

Flaherty's career record isn't as stellar at 171-250. But with him at the helm, the Eagles have become regarded by opposing coaches as one of the most methodical, well-coached teams in the YAIAA. In 2014, they went 22-5 and reached the state playoffs.

But it takes more than a consistent message to last nearly two decades coaching high school sports at one school. You also need support and guidance from the people around you, including family members, school board members and assistant coaches.

And both Flaherty and DeFoe believe they have been extremely fortunate in those areas.

"Bermudian is a unique place with tremendous school board and administration support and that gets overlooked," DeFoe said. "My wife and kids are very understanding. The kids have grown up with (me being a coach) just being part of their world."

Added Flaherty, "I think that we have good, hard working kids in the community, and the people here want to you to stay. My wife and stepdaughter are very supportive. You're away a lot and they certainly take care of things at home and sacrifice themselves."

DeFoe came to Bermudian Springs as a student-teacher and volunteer assistant coach in 1997 before getting the top job two years later, and Flaherty was hired as head basketball coach in 1998 after a stint as an assistant girls' coach at Millersville. He had previously coached at Delone Catholic and led the Squires to a state title in 1989. At the time, both were trying to prove themselves and had no idea how long they would stay.

Neither had an easy time right off the bat. The football team went just 24-26 in DeFoe's first five years as head coach, and Flaherty endured numerous losing seasons trying to build the basketball program into a contender.

But even when the teams struggled, the school remained committed to the pair because of the positives they brought to the table.

"They're two guys that you don’t have to be concerned about being motivated because they constantly motivate the kids to give their best every day," Orwig said. "They never waiver in what's important for the athletes and they're very organized."

DeFoe and Flaherty aren't the only athletic figures at Bermudian with long tenures. Wrestling coach Dave McCollum finished his 38th season this winter, and Orwig has been with the school for 27 years, the past 18 as athletic director.

Those numbers aren't lost on DeFoe or Flaherty, as both know not every administration is as patient or understanding during tough times. The support is especially meaningful to DeFoe, who balances being the high school's principal with being head football coach.

"When you coach, you're not going to make everybody happy but I'm at a place with tremendous belief in what I do," DeFoe said. "You're going to have tough years but there's value in learning through that. The administration has done a great job staying the course because change isn't always the answer."

And how have the two avoided burning out like so many coaches before them?

While they admit it hasn't been easy, both still enjoy working with kids. DeFoe appreciates the release that coaching gives him from his administrative duties, and Flaherty believes he was simply meant to be a coach.

"There are a lot of good people here and that keeps you in it," Flaherty said. "Each year's a challenge but it's what I set out to do and it's the profession I'm in. I have not grown tired of it or stopped trying to improve."

Added DeFoe, "I love the game and what it stands for and teaches about life. I'm in a community that sees hard work and appreciates it. There’s an understanding that consistency and continuity are characteristic traits. The school has a belief in that."