Despite some chilly weather, the YAIAA had a busy sports schedule Tuesday.

Despite some chilly weather, the YAIAA had a busy sports schedule Tuesday.

In a matchup of undefeated boys' lacrosse teams, West York's Cody Richter broke through York Catholic's defense to score his sixth goal and the game-winner in the Bulldogs' 12-11 victory. West York is now the only undefeated team remaining in the YAIAA. ... Red Lion's Sam Emig scored seven goals in the Lions' 14-6 victory against Spring Grove.

Cody Richter's sixth goal of the day was the one that sent the Bulldogs home with a win over York Catholic.

West York's Paige Weekly hit her third home run of the year as the Bulldogs defeated Spring Grove, 2-1. ... Littlestown's Amanda Dyson and Emily Lanahan each went 4-for-4 with a double in Littlestown's 17-1 win against York County Tech in five innings. ... York Suburban's Olivia Eytcheson threw a three-inning no-hitter with three strikeouts as the Trojans defeated Biglerville, 21-0. 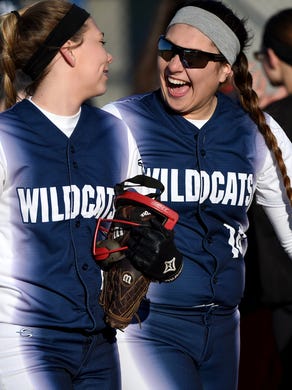 Dover's Kirstyn Swancer is all smiles after hitting a triple during the Wildcats' 8-1 loss to Dallastown on Tuesday. Jason Plotkin, GameTimePA.com
Fullscreen

Dallastown's Krista Flemmens is tagged out at home by Cierra Hockensmith during the Dallastown's 8-1 victory over Dover on Tuesday. Jason Plotkin, GameTimePA.com
Fullscreen

Dallastown's Lyndee Anders attempt to tag out Cierra Hockensmith as she successfully slides back into second base during Dallastown's 8-1 victory over Dover on Tuesday. Jason Plotkin, GameTimePA.com
Fullscreen

Dover's Taylor Lamparter was the starting pitcher during the Wildcats' 8-1 loss to Dallastowns on Tuesday. Jason Plotkin, GameTimePA.com
Fullscreen

While trying to keep warm, Dallastown outfielders, from left: Kayla Flemmens, Madison Johnson and Krista Flemmens do jumping jacks in between innings during the Wildcats' 8-1 victory over Dover on Tuesday. Jason Plotkin, GameTimePA.com
Fullscreen

New Oxford's No. 2 singles player Josiah Forry picked up a win in the Colonials' 5-2 victory against Spring Grove.

Hanover's Hunter Martz adjusts his hat as he walks by the dugout April 5, 2016 during the game against Eastern York at Hanover High School. Clare Becker, The Evening Sun
Fullscreen

Ethan Smith swings the bat during the game against Eastern York on April 5, 2016 at Hanover High School. Clare Becker, The Evening Sun
Fullscreen

Eastern York's Drake Renn arrives on second base as Hanover's Mikey McDaniel reaches for the ball during the game on April 5, 2016 at Hanover High School. Clare Becker, The Evening Sun
Fullscreen