A familiar face around the YAIAA football scene will be back on the sidelines in 2016-17.

Russ Stoner, who spent 20 years coaching at Central York and Spring Grove before taking last season off, was approved by the York City School District Wednesday to be William Penn’s next head football coach.

"One of the very first questions I was asked in the interview process was why did I want to coach at York High?" Stoner said. "For me, it doesn't matter who you talk to in the York area, everyone has someone in the family from York High. It's my home city and my home city's team. I have a lot of family who went to York High. That was a big draw and obviously the talent level that has been through York High is another draw. It's definitely the job I wanted."

Stoner, who was a star running back at West York in the 1980s, spent 16 seasons as an assistant under Brad Livingston at Central York before taking over the head coaching position at Spring Grove from 2011 to 2014, where he went 18-25, 7-15 in four seasons. The Rockets reached the postseason twice under Stoner and won the YAIAA Division I title in 2012 after going 1-9 in his first season. 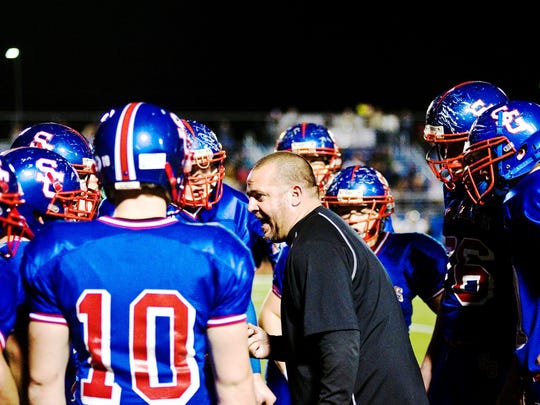 Russ Stoner, who was 17-25 in four seasons at Spring Grove, will take over a Bearcats team that went 0-10 last season. (Photo: File, GameTimePA)

Stoner will step into a fragile situation at William Penn. After having a strong run during the late 2000s under Matt Ortega, the Bearcats have taken a step back in recent years. Shawn Heinold went 17-44 in six seasons, capped off by a tumultuous 2015-16 season that saw William Penn go 0-10. The 2015 team finished with a minus-24 turnover ratio, lost by an average of 35 points per game, and totaled less than 1,500 yards all season on offense, which put them dead last in the league. It was the worst season since the Bearcats joined the league in 1981. Seven of their losses came by 27 points or more.

'What happened to York High pride?'

"First I want to meet with the kids," Stoner said of his to-do list after taking over. "Fortunately I've met a few of them through the clinics I hosted this winter. We're going to need to get to work right away in the classroom, weight room and the field. Our players and coaches aren't going to have a lot of down time...Football is my biggest passion. I love working with the kids, taking a group of people and striving for a common goal. The wins and losses aren't what I'm looking for. I'm looking for all the little things that add up to wins and losses."

Hiring Stoner is a check on the first to-do list box for William Penn's new athletic director Ron Coursey, who was approved in February. His next task will be finding a new basketball coach.