Shippensburg’s coaching staff is high on West York grad Cash Gladfelter, who has flashed potential in his freshman season on campus. His recent move from shortstop to first base has paid dividends, manager Matt Jones said.(Photo: Submitted) 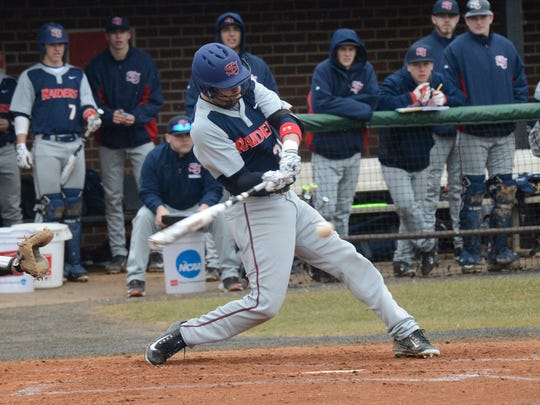 No, that's not a YAIAA all-decade list. That's part of a typical lineup card for Shippensburg University baseball manager Matt Jones this season.

The Red Raiders have built a pipeline to York County with six former YAIAA stars and a Northern York grad making up the core of their roster.

And for their part, the York County products have represented the area well. Spangler (Spring Grove), Allison (Central York), Hoiles (Spring Grove) and Grant Hoover (Dover) have each started all 10 games so far.

Hoiles, a sophomore, leads the team with a .343 batting average and seven RBIs. Gladfelter (West York) has drawn extensive praise from his coaches while starting eight games and transitioning from shortstop to first base as a freshman. Allison and Hoover are both hitting .333. Tyler Betz (Northern York) has started five games, and Tyler Butcher (Dallastown) has made three appearances out of the bullpen.

"Some days we go York County right through the middle of the lineup," Jones said of his seven York County players. "We put them all together and see if they can make some magic."

To put Shippensburg's York County connection in perspective, the other 15 teams in the PSAC have a combined three YAIAA players — half of Shippenburg's York delegation.

"It's a newer thing," Jones said. "When I first got here, we didn't get a lot of York County guys. The first guy was Austin (Allison) and he was a walk-on who just kept getting better and better. Then we went after (Dalton) Hoiles and (Nick) Spangler pretty hard. Spangler was playing travel ball with Grant (Hoover) so we saw him, and an old assistant found (Tyler) Butcher when he went to see the Spring Grove guys. That's kind of how the York County dominoes fell."

Each of those dominoes will be a key part of this year's success, and with six of the seven being sophomores or freshmen, the York products will be a major part of the team's future as well, Jones added.

"Five guys from one area in the starting lineup shows how York County can produce great athletes," Allison said. "It's pretty neat to see younger guys coming from there and seeing your hometown produce guys who can play at the next level."

"Dad" of the team

Jones credits Allison, the fifth-year senior who the underclassmen playfully refer to as "Dad," with guiding the younger York guys and helping them prepare to play right away.

"He's not afraid to let them know what's going on and what the expectations are," Jones said.

"He (Allison) has definitely slowed the game down for us," Hoiles added. "As a freshman, I didn't have much experience in the outfield. I was playing left field beside him in center, and he taught me the difference between high school and college baseball. He took us under his wing and we look up to him. He took us in and showed us how to do it."

The former walk-on is simply trying to set a good example, he said, because he has five years worth of experience to share with the young guys.

"Some of these guys do say they look up to me," Allison said. "So I try to set a good example. With some things I stumbled on when I was younger, I can take that experience and help them learn and be better baseball players." 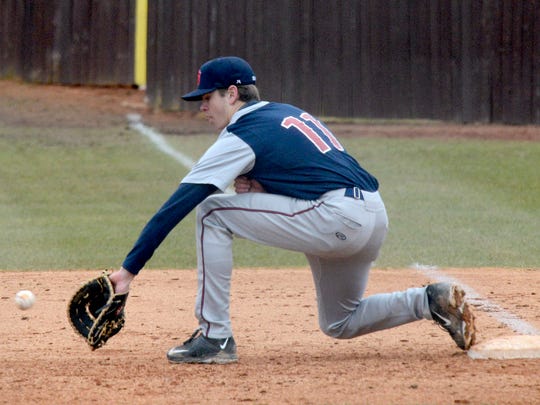 Shippensburg’s coaching staff is high on West York grad Cash Gladfelter, who has flashed potential in his freshman season despite making a move from shortstop to first base. (Photo: Mike Slade, Shippensburg University)

Many athletes and sports teams use the word "family" when talking about teammates, but Shippensburg has a legitimate claim to the family label. Their families carpool to away games in North Carolina, Delaware and West Virginia, Jones said. And most of the York players have played with or against each other since middle school, Hoiles added.

"We created a bond that never separated us," Hoiles said. "It's pretty cool because you play in high school with them and know most of them since we were young. It's even cooler to be here with them at the next level."

Hoiles and Spangler both sent congratulatory text messages to Gladfelter — the youngest of the York family — the day after he committed to Shippensburg, which made him feel like part of the family right away.

"Coming here the seniors made it a pretty easy transition," Gladfelter said. "The older guys don't treat us any different, they accepted us right away. It's just a great group of guys. It's kind of weird seeing all the York County guys I played against and were rivals with, (we are) all here together. But now we're all close friends."