When the York Suburban Cheerleaders tried to make their way home from a 2013 trip to Walt Disney World in Florida, they found themselves stuck in the Sunshine State for an extra night.

Gabrielle Leiphart, Madi Elliott and coach Leslee Yoder are excited about cheering at the Citrus Bowl and mentoring the next generation of cheerleaders at Suburban.

Coach Leslee Yoder talks to her team about its impending trip to the Citus Bowl following Monday practice at the school.(Photo: Paul Kuehnel/GameTimePA.com)

When the York Suburban Cheerleaders tried to make their way home from a 2013 trip to Walt Disney World in Florida, they found themselves stuck in the Sunshine State for an extra night.

The team was returning from performing in the Walt Disney World Christmas Day Parade and the northeast was being hit with snow, which resulted in a canceled flight. The Suburban cheerleaders were only stranded an extra night, but they’re hoping to avoid the travel headaches when they return from their New Year’s day performance at the Citrus Bowl in Orlando, Fla. later this week.

The Suburban cheerleaders are performing with a number of other high school squads during the pregame show leading up to the Michigan vs. Florida 1 p.m. bowl matchup. The Suburban cheer team won the opportunity during a summer National Cheerleaders Association camp competition. While the event will not be televised, it's an opportunity for the program to perform on a another big stage.

“I’m excited for it,” said senior co-captain Madi Elliott. “It will be different from the parade and excited to be in the football stadium. Get the opportunity to cheer with these girls.”

Coach Leslee Yoder talks to her team about its impending trip to the Citus Bowl following Monday practice at the school. Paul Kuehnel/GameTimePA.com
Fullscreen 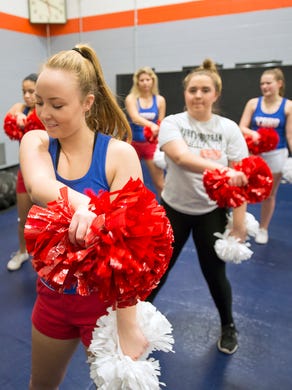 The trip will be Suburban’s fifth with the NCA. They’ve performed twice at the Orange Bowl (2006 and 2008) and twice at the Christmas Day Parade in Walt Disney World (2011 and 2013). The 10 cheerleaders who will grace the field at Orlando Citrus Bowl Stadium on Friday are members of the school’s football cheerleading squad.

Five of the girls going this year made the trip to Disney two years prior, according to head coach Leslee Yoder. That experience is something Yoder feels will help them on this trip.

“I think it does ease their comfort since they know what to expect,” she said. “This one is a little bit different. The other one from Disney they would have participated in was along Main Street. So there was people crowded along Main Street. This is going to be in a great, big, giant stadium…

“I think this is going to be a lot different than performing in a high school stadium for them. But I think they’ll do fine.”

For senior co-captain Gabrielle Leiphart, Friday’s pregame show will be a way for her to reach her dream of performing in a college-level stadium.

“I don’t plan on continuing my cheerleading career after high school,” she said. “To be able to be in a college level (stadium) it’s going to be an experience of a lifetime.”

The girls held their final practice Monday before leaving for Florida early Tuesday morning. Due to the chaotic schedule for the basketball teams, finding time to practice the routine has been challenging. Suburban was sent the routine four weeks ago by an outside cheer organization called Varsity.

There are practices scheduled every day leading up to the performance on Friday and the girls also have the chance to enjoy the theme parks at Walt Disney World during their down time.

With a majority of the girls on the trip being seniors, the Citrus Bowl performance will likely be their final cheerleading act in high school. It will also be one of their final bonding trips with their fellow York Suburban cheerleaders.

“This is kind of the last cheer-related thing I’ll do in my lifetime,” Elliot said. “Especially with these girls that I’ve been cheering with since middle school. It’s special to be able to go through it with them.”