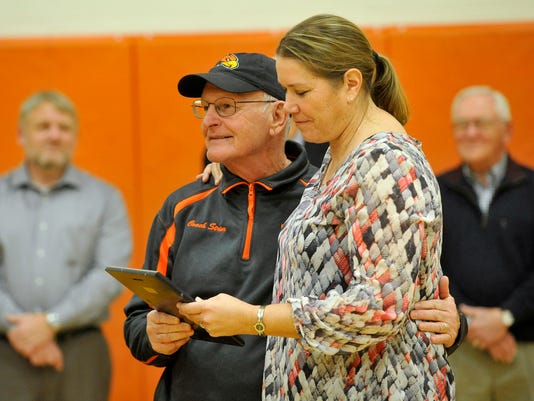 Betsy Witman, right, keeps looking at her plaque as she and her former coach, Don Strine, pose for pictures after she was inducted into the Hanover Athletic Hall of Fame at Hanover High School on Monday, Dec. 21, 2015. (Photo: Jason Plotkin, York Daily Record)Buy Photo

After nearly 100 years of athletics at Hanover High School, a Hall of Fame now exists inside the school to honor the greatest athletes, teams and coaches to come through the district.

Small plaques of seven athletes, one coach, one team and two contributors hang on the wall outside the gymnasium, and all of those men and women were honored with a brief induction ceremony before Hanover's boys' basketball team defeated Harrisburg Academy, 59-48, Monday.

Each inductee was announced individually, with the inductee or members of their family walking onto the court to receive a larger plaque while fans, other families and the current Nighthawks' players and coaches cheered.

The loudest ovation came for Betsy Witman, a 1983 graduate who scored 1,404 career points in basketball and now coaches the York College women's basketball team. Witman, one of the two living inductees, received her plaque from her high school coach, Don Strine, who is still involved with the Hawkettes program and attends almost all of Witman's York College games. Witman's parents, who still live in Hanover, were on hand for the induction, as was her former point guard Misti Wildasin.

“I think it’s great," Witman said of the creation of the Hanover Athletic Hall of Fame. "I think it’s about time, about time. Last year, my dad was inducted into the Spring Grove Athletic Hall of Fame, and at that time I wondered why Hanover doesn’t do something like that. There’s so many great athletes and coaches to come through Hanover High School. It’s a real honor to be part of this inaugural class.”

The other living inductee to receive a plaque was Wilbur Gobrecht, a 1948 graduate who starred in football, basketball and track and field. Gobrecht was also one of four living members of the 1947 football to attend the induction ceremony, along with former teammates Dick Reese, Richard "Chub" Gruver and Ed Aumen.

That Nighthawks team was the first Hanover team to go undefeated and untied, outscoring its opponents, 270-48, along the way. While reliving those days with his former teammates at a reception before the induction ceremony, Gobrecht said he believes its the best team Hanover has ever fielded in any sport.

“We all worked together very hard," Gobrect said. "From the first day we went to fall camp at Farmer’s Grove, we had a passion to be very good. Everybody got together and worked hard and it happened.” 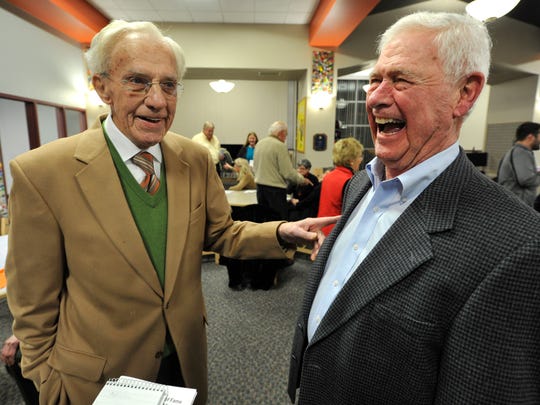 Wilbur Gobrecht, right, reacts to the comments of former teammate Dick Reese during a reception for the duo, who were part of the inaugural inductees into the Hanover Athletic Hall of Fame at Hanover High School on Monday, Dec. 21, 2015. The two were inducted as part of the 1947 football team and Gobrecht was inducted for his individual achievements.  (Photo: Jason Plotkin, York Daily Record)

Athletes Merle Miller (class of 1928), Albert "Bud" Musselman (1945), Bob Forry (1957), Dave Rodman (1958) and Jim Heilman (1960), as well as former football coach Steve Padjen, were all posthumously inducted. Family members for each of them were on hand to receive the plaque, with Rodman's two daughters each traveling several hours from North Carolina and South Carolina.

“We were really touched that he would be one of the first inductees," said Amy Rodman Elliot, who traveled from South Carolina. "It’s always been fun to hear about his (athletic feats) and to meet his friends and other classmates and hear them talk about it.”

Contributors Lawrence B. Sheppard and Clinton N. Myers, for whom Sheppard-Myers Stadium is named, were also announced as members of the inaugural class.

The inductees were selected by a 10-person committee that includes former Evening Sun sports editor Jack Lefevre, Hanover girls' basketball coach Denny Garman and current school board member Brian Frederick, who is a former Hanover High School Athletic Booster Club president . The committee met every two to four weeks since last spring to select the inductees and plan Monday's event with the inductees and their families, Frederick said.

The district plans on adding about five inductees to the Hall of Fame every two years, Frederick said, but they were OK with the initial class being as large as 10.

“It just so happened that when we voted there was a really clear line after 10 that it was clear it wasn’t worth trying to pick and choose from those 10," Frederick said. "It just became the obvious choice.”

The idea for an athletic Hall of Fame started with a conversation between Hanover Public School District Supt. John Scola and former athletic director Jeremy Flores, Frederick said. They brought the idea to Frederick and the booster club, and Frederick suggested they also involve the alumni association to help with selecting the inductees.

"If there's one thing about Hanover and being a Hanover Nighthawk, it's that the tradition here is so strong," current Hanover boys' basketball coach Nathan Myers said. "Some of their bios were extremely interesting to listen to. I thought that was fantastic, and there was a very nice crowd for that." 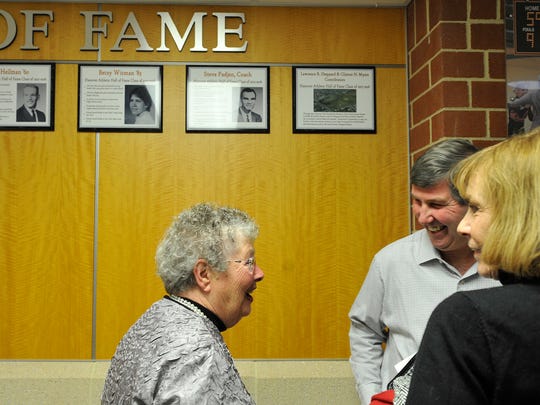 Hall of fame committee member Connie Hoke, left, jokes with Debbie Hansford and her husband Randy by the photo of Debbie's father Steve Padjen, a coach who was part of the inaugural inductees into the Hanover Athletic Hall of Fame at Hanover High School on Monday, Dec. 21, 2015.  (Photo: Jason Plotkin, York Daily Record)