Coach Frank Landis has resigned after just two years at the Cougars' helm.

Check out the top five plays from around GameTimePA.com from the week of April 10-16. 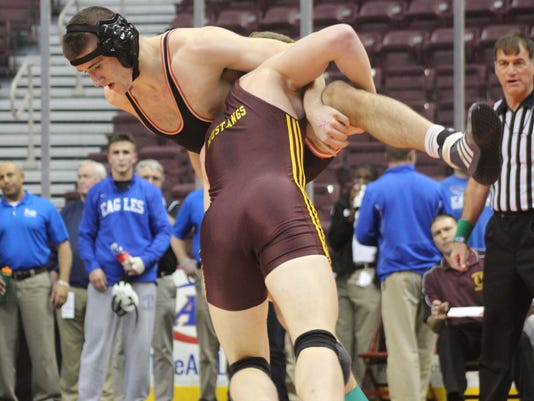 Leo Higgins of Palmyra tries to fight off a takedown attempt during a District 3 Class 3A 182-pound semifinal bout this year. Higgins was the Cougars' only wrestler to qualify for states.(Photo: Kerri Fleegle, For GameTimePA.co)

It hasn’t been a great offseason for Lebanon County wrestling, as a second coaching vacancy has emerged.

After learning Cedar Crest would not renew the contract of former coach Barry Spohn, GameTimePA.com has learned that Palmyra is also searching for its next coach.

Weidler says Landis took a full-time teaching position at Big Spring, which may also include a role in the Bulldogs' wrestling program. It’s unknown as to what that possible role would be.

Weidler says this was actually something he knew was coming, knowing Landis’ employment circumstances.

“Ideally, he would’ve gotten a job at Palmyra, but that didn’t come to fruition,” Weidler said. “In the beginning of the season, he (Landis) didn’t want to put us in a position where we would be scrambling for a coach, so he stayed a year for us. I certainly understand his reasoning. He did a solid job for us. But now it’s back to the drawing board.”

Like Cedar Crest is currently experiencing, Palmyra has had a low interest level in wrestling the last few seasons.

The Cougars did see their numbers improve this past season. They were almost able to send out a full lineup, after having only nine participants the season before.

But as Weidler remains concerned about the overall future of the program, he also expressed a lot of concern for the sport itself, having been once been a wrestler.

“To this generation, it doesn’t want to put in the hard work,” Weidler said. “No. 1, I’m a little concerned about the sport itself because it’s the toughest sport a kid can get involved in.”

So just like Cedar Crest AD Robert Snyder, Weidler, obviously unhappy with the program’s state, says finding a coach who can find a way to increase participation on the mat will of course be one of the top qualities he evaluates.

Weidler said having a presence in the youth program is the most critical task of the next coach in trying to end what’s been the center of the program’s participation issues.

“I’ve been part of the elementary program - they come in and use the high school room - and there’s a good amount of kids there,” he said. “So it’s the retention and the transition from elementary, to the middle school, to the high school where we haven’t been able to retain those kids.”

While low numbers have obviously reflected in the standings, Palmyra wrestling did see a little bit of success through senior Leo Higgins’ exciting 27-7 senior season. He earned fourth place in the District 3 Class 3A Tournament at 182 pounds, earned his first trip to the PIAA Tournament and went 2-2, finishing one win shy of a medal.

Though maybe using Higgins’ success story as a possible motivation to try to retain participants and/or attract newcomers, Weidler says finding overall stability is still the first dose of medicine to better the health of the program.

“It’s not one of the more high-profile sports at Palmyra,” Weidler said. “When you win, kids come out. My philosophy is you can’t put together a district contender in one year. You have to take incremental steps. That’s why I’m looking for a program builder to get kids excited about the sport.”