NL wrestling keeps it close with No. 20 team

Just call it another stretch of unfamiliar territory conquered by the Northern Lebanon wrestling team.

NL wrestling keeps it close with No. 20 team 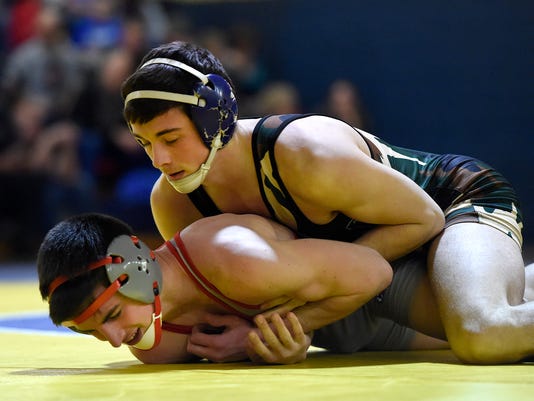 Just call it another stretch of unfamiliar territory conquered by the Northern Lebanon wrestling team.

After dropping its first dual meet of the season to Central Dauphin at Donegal on Saturday in what coach Rusty Wallace described as an uncharacteristic performance, the Vikings had to quickly rebound for a date with the No. 20 team in the country, Hilton (N.Y.) High School – on a loftier stage at Cornell University.

Oh, and NL had to start out with a six-point deficit due to a forfeit at a weight class (99 pounds) they don’t have.

And once again, the Vikings wrestling program proved why it is elite, going toe-to-toe with Hilton in a 38-35 loss Sunday, with many of its blue and gold faithful making the trip as well.

Even though winning and losing wasn’t first on the agenda, Wallace was still very pleased with how his team wrestled after a lackluster performance less than 24 hours prior.

“We had a rough day Saturday,” Wallace said. “That was probably the first time in years where I'd say we under-performed. The kids responded and wrestled really well Sunday. Just knowing we had an opportunity to win made it pretty worthwhile.”

The chance for a monumental win was definitely there for the taking, with NL leading 35-24 heading into the 182-pound bout, normally where Luke Funck has wrestled. But sticking with their plan, Wallace moved Funck up to 195 so he could get a chance to face Lou Deprez, ranked No. 1 in the country.

Even though the result was a 19-4 technical fall for Deprez, Funck was still happy to go through a humbling match.

“I’ll always remember that,” Funck said with a smirk. “The first time ever getting tech falled is ridiculous. It felt like my freshman year coming into wrestle with the seniors. It was awful, but now looking back on it, I’m glad it happened. It woke me up. It was definitely a good learning experience to know how good kids out there are and how much better I have to get.”

Funck also embraced the challenge of wrestling in a higher weight class.

He said, “I don’t mind bumping up. It’s basically the same as 182 … you’re just facing heavier and stronger kids.”

Another Vikings wrestler who had one of the bigger challenges of the day was Brandon Breidegan at 113, facing No. 5 Greg Diakomihalis at 113.

Though he also suffered a 20-5 technical fall, Breidegan says there was a lot to take away from the match.

Breidegan said, “I was a little nervous, but it was kind of fun because he really didn’t go for the pin right away. He worked with me and let me up a few times. He wasn’t really active like I’ve seen with really good wrestlers in the past. Whatever he did was really smooth and quick. It was fun wrestling him.”

One other notable match, which resulted in a win for NL was Trevor Leonard at 132, upsetting previously undefeated Austin Hertel in a 6-4 decision.

One wrestler the Vikings did not get the chance to face was Yanni Diakomihalis, a two-time world champion as a senior, who was unable to go Sunday.

For the team as a whole, Wallace was particularly happy about how his team also responded when their strengths were taken away early.

“Just fight for every point. I thought we did a good job of that,” Wallace said. “They were very good at defending our tilts, which is what we get a lot of mileage out of, so it forced us to do other things … run some bars, run some cradles. It was nice to see our bread and butter get shut down, but then see our kids be able to score in other ways. That was a big positive.”

The fact that the Vikings were as successful as they were even raised their opponent’s eyebrow.

“They complemented us tremendously,” Wallace said. “Their coach commented several times about how tough we were from the top position with our turns. We rode a lot of their good guys. It was a really good dual meet.”

Besides individuals gaining valuable experience, Wallace says the biggest takeaway also came from a team standpoint, which came at a good time with districts not too far way.

“It showed the importance of team wrestling,” he said. “Up until this point we really haven’t had to focus a lot on that, where you had to shave bonus points, needing to get a pin or a major, and needing to not get pinned. That really hasn’t been a conversation we had to have.

"But with districts around the corner, we’re going to be in some matches where team wrestling is going to be huge. I like the fact we got to wrestle Central Dauphin and Hilton back-to-back, because it gave us the sense of the types of things we need to improve on for the postseason.”