The Vikings bolt to 30-0 lead and hold off 5-time defending champion Boiling Springs, 39-25 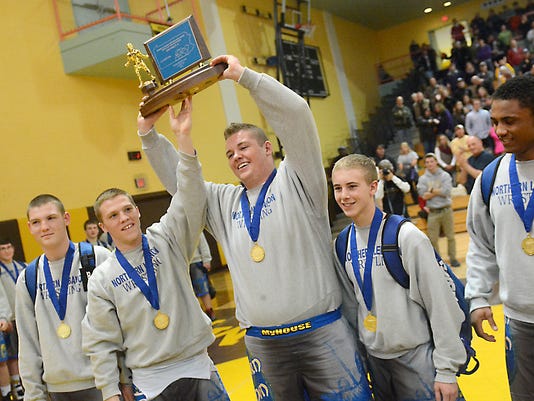 But this is a team with higher goals than you might expect, and by the time practice starts Monday afternoon you can bet these Vikings will have refocused on something much more significant.

It was the Vikings' first district mat title, and the first for any county team.

"We didn't really mention Boiling Springs or districts in practice at all," NL coach Rusty Wallace Jr. said. "Our focus is on Giant Center and finding a way to win four matches there. This (today) was A goal, but not THE goal."

The Vikes (17-1) begin their quest for a PIAA team title on Thursday morning at Giant Center against the winner of Monday's preliminary round match between the District 7 runner-up and the third-place team from District 10.

On Saturday, Northern Lebanon was at its best, jumping out to a 30-0 lead and getting a crucial pin at just the right moment to stem a Bubblers' comeback.

Wallace said, "I don't think we could have wrestled any better. On paper, we may have had the perfect match. We won the flip, the start was good and we came up big in some situations when we had to."

None bigger than at 132 pounds. Boiling Springs (12-2) had shaved the Vikings' lead to 30-14 with five bouts left and, with some good wrestlers coming up, the Bubblers still had a legitimate chance.

But Leonard stopped that thinking in a hurry. He gave up the first takedown to Cameron Palmer, but quickly reversed to tie it 2-2. Nearing the end of the first period, Leonard used a tilt to put Palmer toward his back, and with 12 seconds left he stuck him for a pin.

"I don't have any words to describe how I felt after that," Leonard said. "With all the emotions going on and the fans screaming, and then the way my teammates greeted me ... it was great.

"I was a little surprised I pinned him with a tilt, but I did pin a guy earlier this year in one. I just didn't know right away that it was a pin."

That made the score 36-14. Boiling Springs essentially needed pins in each of the last four bouts to pull it out, and it was not to be. When Blaise Bressler lost only 8-4 to AJ Kostyak at 145, Northern Lebanon had wrapped it up.

The Vikings' Luke Funck said, "Leonard's pin was huge. It was basically a toss-up match, but when he got the pin, we pretty much knew we'd win."

"We knew they were going to bump (Ott) up for that match," Thompson said, "and I knew I had about 60 pounds on him. So I was just trying to take advantage of when he missed his opportunities."

Thompson got a takedown early and a reversal in the second to lead 4-0, then hung on for dear life.

Rusty Wallace said, "When we got the flip and knew we were starting at 170, that was a good thing. We were favored in the first few bouts up to 106, but George's was a toss-up. That win was really big."

Now it's on to even bigger things for the Vikes.

Notes: Stephen Herb also captured a win for NL, a 9-3 decision at 152 ... In the first six bouts, the Vikings had eight takedowns to one for the Bubblers; in the last eight bouts, Boiling Springs led 21-4, with all four by Herb. 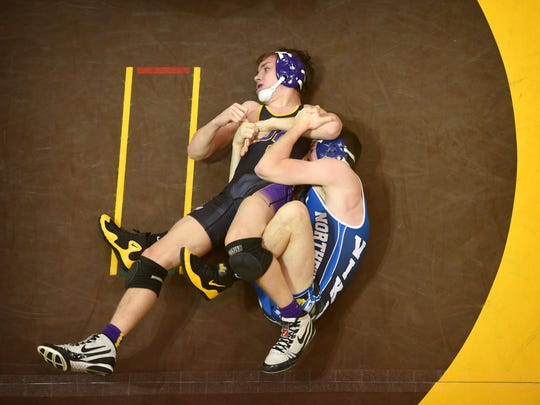 Trevor Leonard's pin of Cameron Palmer of Boiling Springs at the 1:48 mark in the 132-pound bout proved to be the key victory for Northern Lebanon in its district title win over Boiling Springs on Saturday. (Photo: Michael K. Dakota. GametimePA)