FREDERICKSBURG – The plan was always to return to the District 3 team wrestling championship.

FREDERICKSBURG – The plan was always to return to the District 3 team wrestling championship.

In fact, they accomplished quite a bit.

But at the beginning of a season filled with plenty of expectations, the the first goal on the checklist is now staring the Vikings directly in the eye.

After dispatching of Camp Hill and Hamburg by a combined score of 121-13, in the quarterfinals and semifinals of the District 3-AA team championships at Northern Lebanon High School, the Vikings will step on to the mat opposite Boiling Springs in a rematch of last season’s title match. Boiling Springs handled Annville-Cleona and Bermudian Springs in other action on Wednesday night.

The 50-point victory for the Vikings is the largest margin of victory in the Class AA semifinals in the history of the championships.

It was a season ago Boiling Springs handed Northern Lebanon a 52-15 defeat in the 3-AA championship.

Saturday morning’s title match will get underway at 10:30 at Milton Hershey’s Spartan Center.

Boiling Springs will be chasing its sixth straight district team championship. As was the case a season ago, Northern Lebanon is after its first.

“We worked really hard for this and the guys wrestled a lot of really tough kids this year, they didn’t shy away from a tough schedule. We just sort of knew that this time of year our tough schedule would show. I think it did tonight,” Wallace said. 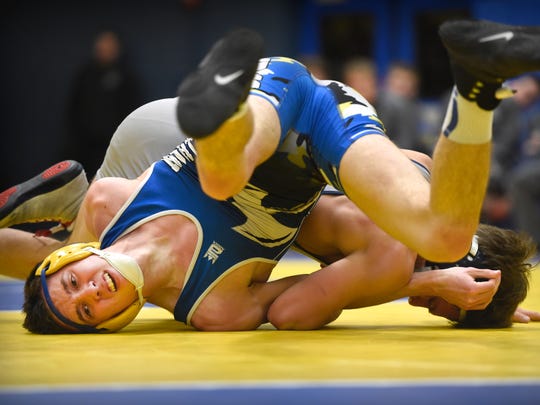 Northern Lebanon wasted little time against Camp Hill in the quarterfinals, getting pin fall victories for Matt Vines at 220 and George Thompson at 285 and a technical fall by Kyle Anspach put Camp Hill in a hole they could not recover from as the Vikings won 62-4.

With the semifinals starting at 285, Thompson picked up a critical early 5-1 decision over D.J. Gromlich. From there, a work-man-like effort from Anspach, pushed the lead to 6-0, Breidegan picked up a tech fall victory over Owen DeTurk and it was all Vikings from that point on.

The match of the night came at 195 in the semifinals when Luke Funck worked overtime to dispatch Iggy Reynoso, after Reynoso forced overtime late in the third period.

Funck worked quickly to gain the advantage in overtime and pulled out a 9-5 decision that drew a standing ovation from the packed house at Northern Lebanon.

Wallace said Funck needed to be tested and wrestle from behind. Overall, the Vikings are in a better place than they were a year ago headed toward the same goal against a familiar opponent.

“I think our mental approach right now is pretty good,” Wallace said. “Our guys really want it. Our guys want to be successful. Our guys work so hard. We came into the room Monday after we won the L-L’s and that was probably the hardest practice of the year, we didn’t back off because we did anything.

“They just continue to accept it and work hard and they got a lot of things left they want to accomplish. I know it sounds a little cliché but we’ve just go to keep getting a little better every day and just fix the little things as we go.” 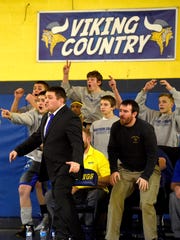 The Northern Lebanon wrestling team had a lot to be excited about on Wednesday night, rolling over Camp Hill and Hamburg to earn a spot in Saturday's Class AA district title match. (Photo: Michael K. Dakota, Michael K. Dakota, GametimePA)