LANDISVILLE - They started it with a bang and they ended it with one. 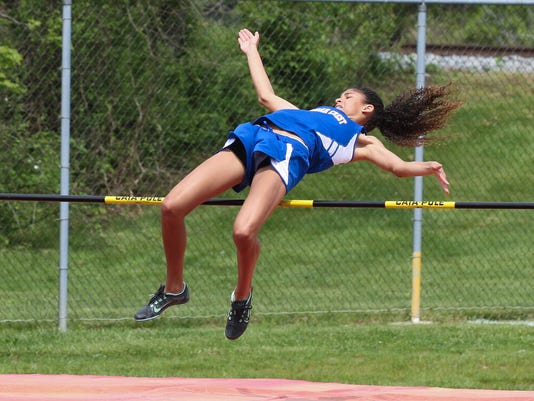 LANDISVILLE - They started it with a bang and they ended it with one.

In between, Lebanon County competitors brought plenty of thunder and lightning too, while flooding the Lancaster-Lebanon League Track and Field Championships with six gold medal-winning performances.

By any measure, the county enjoyed a wildly successful L-L meet this year, particularly on Saturday when they wore out a path to the medal stand - and snared half a dozen golds - on the second and final day of competition at Hempfield High School.

The Cedar Crest boys 3200 relay team of Bryce Vukovich, Matt Royer, Nick Blandy and Jesse Cruise opened the day with a gold, and Elco's 1600 relay quartet of Ryan Rolon, Colton Lawrence, Blaine Troutman and Austin Eldridge capped it with a successful title defense in the final race of the day.

The relay triumphs sandwiched a pair of individual victories from Cedar Crest girls' standout Ariel Jones in the high jump and long jump, as well as impressive wins from Lebanon's Jesse Brownstein in the boys pole vault and fellow Cedar Derin Klick in the boys 800 meters.

Ariel Jones wins the high jump in a jump-off for the title, clears 5-2. pic.twitter.com/ehWH5cGstC

And oh, by the way, the Cedar Crest boys and girls each secured second-place finishes in the team standings.

To summarize, if you blinked on Saturday you missed a Lebanon County kid getting a medal put around their neck or celebrating some sort of personal milestone or team victory.

Jones was the county's individual headliner, following up Friday's runner-up finish in the triple jump by justifying her top seed in the high jump and adding a surprise win in the long jump after entering as the No. 6 seed.

The soft-spoken junior cleared 5-2 and survived a jump-off with runner-up Trinity Bitting-Ellis of Warwick to win the high jump, then crushed her previous best in the long jump with an untouchable leap of 17-9 1/4 that netted a second gold.

"Tiring," said Jones with a smile of surviving the jump-off in the high jump. "Really tiring. I knew if I made a mistake I would go from first to second. But I knew if I got into it a little more and got my confidence up I could get it."

"I love to see what students-athletes can do when they get to that next level," Bare said of Jones. "We've had kids over the years that just take their game to the next level and Ariel's obviously one of those girls that can do that. A personal best by more than a foot (in the long jump), that says it all."

Meanwhile, Brownstein and Klick flew the flag for Lebanon High with a pair of terrific efforts. Brownstein cleared 13-6 on his last try to defeat a talented field that included defending champ and runner-up Damian DiAngelis of Northern Lebanon and teammate Huy Luu, and Klick wired the field in a scorching 1:54.60 to win his second straight L-L 800.

"It's a pretty good feeling," said a beaming Brownstein, a senior who stands just 5-foot-3, but is much taller with a pole in his hands. "And going up there at my height against the other guys makes it feel like even more of an accomplishment. My last time being here, it's nice to finish strong."

For his part, Klick both started and finished strong, charging to the front and never relinquishing the lead after winning from behind with a strong finishing kick last year.

Derin Klick of Lebanon crushes the field to win the 800. pic.twitter.com/BbGie4Zida

"I've been working really hard. We've been doing a crap ton of speed stuff to strengthen me," Klick said. "Before I used to not be a front-runner, but my coach changed that. He taught me it's not a race you can win from the back. I tend to not think about anything when I run, not even the guys behind me."

The Cedar Crest 3200 and Elco 1600 relays had a lot of people chasing them - but not catching up - on Saturday. 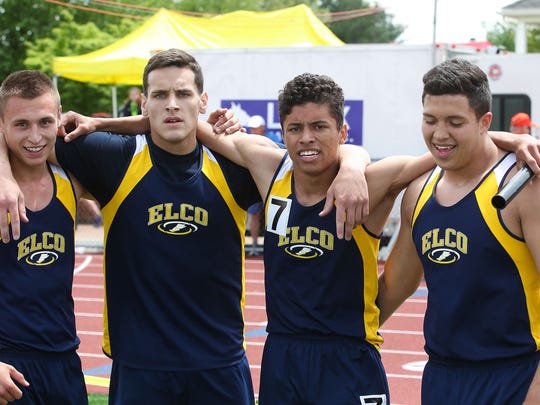 Royer's strong second leg was the key to the win for Cedar Crest, as was Jesse Cruise's blistering anchor leg that clinched the crown.

"There were two guys out in front, so I had to go get them," Royer said. "I felt good, so I decided to keep going."

Elco's win was the happy culmination of an L-L season that began with the relay well off its best form and ended with it back where it was a year ago - at the top of the medal stand.