For almost six long years, victory proved to be elusive for the Lebanon Catholic softball team. 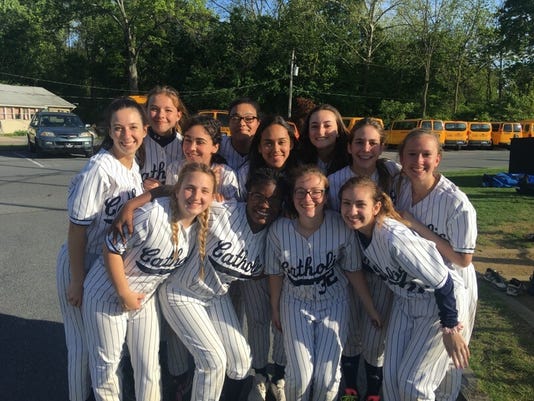 The Lebanon Catholic softball team was all smiles after ending the program's 105-game losing streak with a 24-6 win against Antietam on Wednesday.(Photo: Photo courtesy of Kerry Long)

For almost six long years, victory proved to be elusive for the Lebanon Catholic softball team.

Game after game, year after year, one lopsided defeat after another piled up, each one stinging the Beavers psyche and spirit in ways only they could fully explain.

Then came Wednesday, a day this year's Lebanon Catholic squad won't soon forget. It was the day the 2017 Beavers became the ones to finally end the interminable losing streak, snapping it at 105 - yes, 105 - with a 24-6 regular season finale win at Antietam.

It was the program's first taste of victory since May 26, 2011, when the Beavers defeated Berks Catholic 13-11 in the District 3 Class 1A semifinals.

The streak is dead. Long live the new streak, which will stand at one in a row and be uninterrupted for at least another 10 months.

"You really don't appreciate winning like we did  last night until you lose 105 in a row," said Kerry Long, Lebanon Catholic's head coach for the last 12 years. "The best part is we end the season with the possibility to have a winning streak to start off the 2018 season. It will take a lot of hard work, but that's what's great about having dreams, sometimes they come true."

To be fair, Antietam pitching helped the Beavers' cause on Wednesday quite a bit, issuing a staggering 25 walks to Lebanon Catholic hitters. But Catholic still more than earned its coveted win with 10 hits, three of which came from winning pitcher Hannah Callihan, and a seven-run outburst in the top of the 3rd inning that turned a 5-4 deficit into an 11-5 lead that continued to grow until a nine-run fifth brought the mercy rule into effect and assured victory. 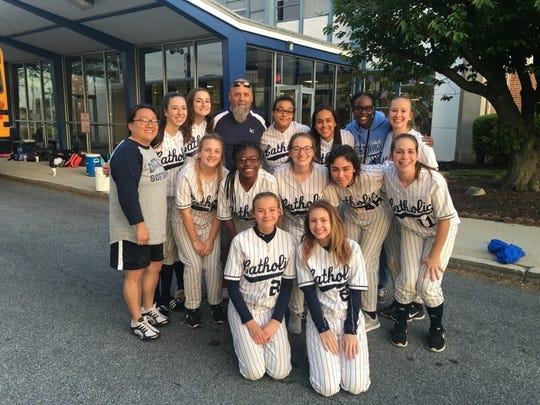 Lebanon Catholic's players and coaches pose in front of the school after returning from Wednesday's 24-6 win at Antietam that ended the softball program's 105-game losing streak. (Photo: Photo courtesy of Kerry Long)

Defensively, heroics came from left fielder Faith Kostow, whose leaping grab in the bottom of the third thwarted an Antietam rally and gave the Beavers an early chance to celebrate, and freshman shortstop Abrianna Eisenhauer, whose catch and throw of a ground ball deep in the hole between third and short ended the game.

"She didn't realize she caught the ball until she looked into the glove and proceeded to jump for joy," Long said of Kostow's catch. "The whole team rejoiced - I was no exception - so much so that we missed the opportunity to double up the girl returning to second who was all but on third when the catch was made. It felt like this was a turning point for us."

Time will tell if Wednesday's win was just a happy isolated incident or a beginning of a turnaround for the long-struggling program. Either way, the Beavers plan to bask in the glory for a while.

Can you blame them?

"Total happiness, the kind of response that makes you understand why we go out everyday and put ourselves through the beat downs, and people saying we don't belong in Lancaster-Lebanon League," Long said, referring to the reaction to Kostow's catch but also the win in general. "We play for the opportunity to find joy in doing things that we think are impossible, for the right to dream. And even though the odds are stacked against us, we deserve the opportunity to surprise ourselves and others and achieve the impossible."