It was two weeks ago when the Elco girls soccer team had earned an unprecedented accomplishment of a perfect regular season to go along with a Section 3 title.

Highlights of Elco girls soccer's season-ending 1-0 loss to Manheim Central in the District 3 Class 3A Quarterfinals. 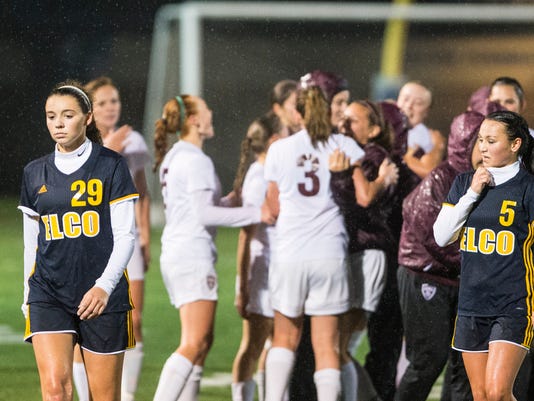 Elco's Emily Bidelspach and Lily Collins, as Elco fell to Manheim Central 1-0 in the quarterfinals of the District 3 Class 3A tournament on Thursday, Oct. 27, 2016.(Photo: Jeremy Long, Lebanon Daily News)

It was two weeks ago when the Elco girls soccer team had earned an unprecedented accomplishment of a perfect regular season to go along with a Section 3 title.

But since then, it’s felt like a different world.

A first-round L-L Tournament exit, and then the Raiders still did not play their best in having to survive underdog Twin Valley Monday in the first round of the district playoffs.

Though they played a much better game Thursday in the District 3 Class 3A quarterfinals, Elco’s luck ran out, falling 1-0 to Manheim Central at Cedar Crest High School’s Earl Boltz Stadium.

Elco goalkeeper Emma Strickler just misses the ball that would find the back of the net for Manheim Central's winning goal as Elco fell to Manheim Central 1-0 in the quarterfinals of the District 3 Class 3A tournament on Thursday, Oct. 27, 2016. (Photo: Jeremy Long, Lebanon Daily News)

After both teams created many scoring chances throughout, the Barons finally were the ones who capitalized, as Taylor Hess found space and sneaked her shot past Raiders’ goalkeeper Emma Strickler to the far post in the 67th minute.

“I thought we turned the ball over and then a couple passes later, she hit a nice shot. What are you going to do?” said Elco coach Derek Fulk. “It’s just one of those things where good teams capitalize on your mistakes and that’s what happened.”

Elimination this early in the postseason, along with just missing at least a PIAA Tournament berth again, is certainly a very disappointing ending to a season after being 18-0.

“It’s disappointing because of what we did in the regular season, but I feel bad especially for our seniors. They’ve had a great career at Elco and it’s tough to see them leave. They don’t have anything to be ashamed of. They did some outstanding things here,” Fulk said.

Fulk however, still knew the road ahead was going to be difficult in moving up a classification.

“I’m not trying to belittle being in Class 2A, but for us, being the smallest school in Class 3A, obviously I think it’s going to be difficult for us to advance to play some of these bigger schools, and Manheim Central’s a very good team," he said. "They’ve been here before and know the ins and outs of advancing. But it’s a good experience for our kids, though. Hopefully we can build off of it for next year."

“But we still played much better than we did the other night. We were focused and into the game, and we played hard. That’s exactly what I wanted to happen.”

But it’s not like the Raiders didn’t have their fair share of chances, including seven free kick attempts and one corner kick in the first half alone.

Considering the Raiders’ high expectations coming into the postseason however, it’s easy for one to conclude maybe the concept of trying to do too much affected their play.

“Maybe the first game, yeah, but I thought we were pretty relaxed and played well in this game. I think maybe the first game playing at home, I think we might have put a little extra pressure on ourselves,” Fulk said. “But it’s still a situation of win or go home, so there’s got to be some pressure. I was still very happy with the way we played.”

Now having experienced the highest of highs and the lowest of lows, Fulk hopes it fuels returning players for another big run.

“Going 18-0 is unbelievable and difficult to do, because obviously you need things to go your way,” Fulk said. “Hopefully our kids have a taste for what it’s like. Two years in a row we’ve gotten one step away from qualifying for states. Hopefully that will motivate the kids to see if next year maybe we can do it.”