Supremely skilled, focused and decisive, Elco girls soccer standout Ryelle Shuey seems to instinctively know what needs to be done when she's on the pitch.

Elco's Ryelle Shuey, center, verbally committed to Lehigh on Wednesday, with a month still to go before the start of her junior season.(Photo: Jeremy Long, GameTimePA.com)

Supremely skilled, focused and decisive, Elco girls soccer standout Ryelle Shuey seems to instinctively know what needs to be done when she's on the pitch.

In short, she just has a feel for what's right when it comes to making important on-field decisions.

She appears to be similarly blessed off the field, based on an important choice she made earlier this week.

With the start of her junior season still more than a month away, the Raiders' high-scoring junior forward already has her college future set after giving a verbal commitment on Wednesday to continue her soccer and academic careers at Lehigh University.

The driving force behind Elco's back-to-back Section 3 titles the past two seasons, Shuey, scorer of 42 career goals to date, also seriously considered Virginia Tech and the Naval Academy, among others, but found an undeniable comfort level with Lehigh that simply couldn't be matched elsewhere.

"The process came really quick for me," Shuey said on Friday morning. "But I'm just really relaxed now, knowing that I can just work and get better toward that goal (of playing college soccer), so when I get there I'm prepared.

"I've been to various colleges, but when I stepped on the campus it just felt like home to me. The coaching staff and the players on the team were so welcoming, they made me feel comfortable. And they just have so much to offer student-athletes. It's a great education."

The early commitment also lifts a great weight off of Shuey's shoulders, one that would only become more burdensome had she delayed the decision until this coming school year or next.

"Getting your name out there and stuff, it's hard getting recognized," she said. "Once schools were contacting me it got easier, but also harder and more stressful. Because when I got to the point of picking, I was like, 'Wow, this is gonna be my life for the next four years. I really need to take everything into consideration.' But when I made that decision I was so relieved. I'm really looking forward to being on campus now and being a student at Lehigh." 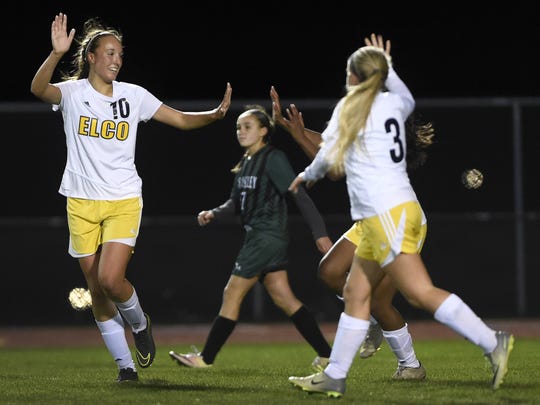 Shuey, who suffered a serious ankle injury during basketball season but is now fully recovered, had the opportunity to make her college choice so early because of her stellar first two seasons at Elco. As a freshman, she tallied 18 goals while helping the Raiders to the Section 3 crown and a berth in the District 3 2A semifinals, then followed that up by tying a single season school record with 24 goals as a sophomore as Elco again claimed the section and advanced to the 3A district quarterfinals.

In her two seasons at Elco, the Raiders have posted a combined record of 35-8-1.

"Growing up, I always just dreamed of playing soccer in college," Shuey said. "When the process started to happen, I was like, 'Wow, this is coming really fast.' I never really expected it to be this early. It's really incredible the way things are nowadays. It's crazy to think about."

Still more than a year from having to put her commitment in writing, Shuey could change her mind and opt to attend another college. She acknowledges the reality of that, but seems to have her sights squarely set on Lehigh, which went 11-5-2 overall last season and 5-3-1 in the Patriot League.

"I mean, there is that possibility. But no, I definitely want to go to Lehigh," she said. "I want to be a Mountain Hawk, there's no doubt about it in my mind. I absolutely just loved it there. It's unbelievable, the opportunities they have to offer."

A humble sort, Shuey also understands the importance of feeling comfortable and supported as a student-athlete. She's felt it during visits to Lehigh and experienced it firsthand at Elco, crediting her coaches, teammates - including rising junior defender Julia Nelson - and her family - parents Ed and Ashley and brother Reese - with helping her get to the point she arrived at on Wednesday when she made her commitment.

"I just want to thank everyone that's helped me, from a little girl on up," Shuey said. "No matter what sport it would have been, just for believing in me and supporting me and guiding me through everything."